The next morning, after having tossed and turned all night thinking about what he should do about his unfortunate love triangle (and, oddly, after being encouraged to look at his own relationship by Kyungri of all people), Matthieu decides to call Maciej, his boyfriend, and invites him over to discuss where they stood. 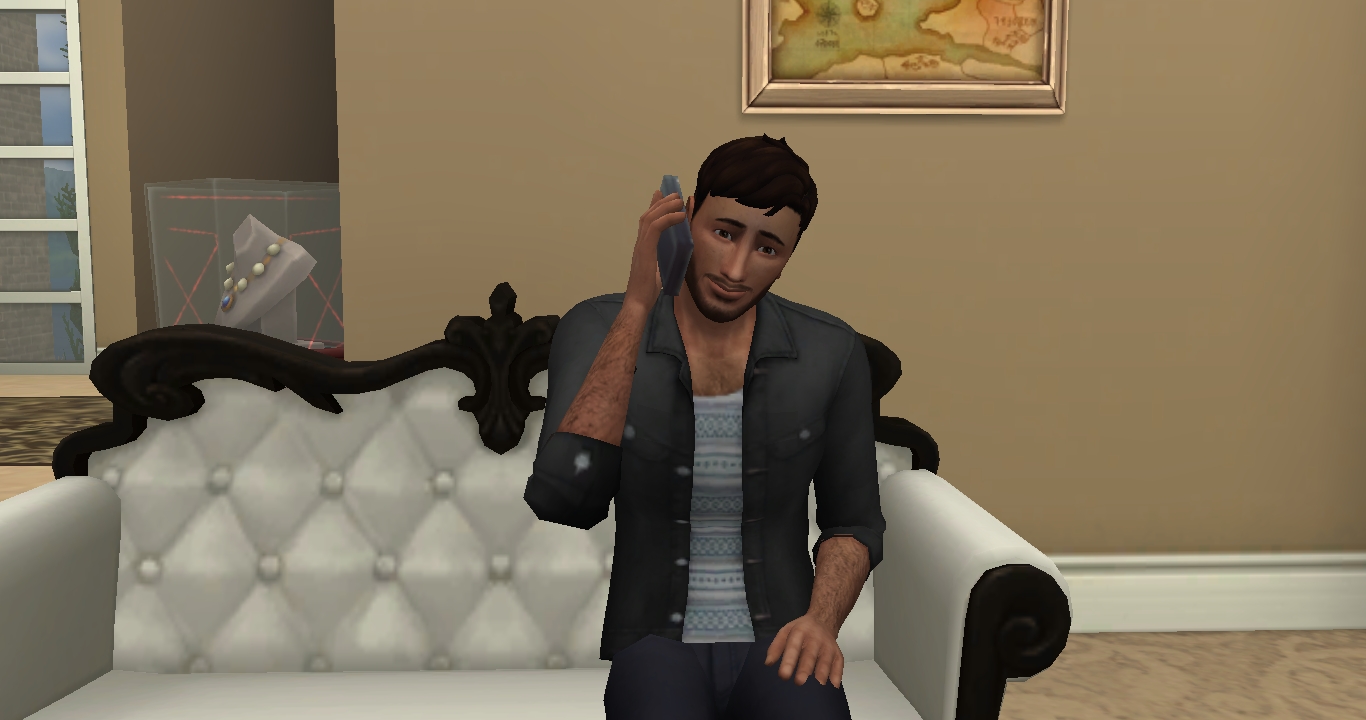 Maciej soon comes over, and Matthieu takes him to a secluded spot close to the house. They talk about the events that transpired last season. Long story short, Maciej wasn’t quite faithful when he entered the house and met all the attractive castmates, and Matthieu watched everything unfold on TV. Matthieu argues that on top of that, he doesn’t want to be in a throuple with Maciej and his friend, Qykoz. 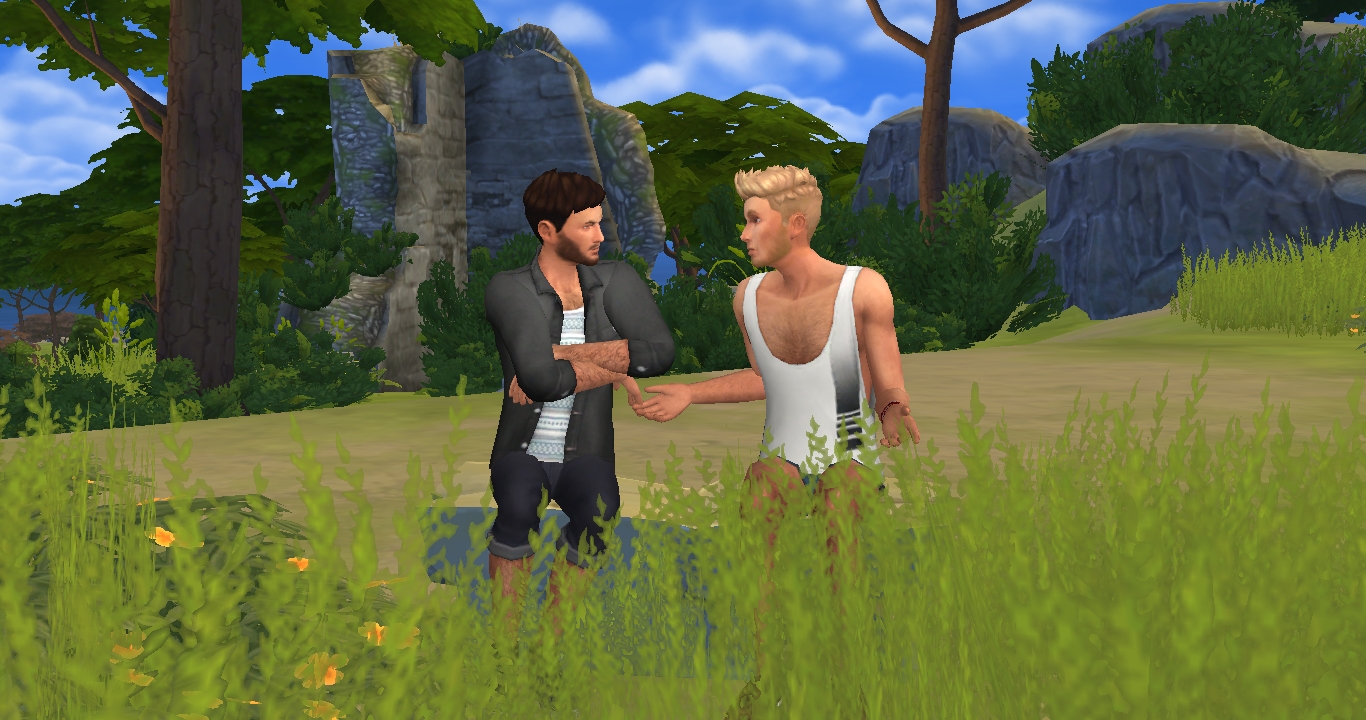 Matthieu: I didn’t think I could ever forgive you, you know. After all that you did last season, and you were the first to be eliminated! Who knows what you would have done if you had stayed for longer…

Maciej: Babe, I told you that it’s no longer like that! I was tempted, and it just happened.  You’re in the house now, you see what the environment is like!

Matthieu: Yes, but it still hurts to see that you couldn’t just accept that you had made a mistake back then… instead, you’re almost proud of your reality TV persona! And then, to make things worse, you propose that to fix things we should “spice up” our relationship by bringing someone else in? I don’t even like your friend! And now I’m in a throuple with you and him?

Maciej: OK, so what do you want me to do?

Matthieu: You either want all of me and only me, or we’re over. I can’t deal with this any longer. I’m here in this house but I still don’t see why you decided to ruin what we had by seeing someone else.

Maciej: So I’ll break up with Qykoz! It’s over, babe. It’s just you and me now! I promise that it’s going to be so good from now on.

Matthieu: Oh… really? Wow… that’s….. not what I expected to hear.

Maciej: What, did you think I could leave you? 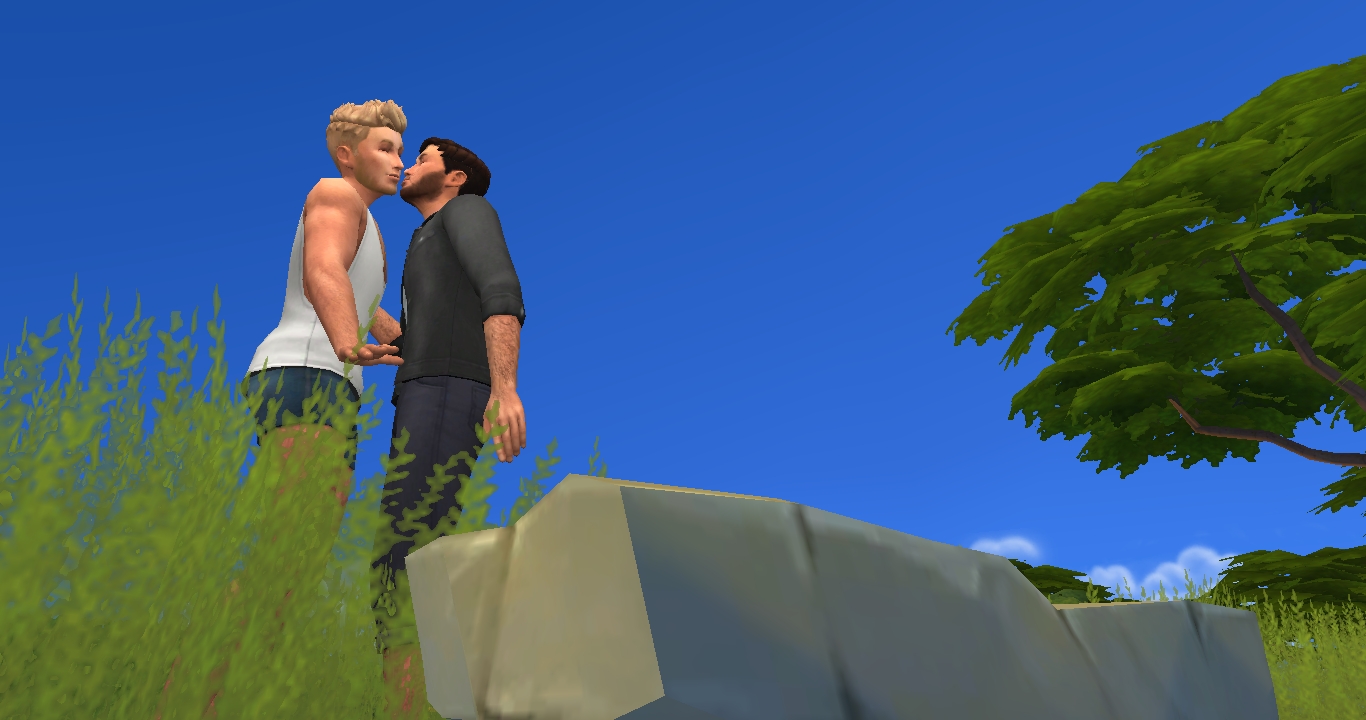 After Maciej leaves, Matthieu is torn and with a heavy heart. He was so sure he was going to break up with Maciej and leave that weird three-way relationship, but he thinks he still loves Maciej and can’t find the guts in him to dump him, even though he’s quickly developing feelings for Harrison. 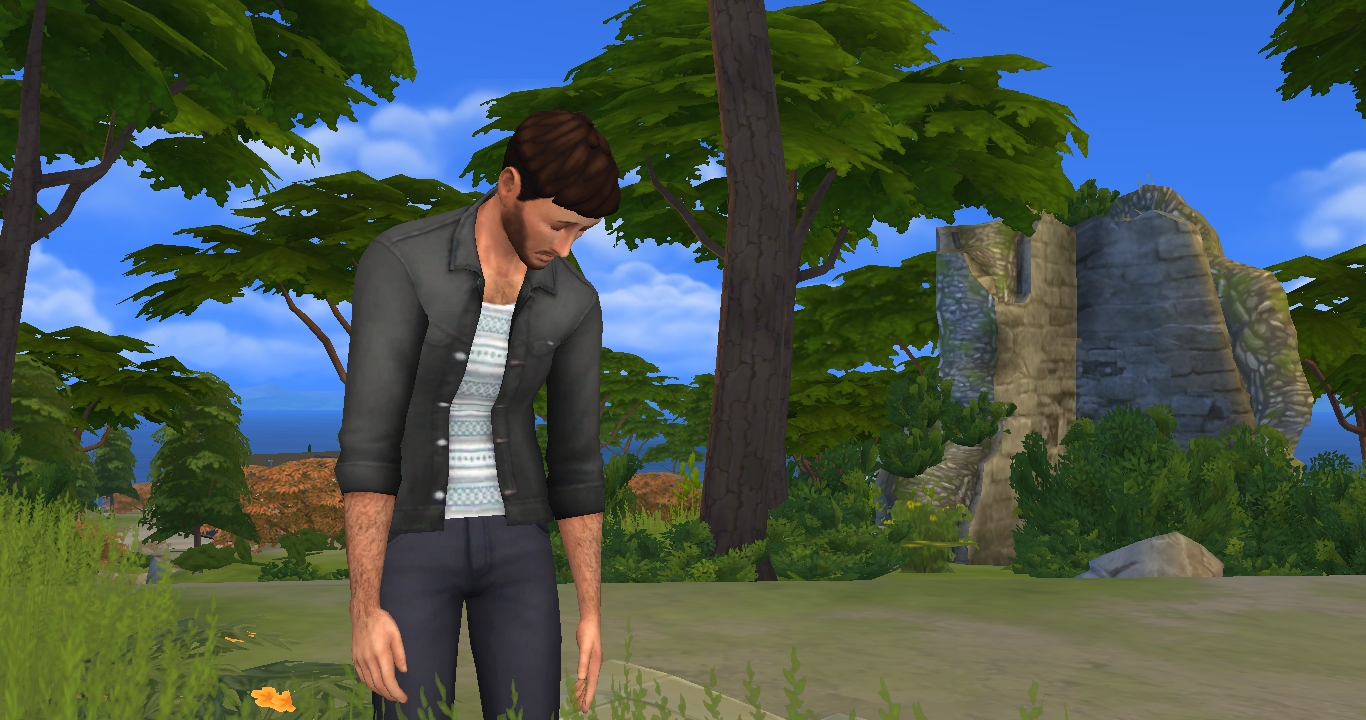 Matthieu stays outside for a while longer until he hears the bell signaling the first challenge and, shaking himself off, goes inside the house.

ajmkv: Housemates, welcome to your first challenge! For this test of your charisma, you’ll be doing a round of speed-dating, spending only 10 minutes with each partner: you’ll have 5 minutes each to speak. Try to impress each partner, because at the end of the challenge you will all cast your votes about who you found the most charming, and the person who wins the challenge receives immunity from elimination this week and a 5000 simoleon shopping spree at Galeries LaSimyette. Remember: be yourselves, drink at the open bar, and make an impression on your housemates and on the viewers! Good luck to all of you! 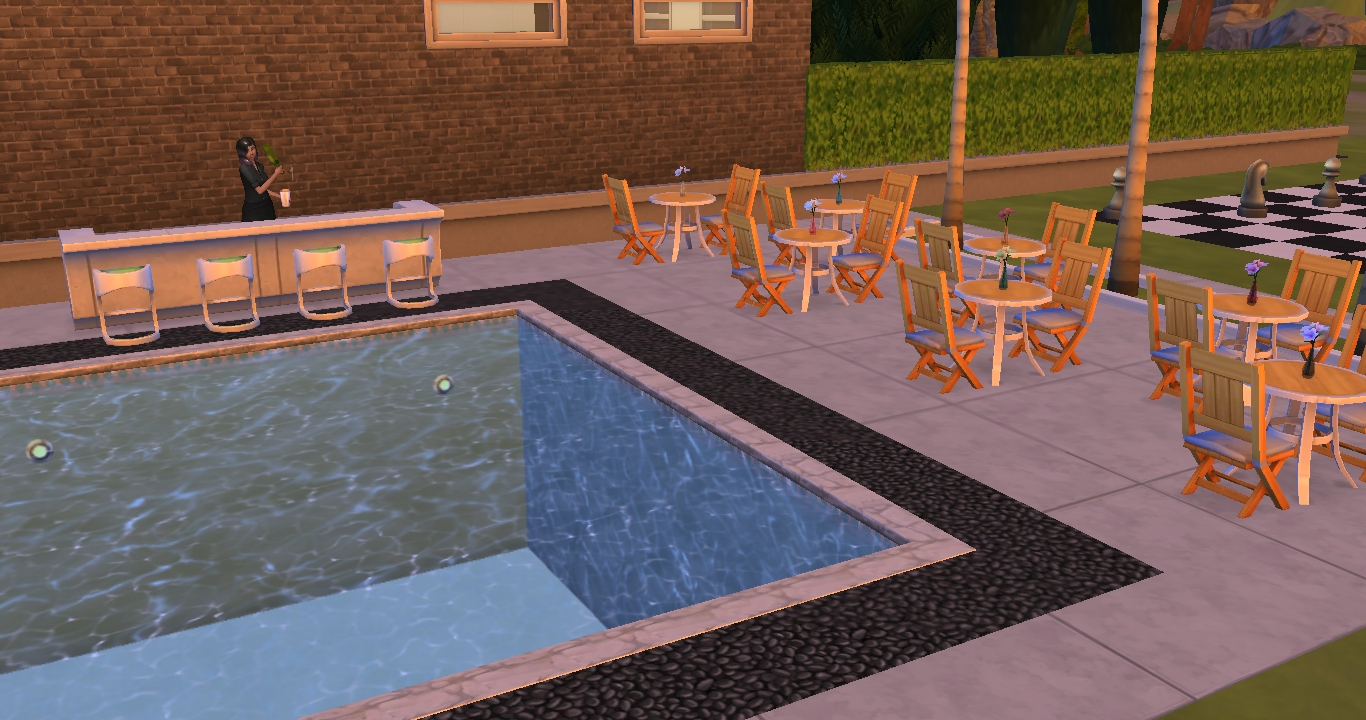 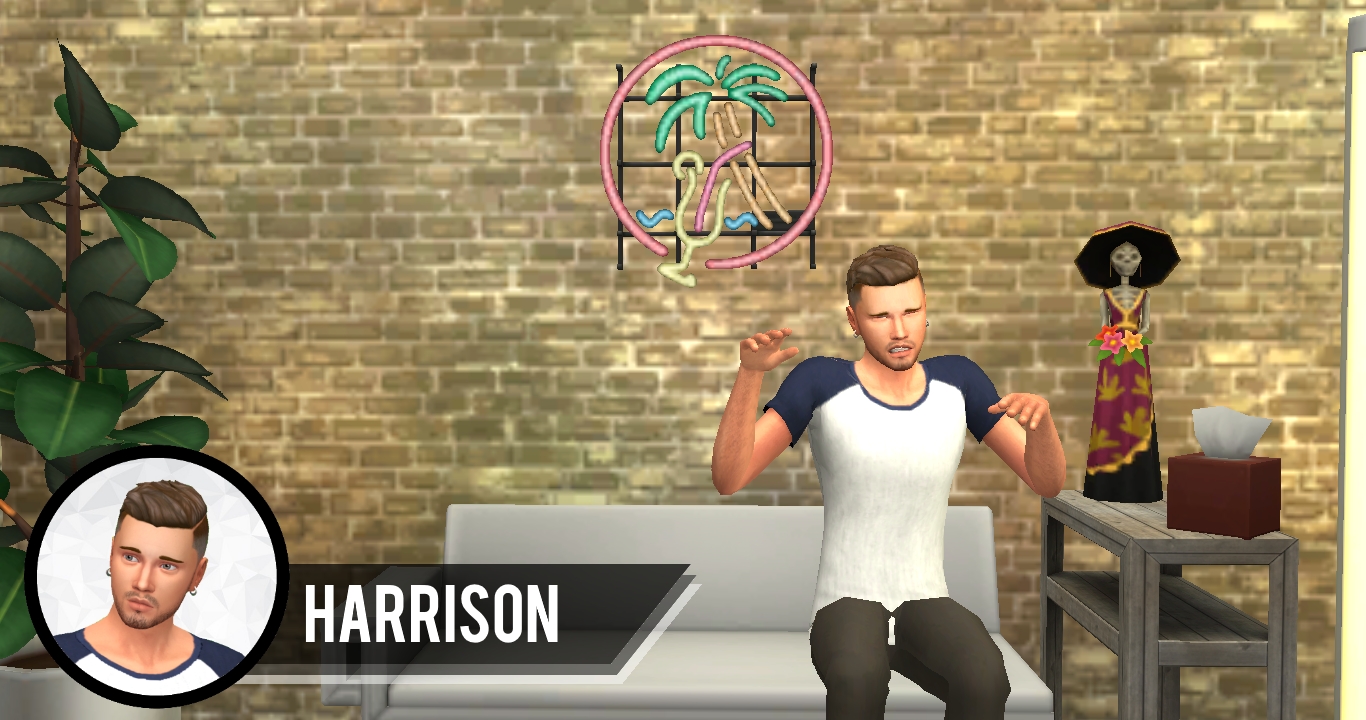 Harrison: Uhhhhhhhhh, I really don’t think I can do a good job with this! Five minutes with each person is not enough. And I’m still nervous about seeing Matthieu after last night… *sighs and looks at the ceiling*. 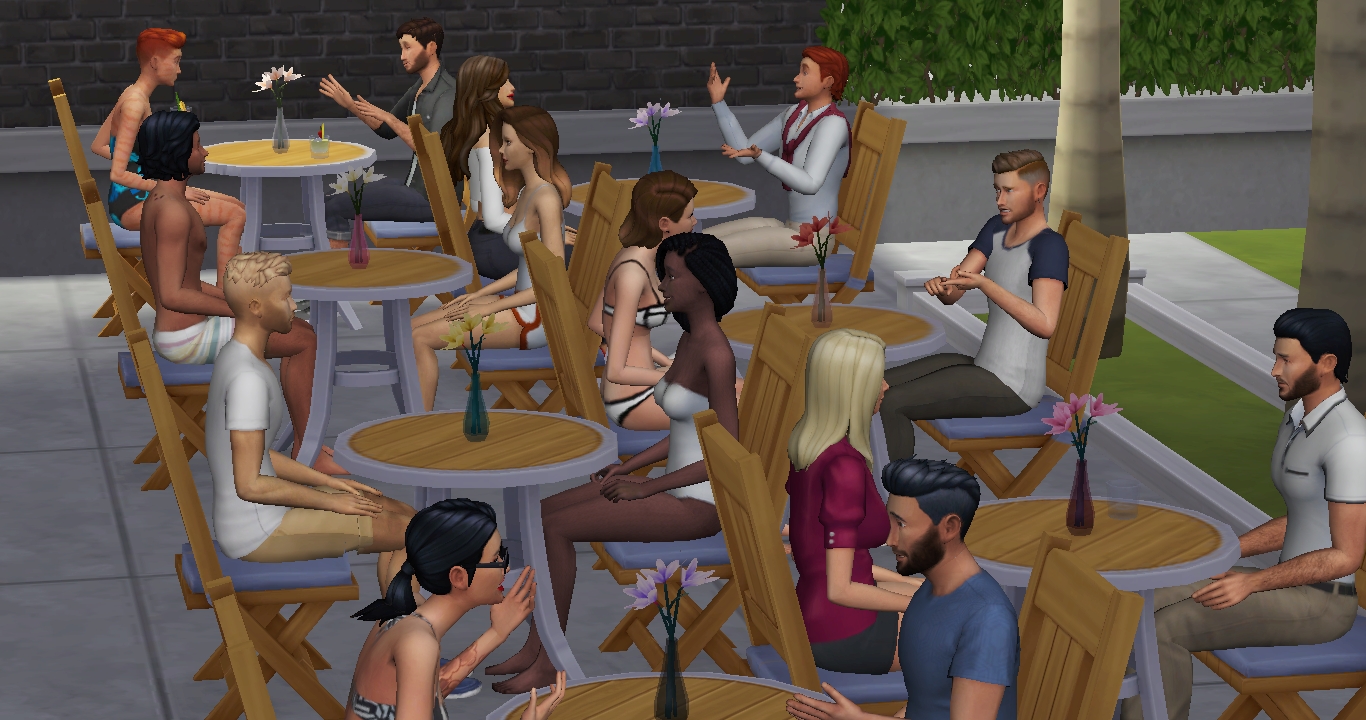 The challenge is soon underway, with the various pairs talking about themselves and trying to make an impression in just five minutes. When the bell rings, they all move clockwise to find a new partner. The cocktails are flowing and so is the conversation… 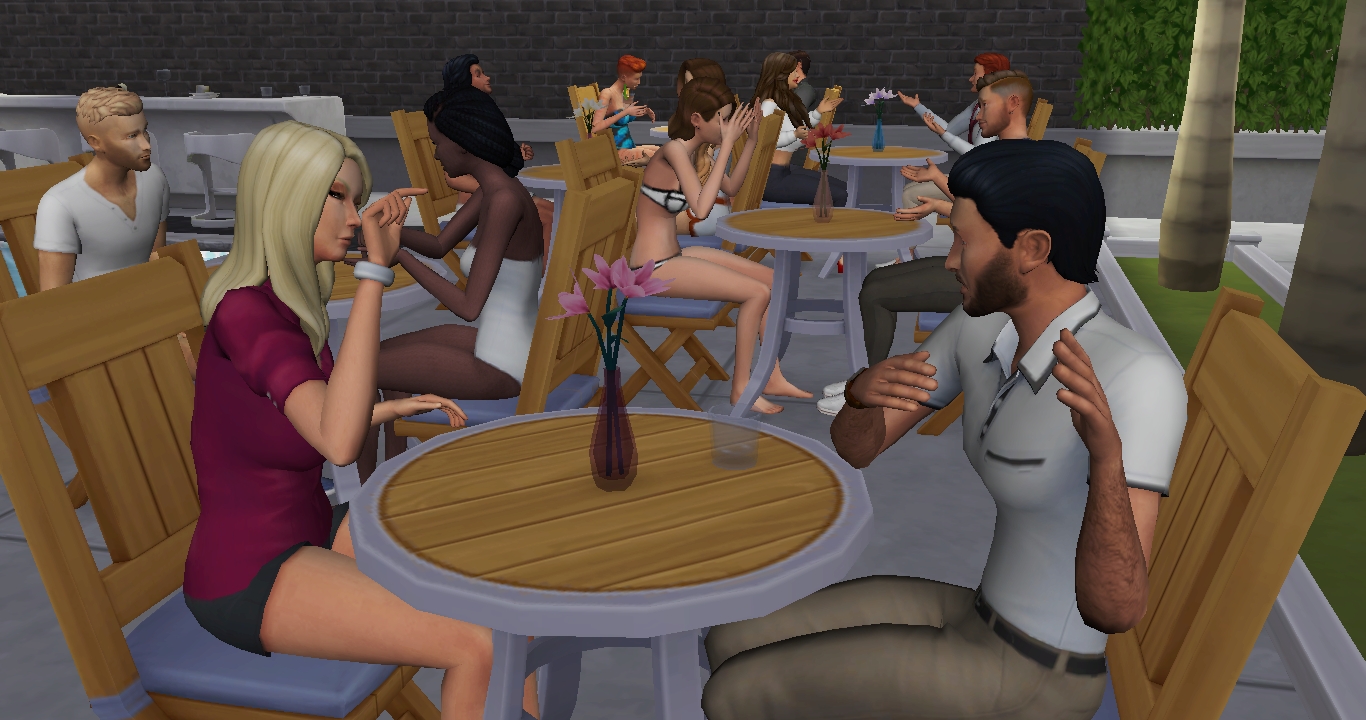 Kyungri: I know you slept with her! Aren’t you ashamed? You have a wife and two kids, how are you not going to uphold their honor? Bring home the money?

Gabriel: At least I can find a spouse AND lovers. Where are yours? Hidden in your plastic tits? 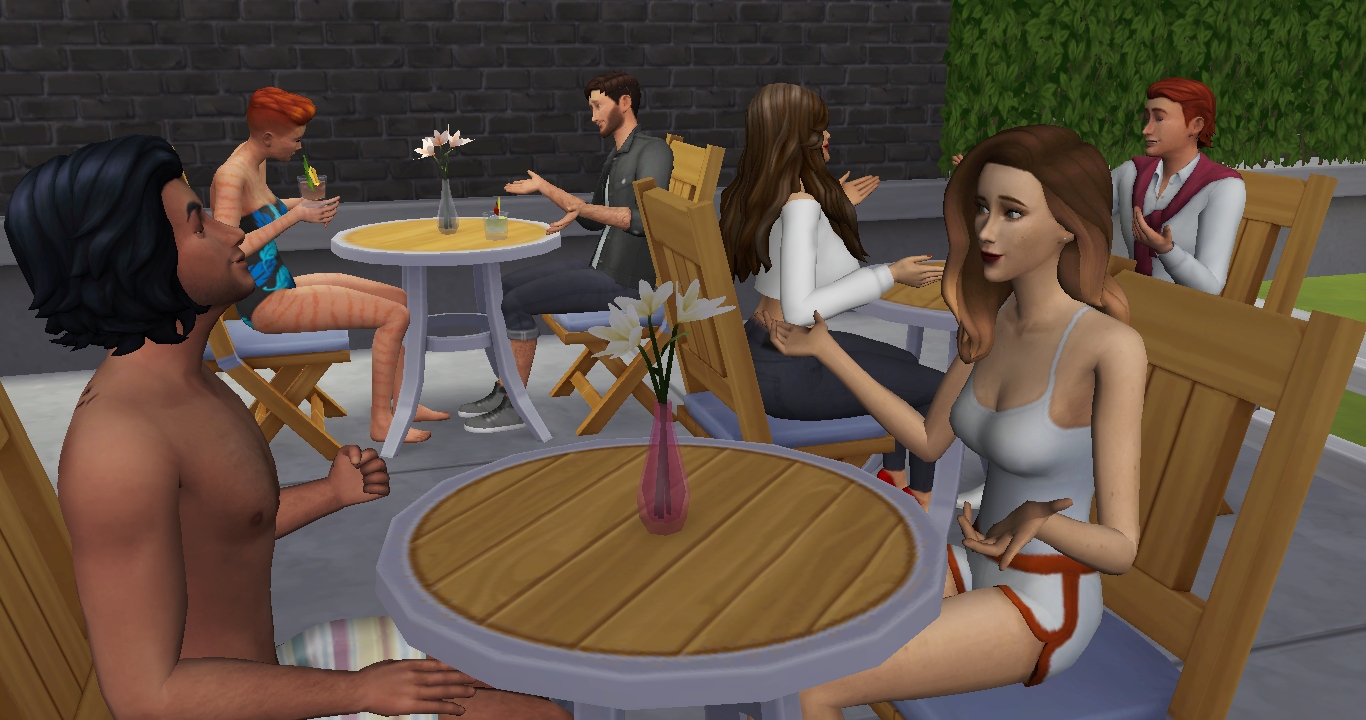 Marjan: And so I told him to just pack up the dog in my suitcase! Put some food and air holes in there and it’ll be like a palace! I wonder why he quit the next day…

Patricio: I see…………… *Is actually looking at her boobs the entire time*. 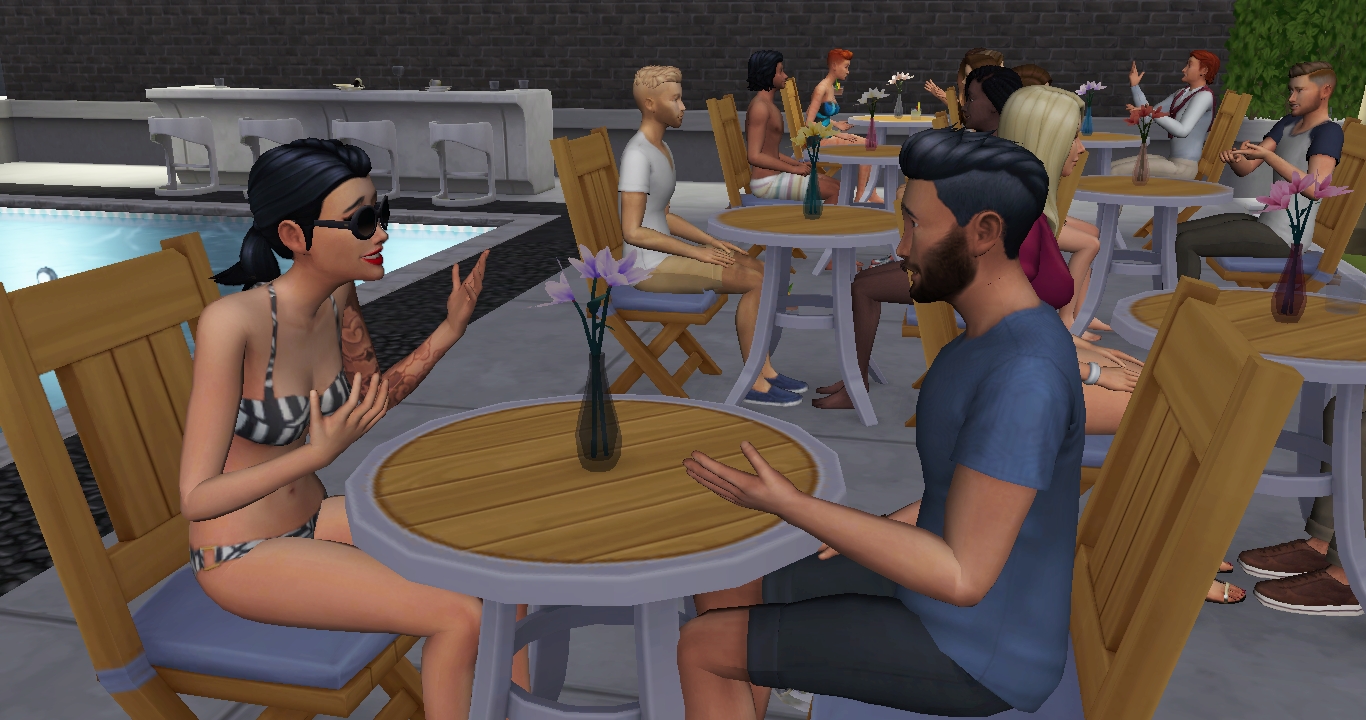 Mitchell: So when I was heavier I used to suck in my belly when I was on the scale and my mom told me I wouldn’t weigh any less that way… I told her that I did that because it was the only way I could see the numbers on the scale!~ 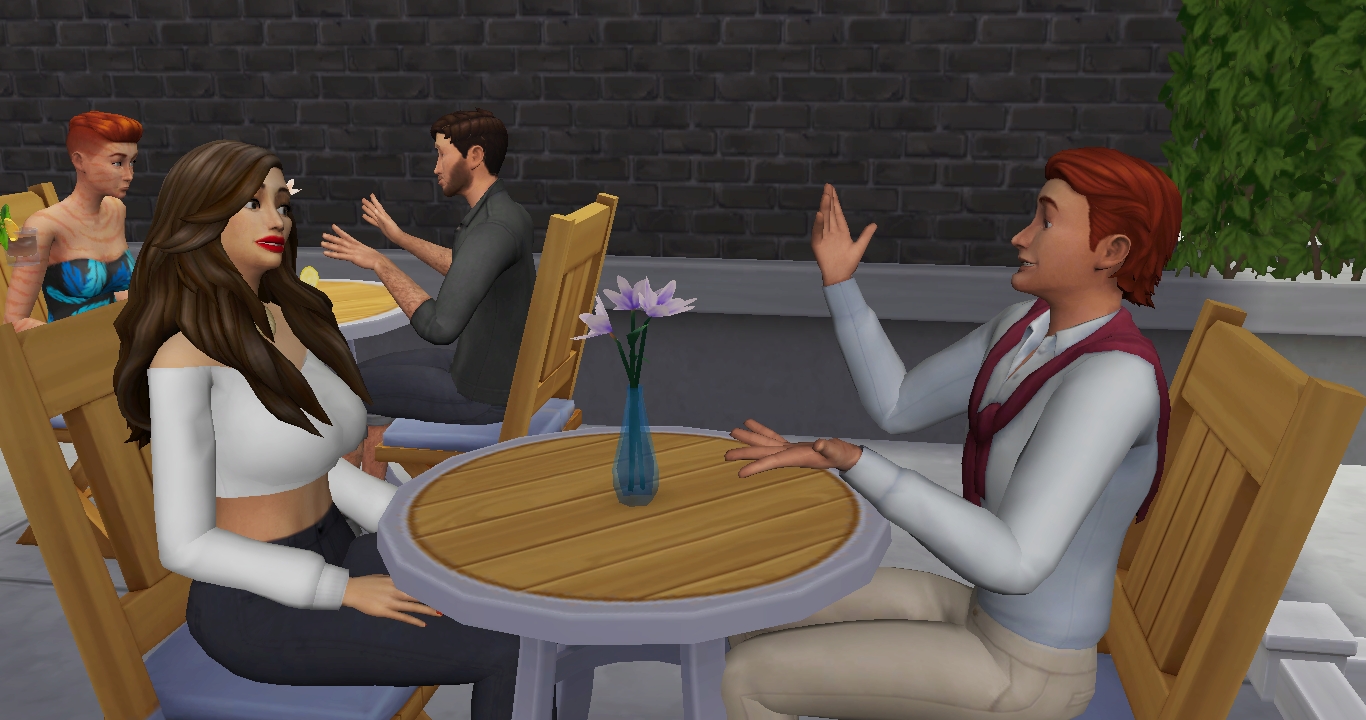 Todd: Enca, I love your music! You certainly have captured the hearts and souls of all of us who live for hot beats, fishnets and sheer nighties, and dancing in pools and hot tubs. We all live for you, queen! Slay us all!

Enca: Honey, that’s so sweet! I really appreciate that! 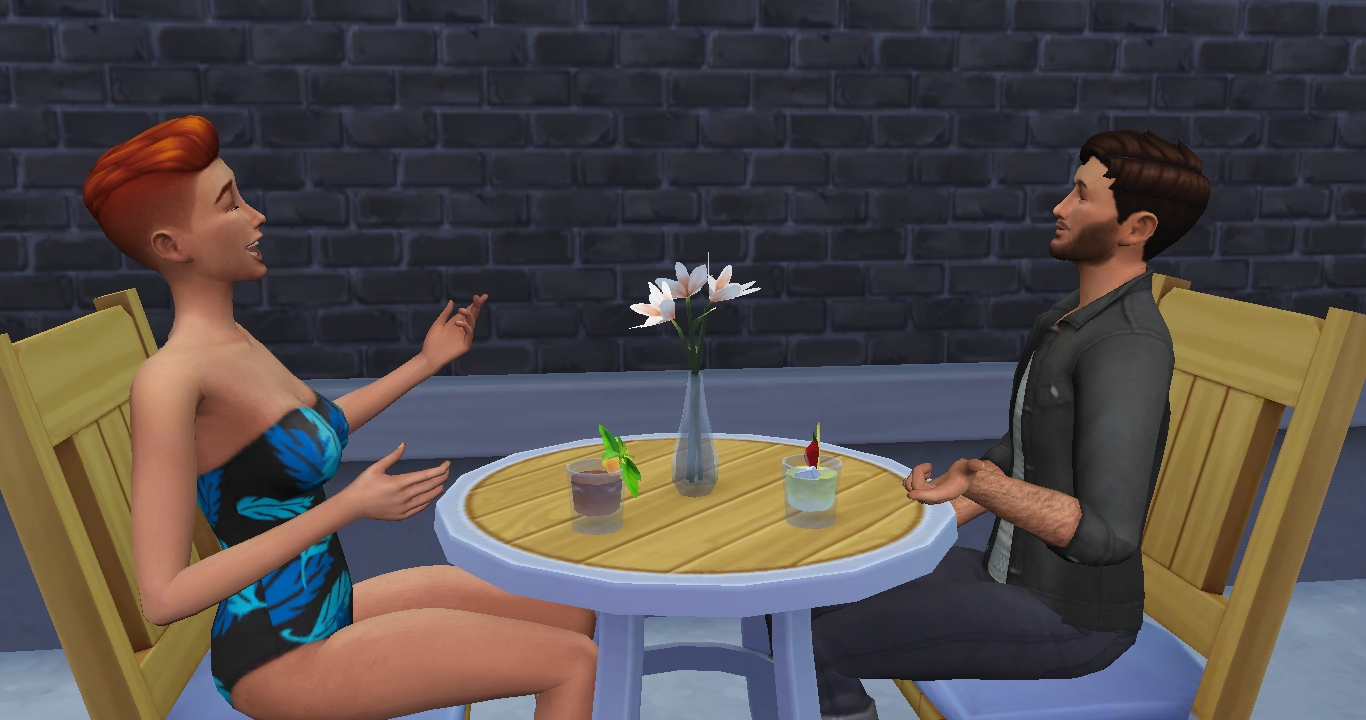 Louise: I’m taking a gap year from university and I’ve discovered so much about the world, there’s just so much to learn and to see out there! I’m humbled by the power of a landscape to remind us of how small we are.

Matthieu: Oh, I totally agree! We are but grains of sand on a long and beautiful beach, waiting to be molded by a pair of skillful hands. 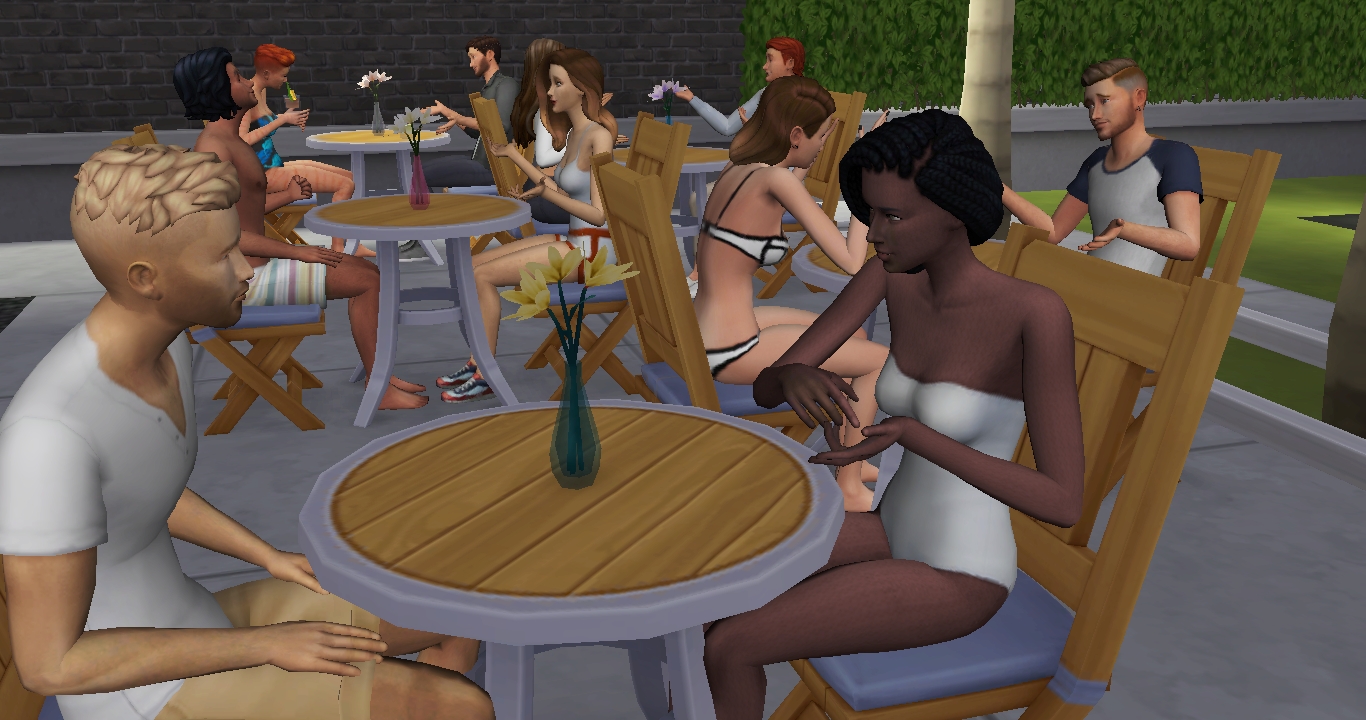 Enzo: So have you found someone in the house you’re attracted to?

China: Oh honey, I’ve already found someone and stamped them with my seal of approval. Let’s just say that we weren’t just discussing depositions in my room last night… 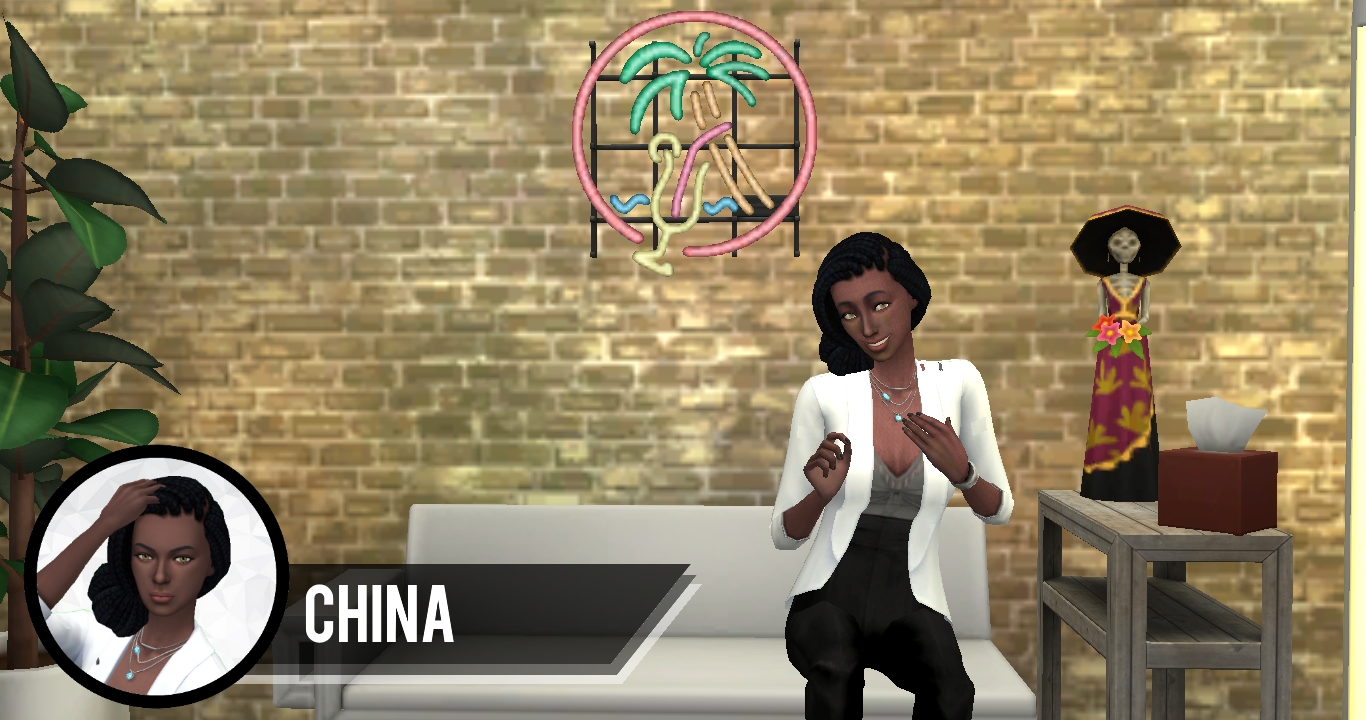 China: So, I know I shouldn’t be cocky, but let’s just say that a certain hunky coach and I may have spent a loooong night under the covers. I couldn’t help myself, and neither could he once he saw that I am much, much more than just a smart cookie… I’m also a moist cupcake, if you get my gist… 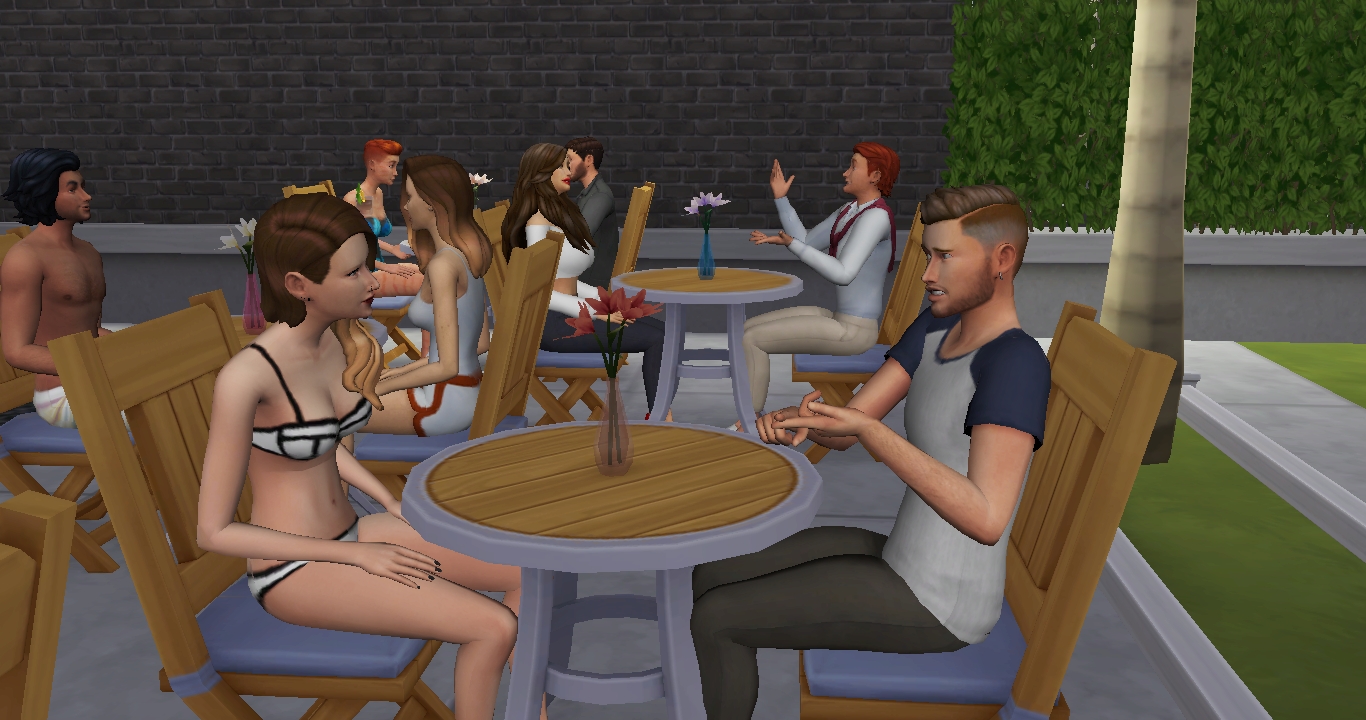 Harrison: I… er… I studied Social Anthropology in school and… er… was a part of the debate team and, er….

Charlee: You were on a debate team with these communication skills? Were you the only applicant that year or…?

After over two hours of this, the housemates are finally done, and they go off to vote for the most charming among them. Harrison isn’t happy with his performance in the challenge and goes off to the bathroom to let off some steam. He is upset that he let his nerves get the best of him and needs some time alone to think about why he’s failed. 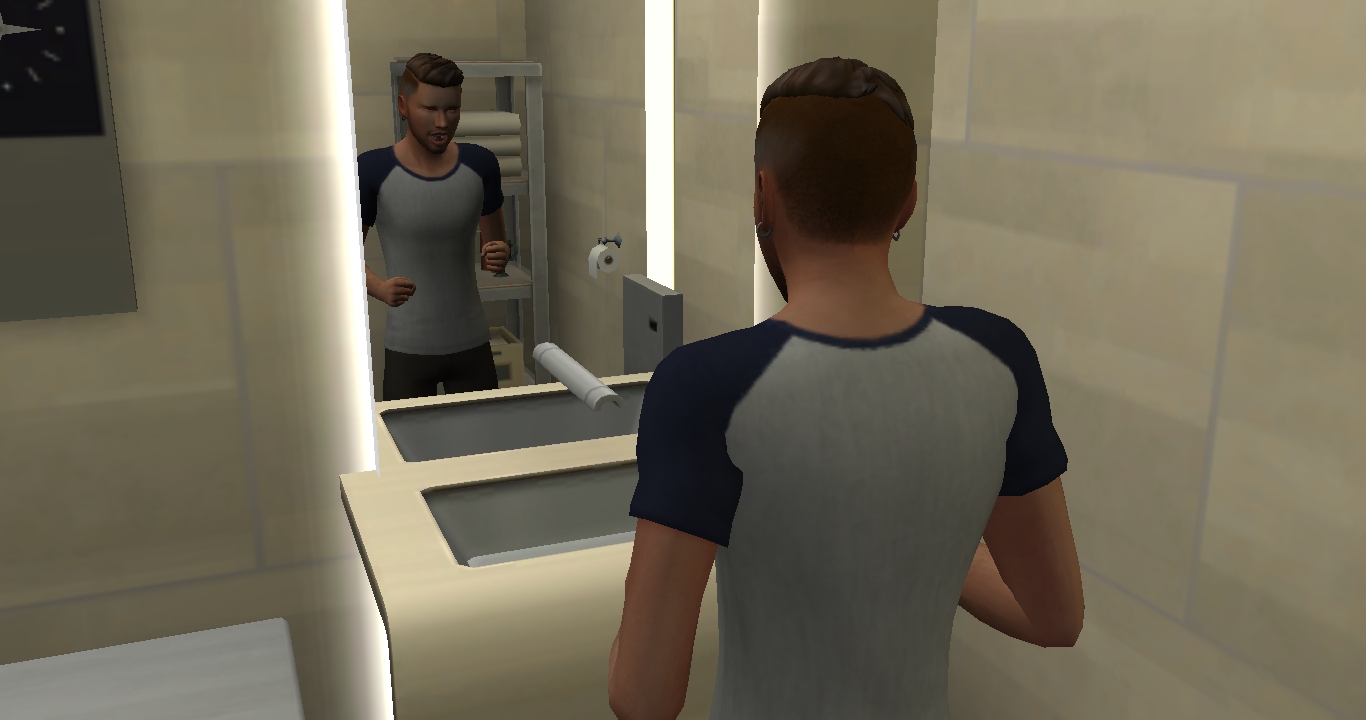 Later on that day, the housemates are all called out to the yard, where they wait anxiously to hear who has made the best impression on them because they know that whoever wins is going to get a huge boost in popularity that will surely attract more fans.

ajmkv: Housemates, you all did an admirable job at showing off your charm to each other… well, most of you did *Harrison gulps*. However, only one of you can win this challenge. You all voted to determine the winner of this challenge, and we have three people who were head and shoulders over the rest: Mitchell, Todd, and Matthieu!

Mitchell: Is this a mistake?

Matthieu: Hey, would you look at that?

ajmkv: Alas, there can only be one winner. And with a clear majority of the votes, the surprising winner of the challenge, showing buckets of charisma and warmth, is none other than… 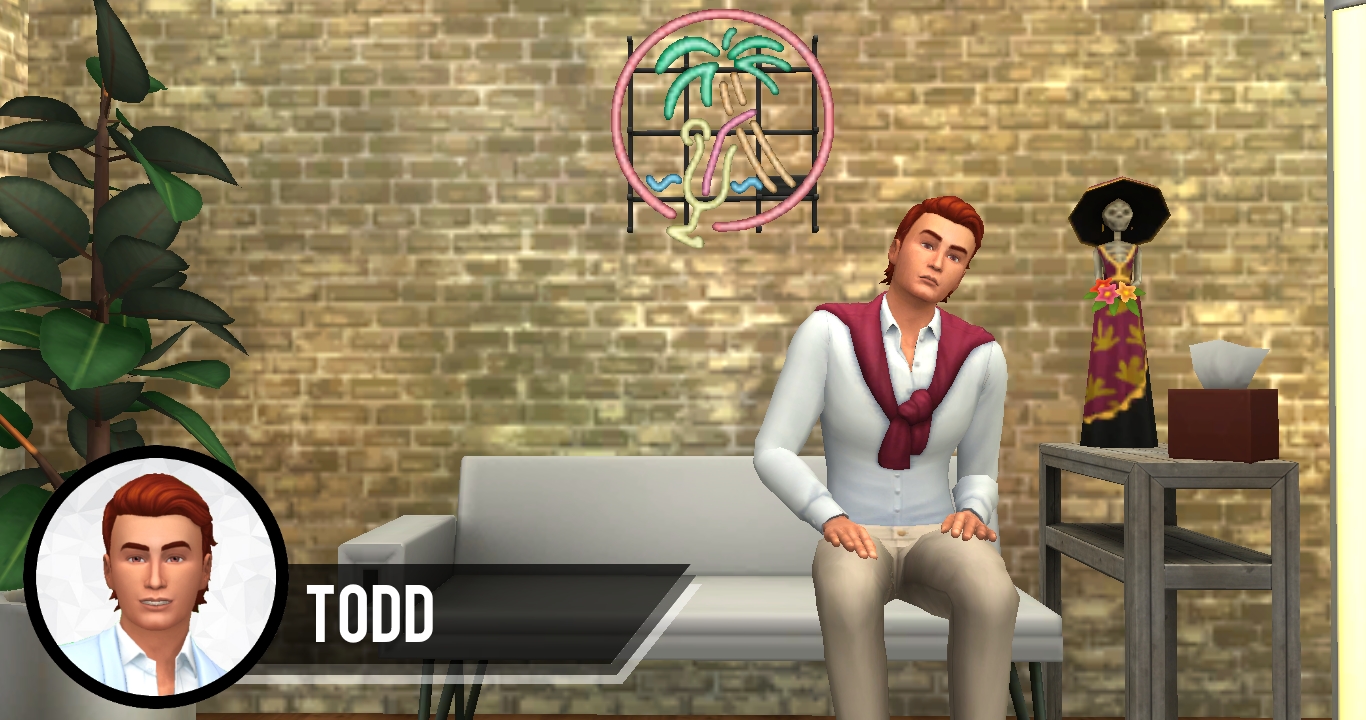 Todd: Ding ding ding! I mean, where you expecting anything less from me?

ajmkv: Congratulations, Todd! You have won immunity from this week’s elimination, and a 5000 simoleon shopping spree at Galeries LaSimyette! Kill them all with your charm, you sneaky devil.

Now, for the bad news… you all will be nominating the housemates you want to put up for elimination very soon. Make sure to take some time to think about it, because the people you send off to the chopping block will be at the mercy of our viewers and that won’t be pretty for some of them. Until then, sleep well and enjoy your time in the house… it might be the end of your time here!

7 thoughts on ““The Boys Who Go Stargazing” (Part II)”