Welcome to Kev & Get… More! Sometimes our dear contestants leave before we’ve had enough of them, so to get to know their stories a little bit more, this little spinoff will follow our beloved housemates during the breaks between episodes. I want to be able to publish content more often, and doing more frequent, shorter stories will definitely help! These will be lighter on the screenshots and will have a different style—definitely more narrative than TV script-y—and I’m excited to dive into these!

I’ll be kicking things off with our recently eliminated drama queen, Todd. Make sure to let me know what you think about this lil’ spinoff! I hope y’all like it.

Todd Morrow has never been a nervous person. He is an only child, doted upon by his parents, beloved by his teachers, and adored by his friends. He’s smart, handsome, and charming. He always gets what he wants: silly things, serious things, boys, and everything else he desires. So, no, he has never had a reason to be a nervous person. Why? One snap of his fingers, a sly wink, and a couple smiles here and there are his tools, and nerves simply don’t fit into the equation.

So why is he nervous to go home?

As he stares up at the gleaming skyscraper he now lives in with his boyfriend, he remembers the moment they came together, not too long ago. From the get-go, they were quite the pair, these two: Todd, a starstruck fan with a plan, and Hudson, a soon-to-be reality TV show superstar. Before this chance encounter, Todd knew that his superficial pleasures went beyond the little flat he had in the city, filled with late boozy nights and one too many boys. He wanted more, but his expensive taste required more funds. His parents were generous and loving, but they weren’t rolling in dough, and Todd wasn’t quite ready to grow up and get a job, so he knew he had to find someone who would… soften the blow of unemployment, to put it nicely. 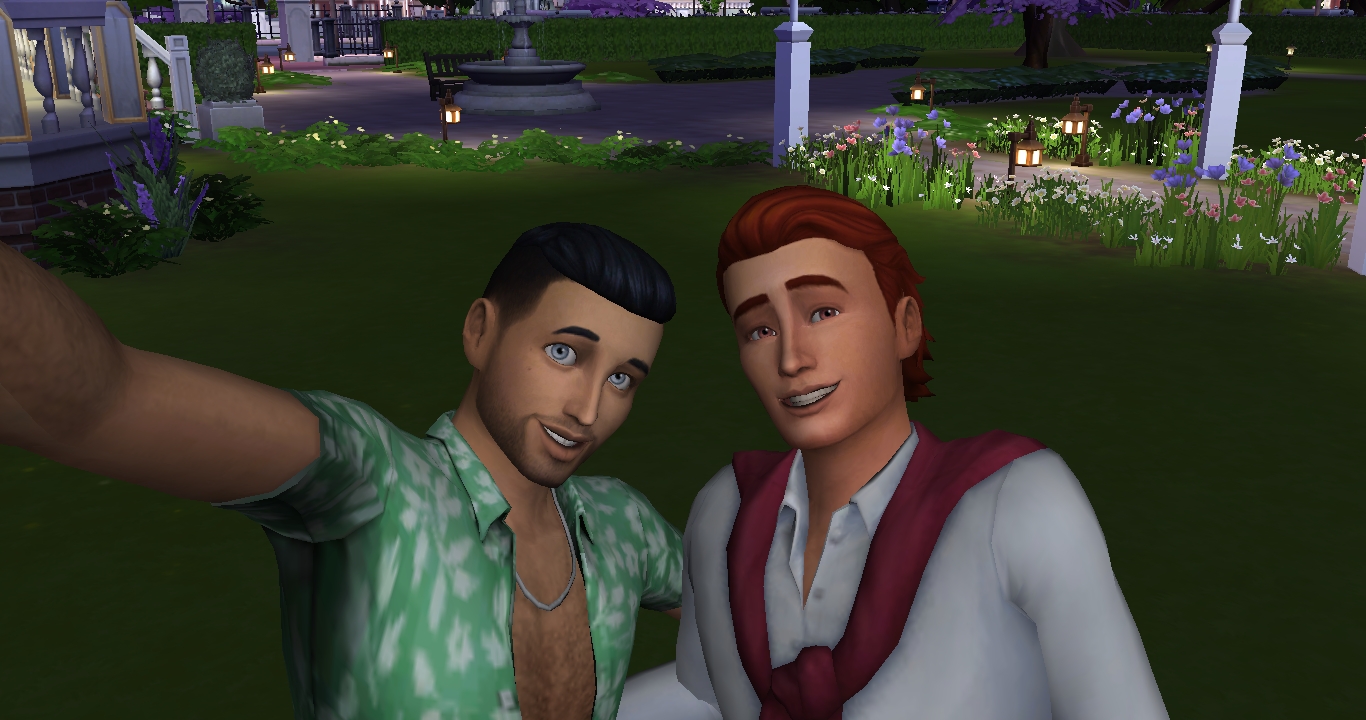 He had watched him for weeks on that show, and fell in love with him just as everyone else did. He had to meet him; he just had to. As fate would have it, his request to attend to the live taping of the final challenge of the first season of Kev & Get It was granted, and he soon found himself close to this man that he had watched for months. He was transfixed, and eventually he found himself getting close to ask for a picture and an autograph. And he got them… and, as it turned out, much more.

This was many months ago. Before the win, and the fancy apartment, and the money. Now, lost in his thoughts, he presses the elevator button to zoom up to one of the top floors, where he knows that Hudson is waiting for him. His stomach is in knots. Take it easy, Todd, he thinks, there’s no reason to be so nervous. The ding of the elevator arriving at his floor, though, only makes him more antsy.

And suddenly… there he is. 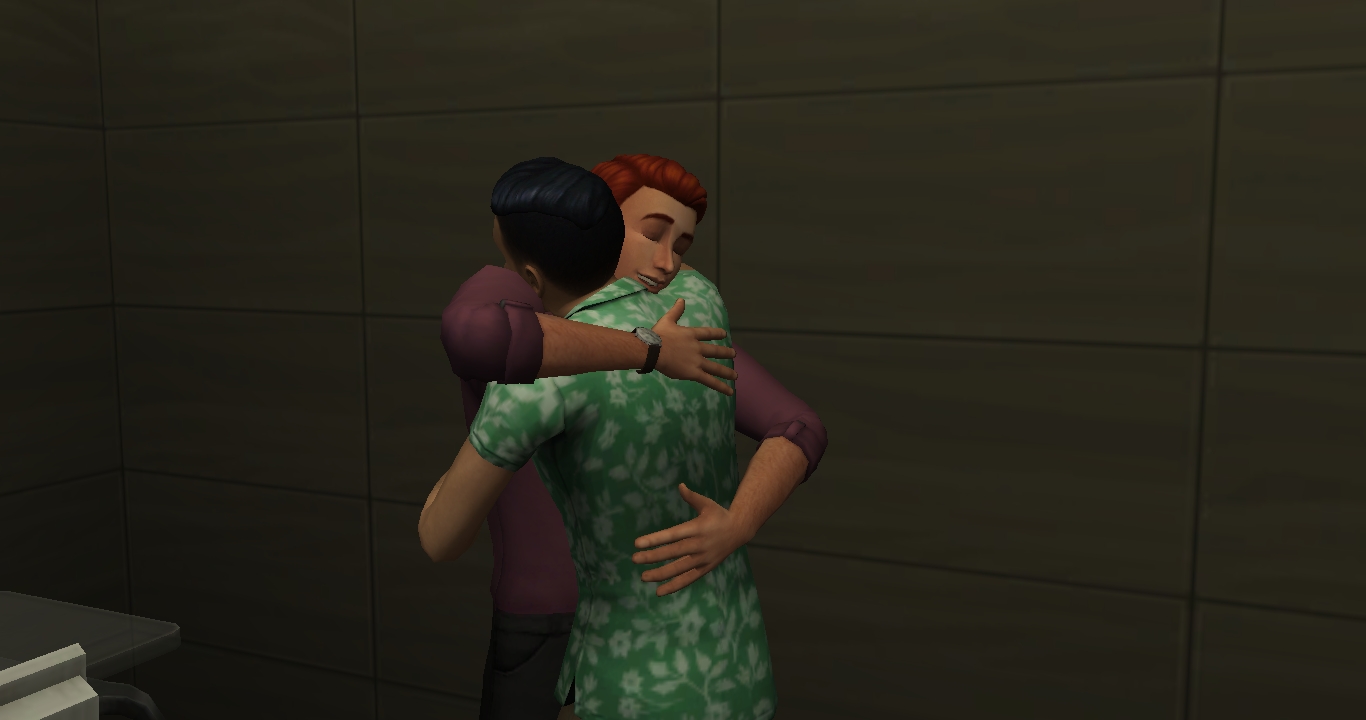 “Todd! You’re early!” Hudson seems surprised to see his boyfriend stepping into the apartment. He quickly pulls him into a hug, appreciating the feel of the soft fabric of the man’s shirt and the sweet aroma of his perfume. He always smelled so good.

“So, did you miss me?” Todd asks with a chuckle, his lips close to Hudson’s ear.

“This house is too big without your huge ego in here, y’know,” Hudson teases with a glint in his eye, a laugh escaping from his mouth.

Todd sighs. This feels good, he thinks, it feels right. His thoughts, which had been racing before, calm down as he sinks into the embrace. He feels dumb for having thought that this kind man would judge him for his actions. This is Hudson, after all; he is the sweetest and most genuine person Todd has ever met. He couldn’t be mean if he tried.

But Todd could, and he felt self-conscious. He showed his ugly side to the world and now he is worried that this beautiful and loving man didn’t like what he saw. Shit, he frets, I must have looked like such a fool. 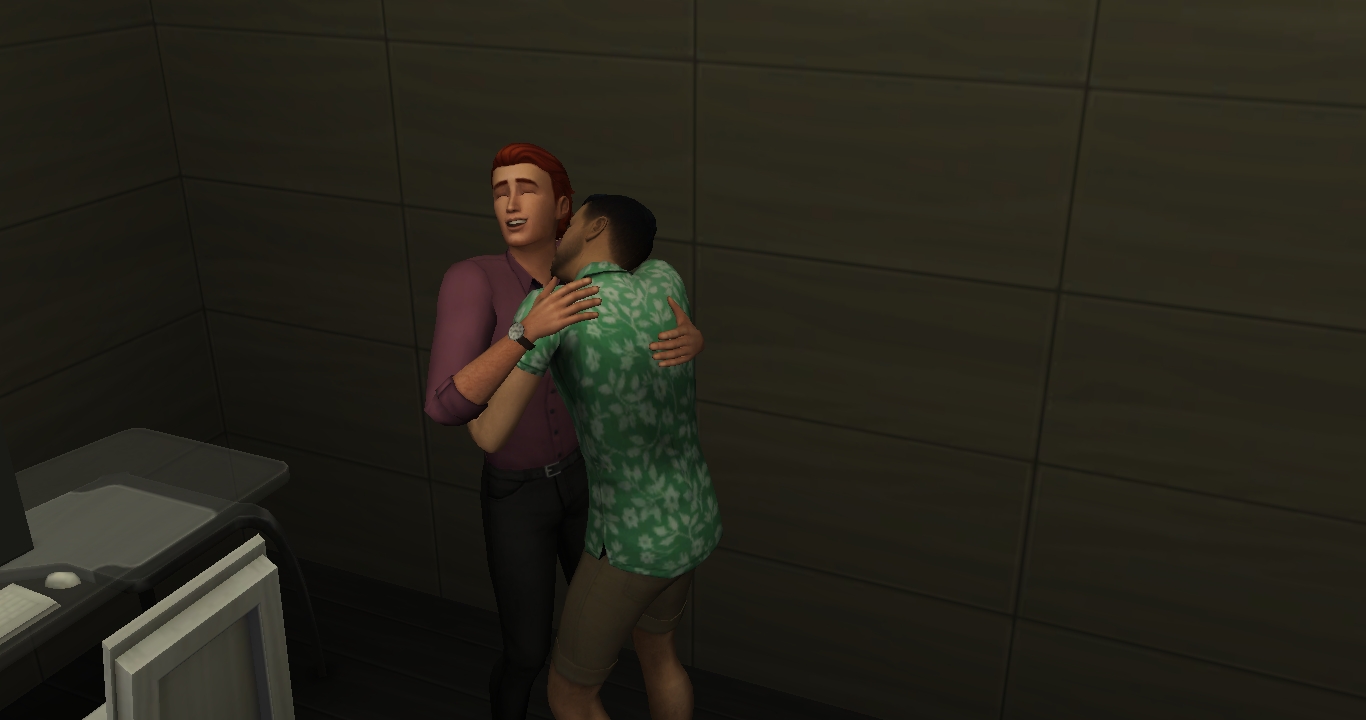 “Ouch! Watch it!” Todd laughs as Hudson nibbles at his neck.

“Or what?” Hudson asks with a playful pout, “can’t I be excited to see my boyfriend?”

Todd rolls his eyes. “It’s been five weeks since we last saw each other,” he says, “it hasn’t been that long.”

“Five hours is too long without you. Five weeks was torture.”

Hudson leads Todd into the bedroom, and they both sit down, their backs to the enormous windows overlooking the city. Todd knows that he must ask, because he feels like his stomach is in his throat. He has to know. “Hudson, I—” 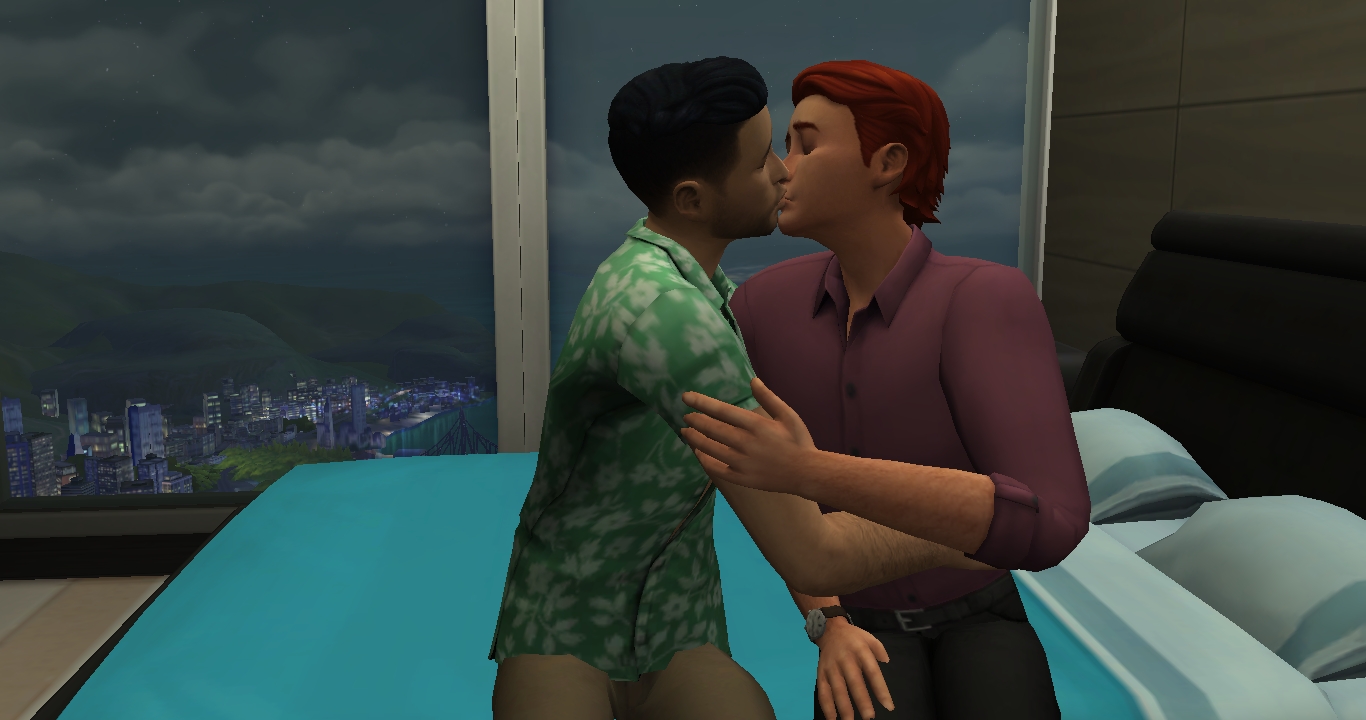 He doesn’t finish what he wanted to say. Every thought is yanked from his head as he loses himself in the kiss. Tender at first, and then hungry, it lasts a long time. Neither of them want to end it, and each passing second increases the intensity of the physical contact.

Hudson can feel the anxiety emanating from the man in his arms. Todd isn’t one to act shy, especially not in front of him. It was his refreshing straightforward attitude that had brought the two together, after all, and Hudson doesn’t like feeling like there’s something going unsaid. He hopes that the kiss is enough to calm the tension he can feel flowing in the room.

It does way more than that, though. Soon, words aren’t necessary, and neither are clothes. It has been a long time, after all. 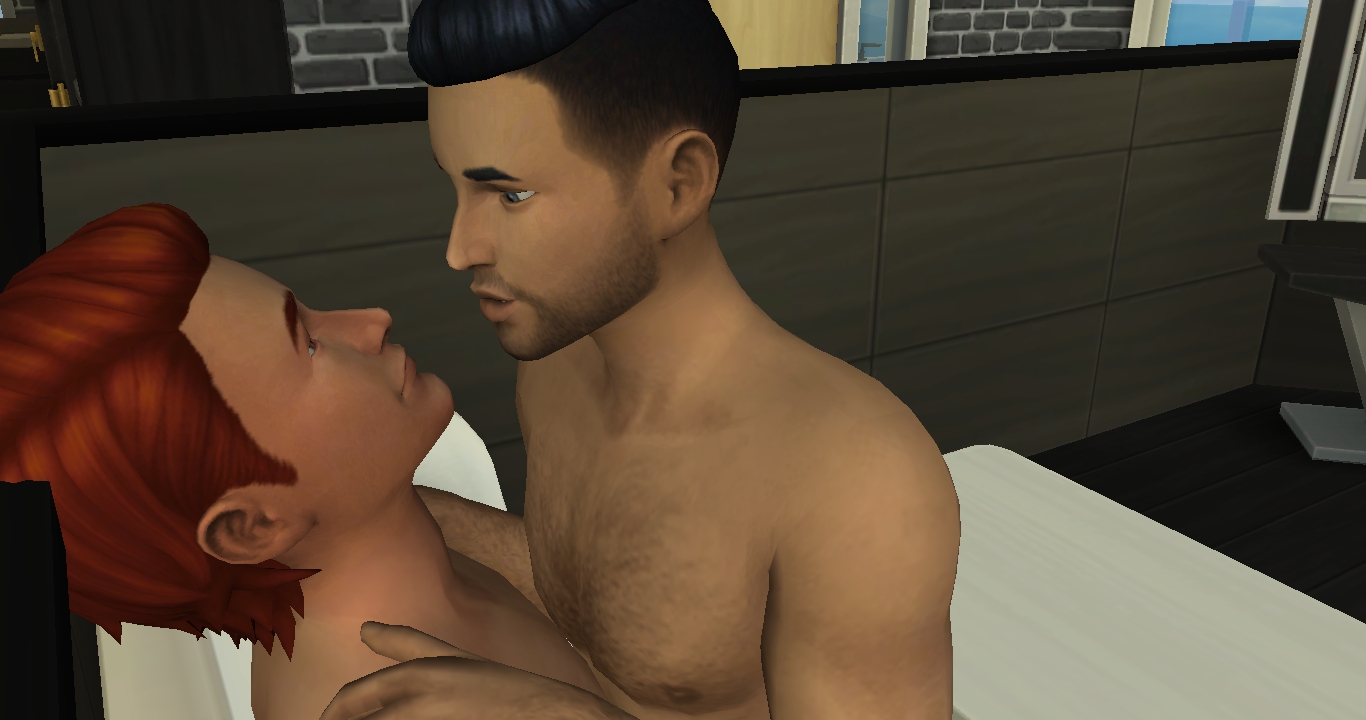 “You looked so good on TV, you know.”

“Oh, I know. Did you expect anything else?”

“You in those little swim trunks, though… I was hard every time.”

“Me naked underneath you?”

It wasn’t late when Todd arrived at the apartment, but the night is well advanced when the pair finally collapses, exhausted and satiated, next to each other. Cuddling is one of Todd’s favorite things, especially when it’s with Hudson. He just loves the feeling of being taken care of by someone. Before, on nights like this one, they could spend hours just cuddling in front of the fireplace, holding glasses of wine and talking for hours. They loved talking to each other, and they always took the time to do it.

There were also fights. Todd’s dry sense of humor wasn’t the easiest to live with sometimes, especially when he couldn’t, or wouldn’t, draw the line between teasing and offending. More than once, Hudson had been hurt by a barbed comment, thrown out there carelessly. Regardless, he never yelled or even raised his voice, he simply mentioned that he was hurt, and this infuriated Todd. “Why can’t you let me just have fun?” he would say, sighing in exasperation, “it’s never that serious!” He would never say he was sorry.

Now, though, Todd realizes that he’s not as funny as he would like to think. He can’t stop thinking about how he became a petty person once he was faced with a lofty objective. This TV show was meant to be fun, but instead he has made it into something shameful. He acted with cruelty and thoughtlessness on the show, and finally he can see that, yes, it is that serious.

“D’you want to go out to that place for dinner?”

“Yes, but only for one drink. I know your pumpkin carriage is waiting, princess.” 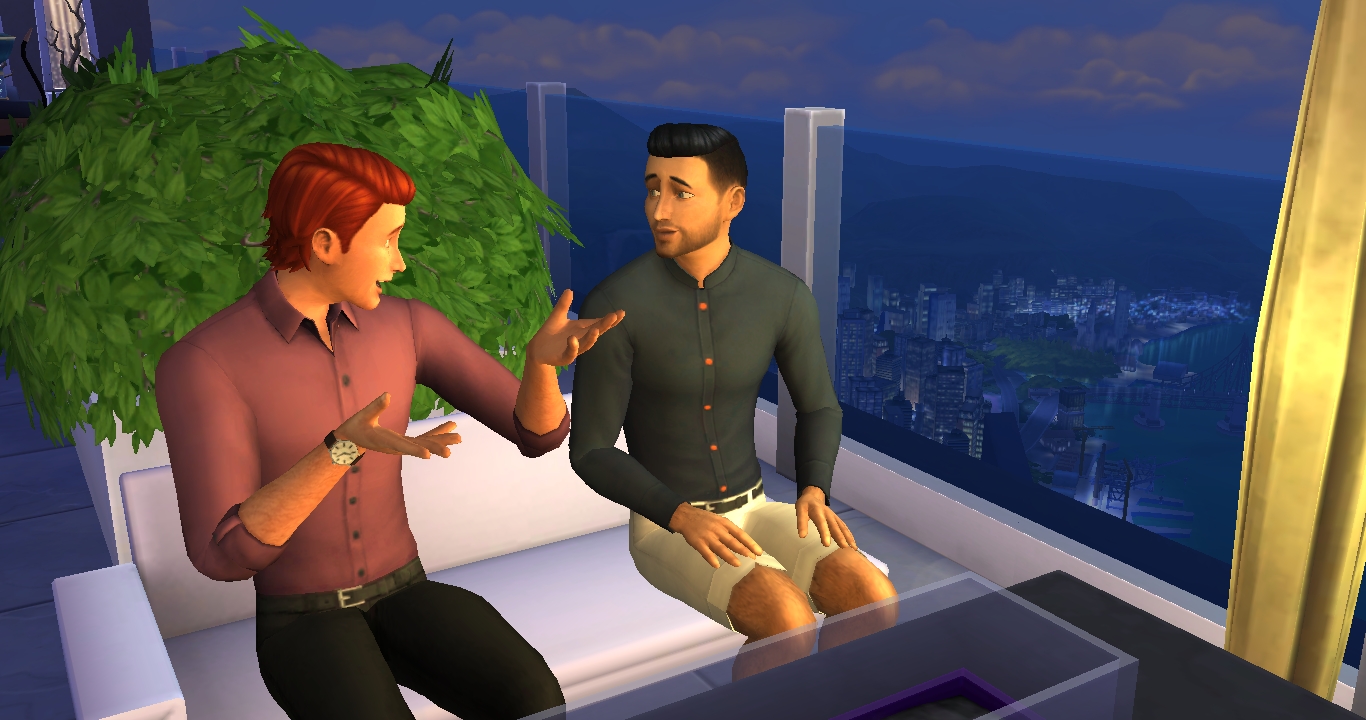 After dinner and definitely more than one drink, Todd knows that he must address the situation. He’s unsure of how to approach it; he doesn’t like pointing out his flaws because he’d rather pretend he doesn’t have any. This experience, though, has made them glaringly obvious.

“Hudson…” Todd begins, “I need to talk to you about something.”

“Are you all right, mi cielo?” Hudson asks. He looks concerned.

“I did and said a lot of stupid things. I called myself a bitch and I sure acted like it.”

Hudson laughs. “Yes, you did, but I know how it is on that show, you have to stand out. You sure did.” 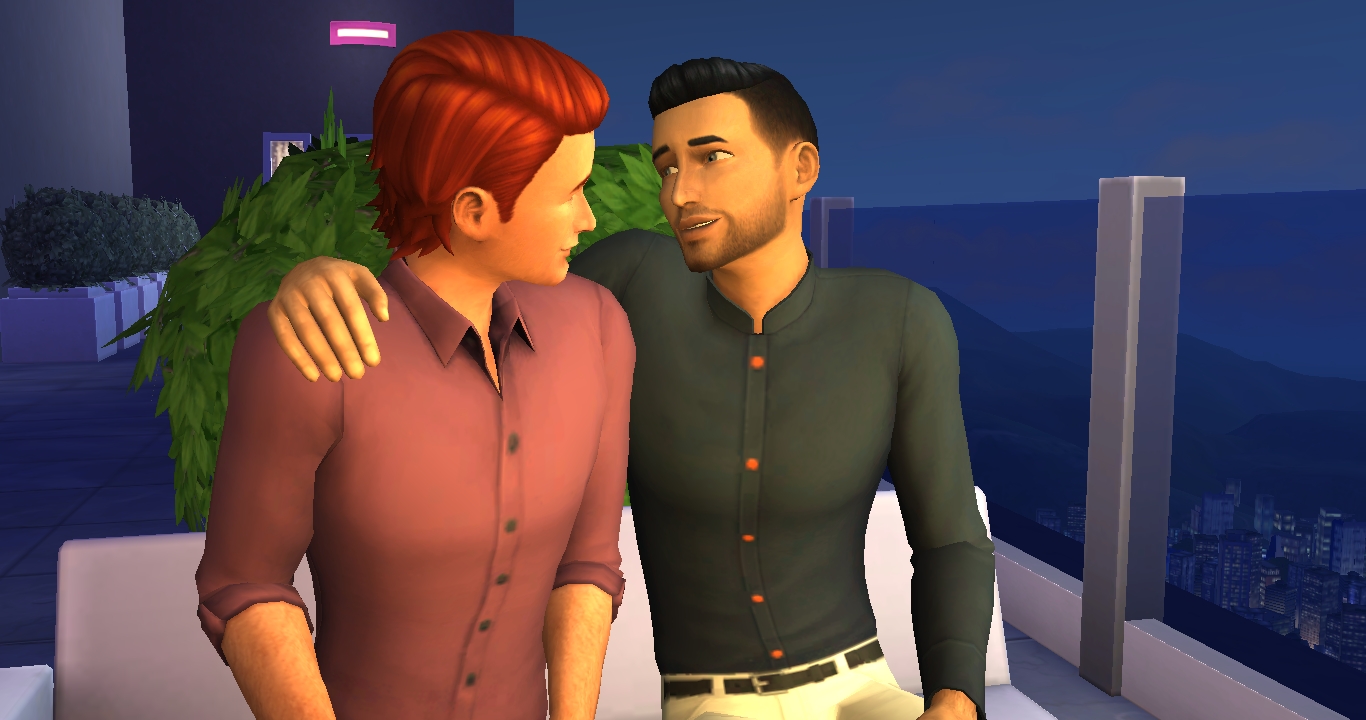 Hudson sighs and puts his arm around the nervous man. “I couldn’t hate you, Todd. Not even if I tried.”

“So you heard what I said when I was asked if I was dating you because I’m a golddigger? You heard me say yes?”

Hudson looks taken aback. “Are you?”

“I am. Or, was,” Todd says quickly. He hesitates, and then looks into Hudson’s eyes. “I didn’t think that I would ever fall in love, so I always wanted other things, fancy things.”

“And do you still want that?”

“Well, I don’t think I could live without this feeling…” He stops, and lays his head on Hudson’s shoulder. “I’m rude, I say hurtful things… I act like a fool because I think… thought… that that’s fun.”

Hudson doesn’t say anything. He sits there, looking hurt, listening to the confession. The night breeze ripples through his hair.

“When I met you, I wanted to become famous. I wanted to have people see me with you and think, wow, what a guy,” Todd says slowly. “It became so much more than that.”

“I regret all of it. I don’t want you to think that I’m with you because you give me things. Well, yes. You give me good things, like your attention, your affection, all of that. That’s so much better than all the other things I wanted.” Todd is now rambling, nervous and worried that he’s said too much. “I take all of it back, all of the rude things I said without thinking, all of the mean comments. I don’t want to be that person anymore, I just wanted attention. I  just want your attention, your love, you. I don’t need anything else.”

Hudson stands up and walks to the edge of the terrace, and stands there, looking at the city displayed underneath. Todd watches him for a while, thinking he’s ruined things. I knew I should have kept my fat mouth shut, I’m such a stupid fool! He thinks this as he walks over to the railing separating him from the dazzling lights of the world underneath. He comes close to Hudson, and hugs him. He’s nervous about what he’s going to say, but he knows he needs to say these things. He wants to say them, for the first time.

“I’m sorry, Hudson,” he says shakily. He hesitates before saying his next words. “I love you.”

Hudson’s eyes focus on Todd’s. It seems like he’s not going to say anything, for a long time. He just stands there while Todd feels like he never has before in his life: vulnerable, naked, exposed, nervous. 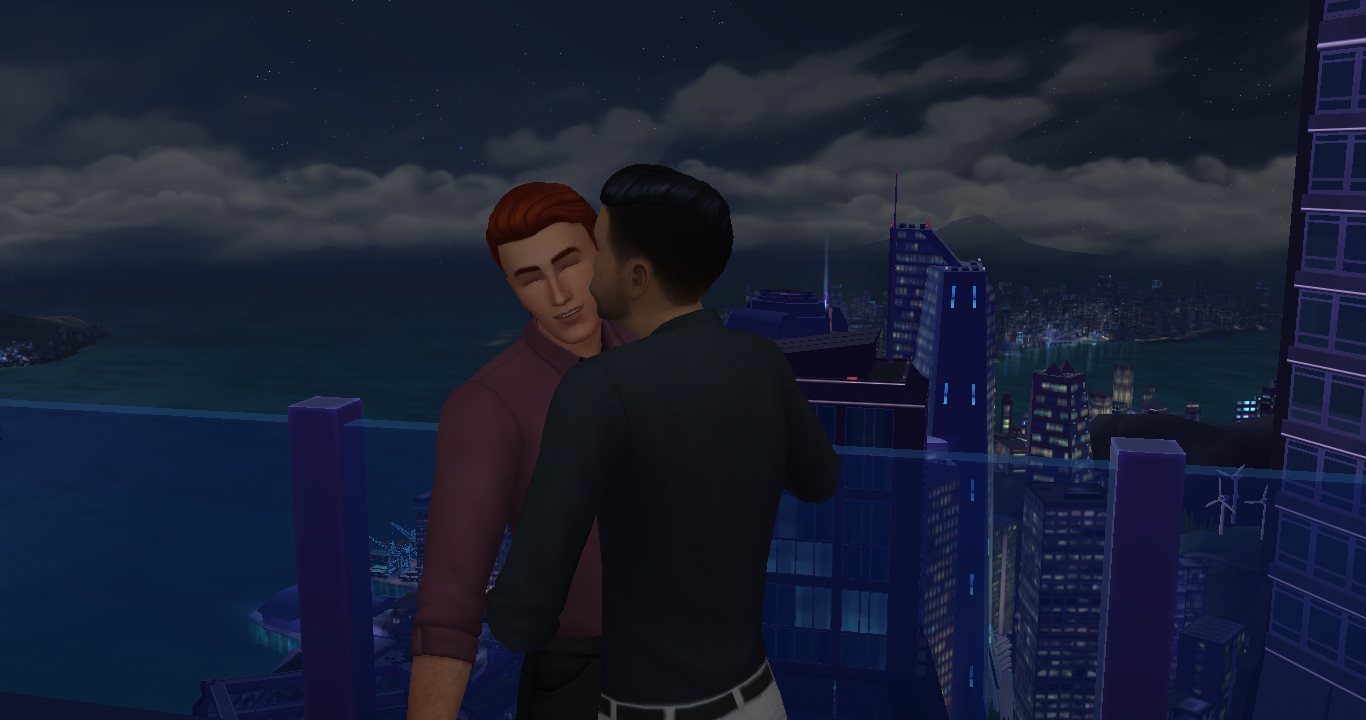