It’s been a long week, and the contestants take advantage of the down time before they’re called back to find out who the voters have chosen to send home. Everyone is tired, but they make themselves busy, cleaning the house or just hanging out with each other. Feeling a little sheepish after she was exposed to her housemates, Jessie immediately takes it upon herself to do most of the heavy cleaning, but quickly regrets it. 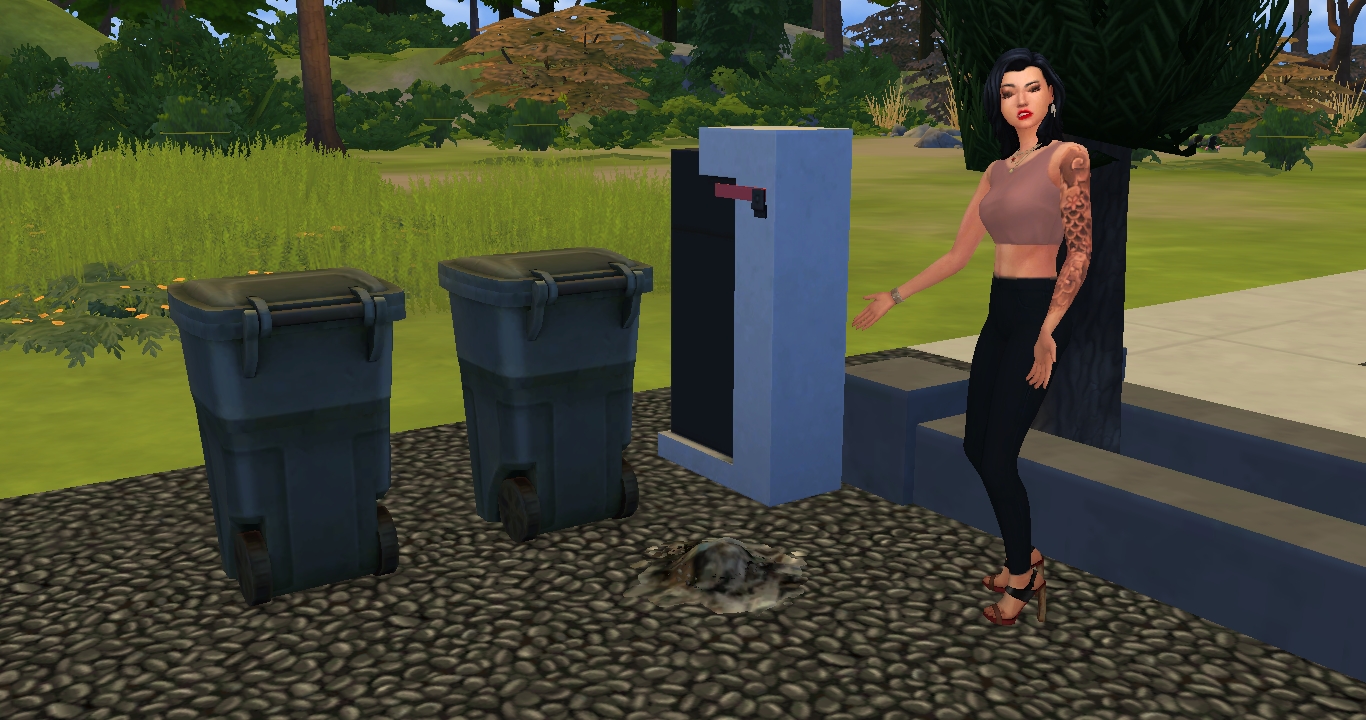 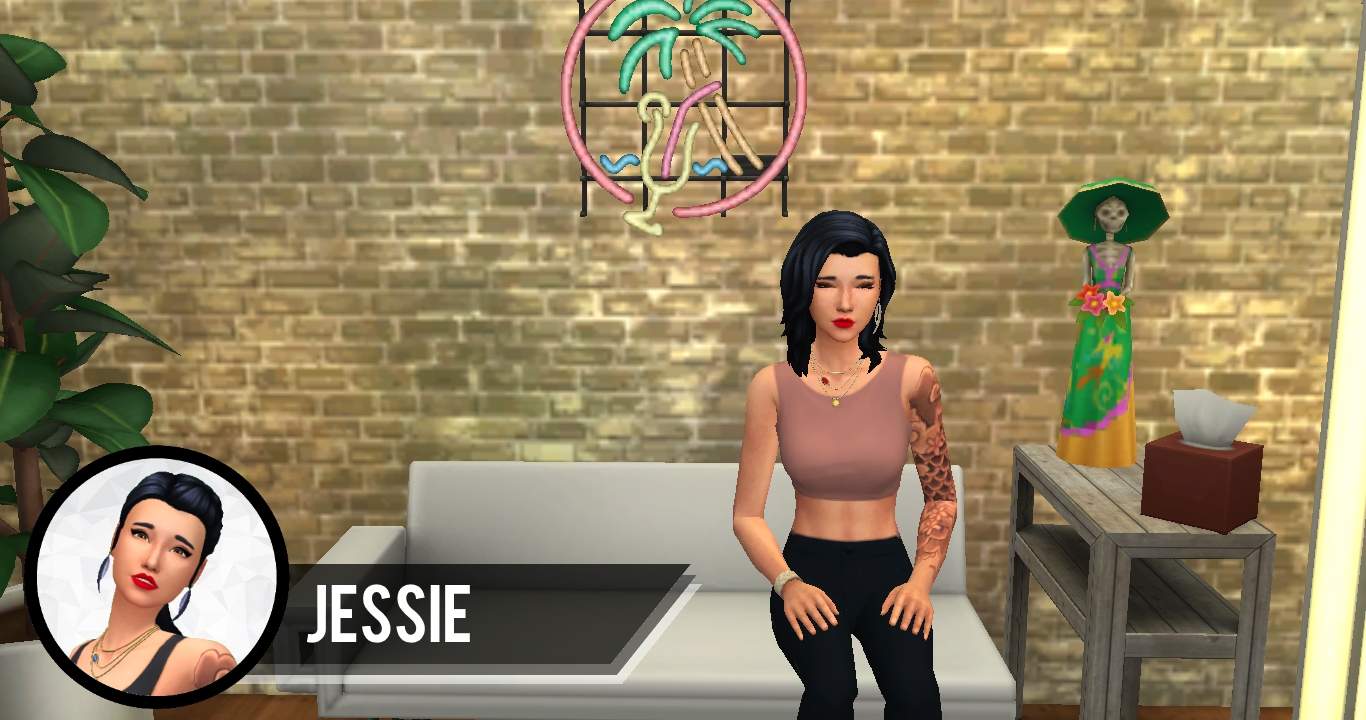 Jessie: I don’t mind cleaning, but gosh. I feel like these people could do a little bit more, you know? But hey, I did create some drama this week, so I guess I can make myself useful… and scarce.

Elsewhere, Enzo is feeling the impact of the week’s challenge. He didn’t like what Jessie did, and he feels like he’s been blindsided with the events of the week. He doesn’t like unexpected events, and seeing his ex-wife has stirred up uncomfortable feelings of inadequacy in him. He doesn’t know who to talk to, so he just goes off and spends some time alone, thinking about his life. He misses his family… 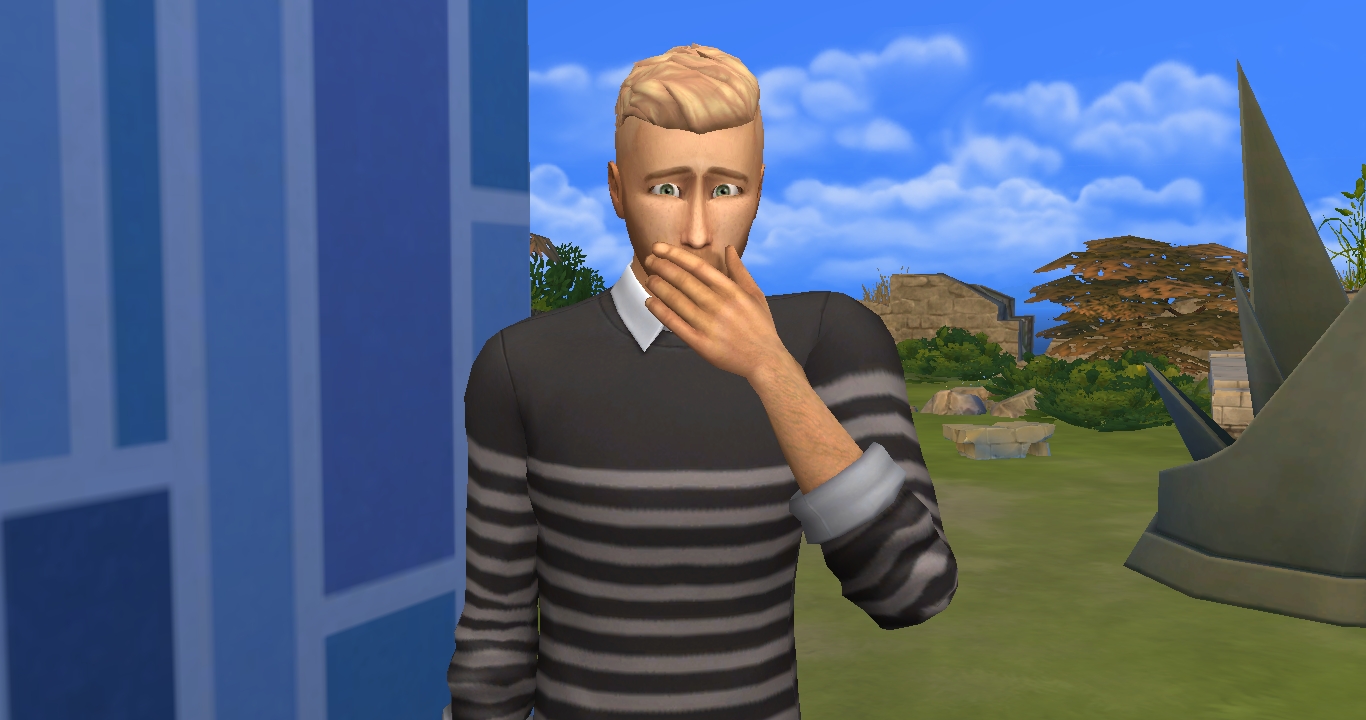 Charlee, meanwhile, is upset that she’s up for elimination once again. She feels like she can’t really talk to many of the people in the house, though, since she’s burned many of her bridges. The one person that she feels an ounce of respect for is Louise, and she seeks her out. She needs someone to hear her out, and Louise reluctantly agrees. 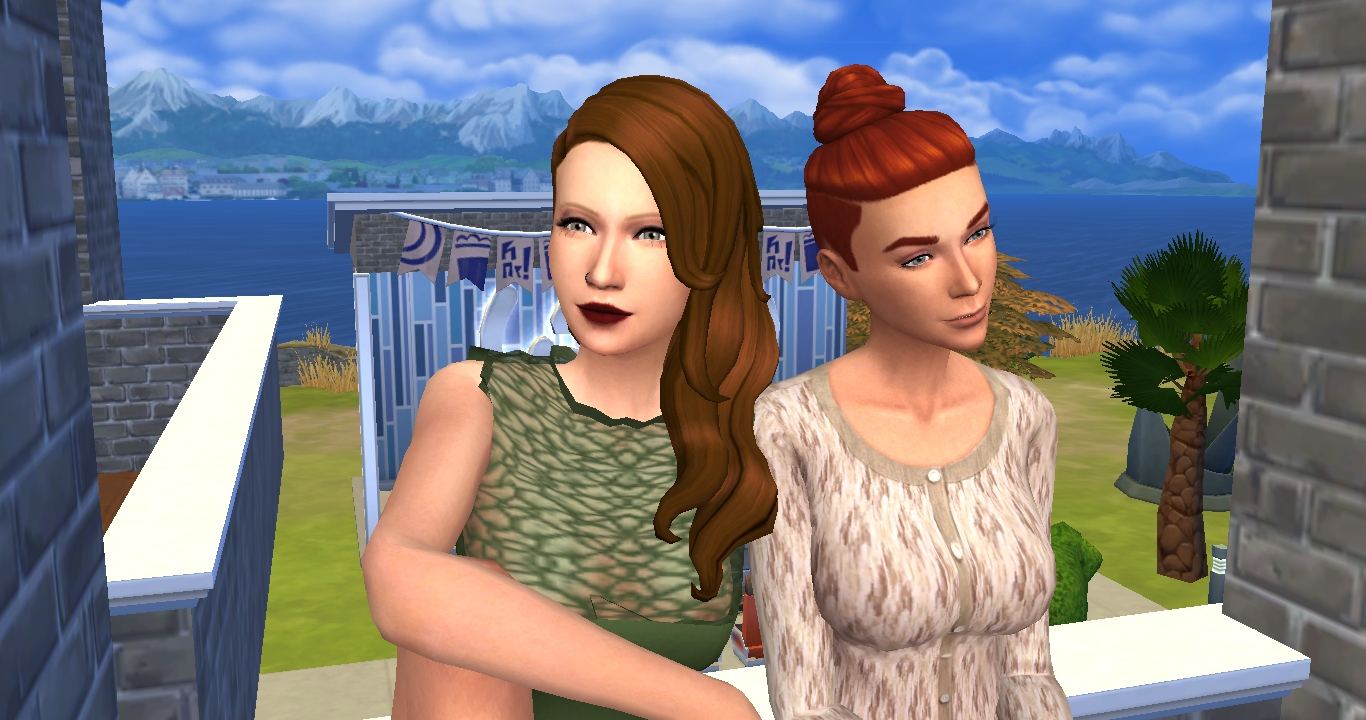 Charlee: I don’t know, I just feel like everyone’s out to get me.

Louise: Well, you have been kind of indiscriminately mean to everyone. I don’t think that’s been the best strategy.

Charlee: So how do you do it? Literally everyone here likes you, you’ve been nominated like once in the entire time you’ve been here! You could easily win!

Louise: I’m just myself! I don’t do things to sabotage others, I just do things for myself. You could try doing that sometime, maybe you’d make a friend or two. 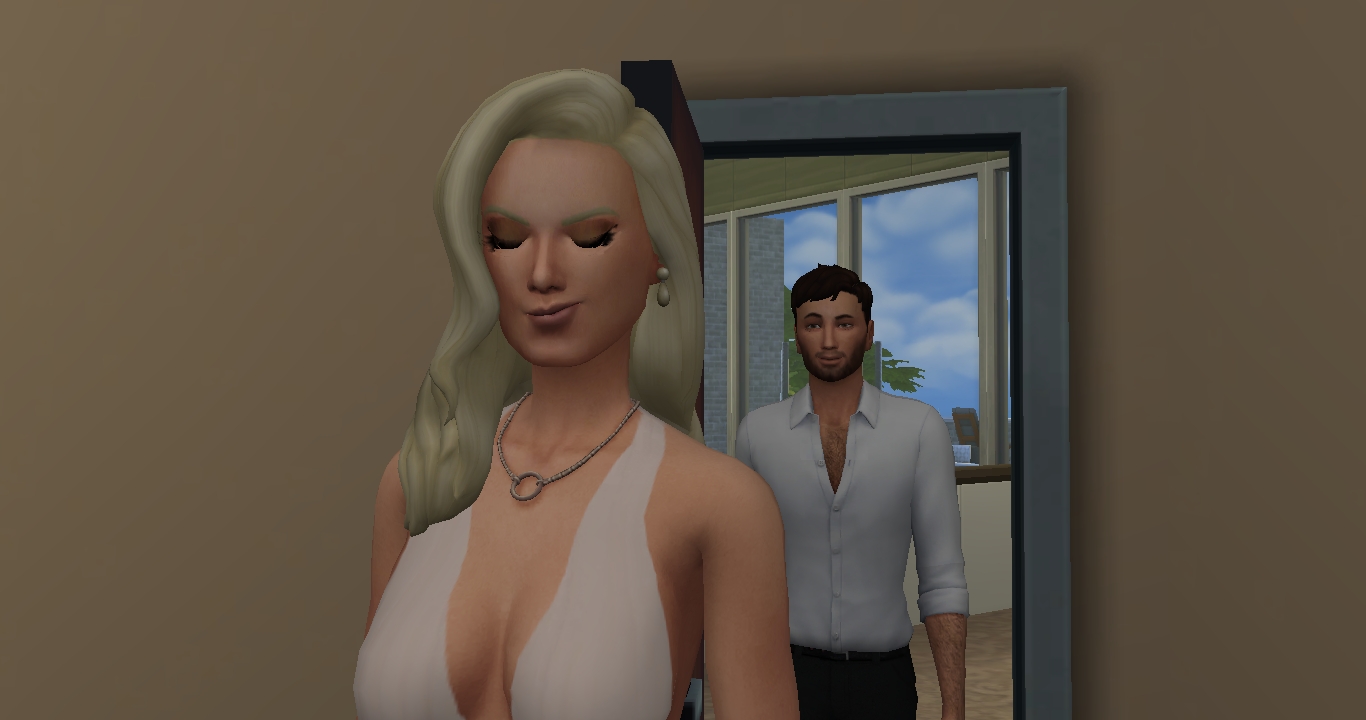 Matthieu: Kyungri, are you OK? You’ve been kind of quiet since the challenge!

Matthieu: Are you sure?

Kyungri: *sighs* I’m just thinking about someone and you’ve kind of broken the vibe, you know.

Matthieu: That someone being Dr. Kim? He’s more than just your plastic surgeon, isn’t he?

Kyungri: That is a conversation for another time. Like, never.

And while Kyungri tries to bat away questions about her infatuation with Dr. Kim, Gabriel and Marjan clean up the kitchen downstairs. Marjan, as usual, is lost in her thoughts, occasionally chirping while she sprays and wipes down the surfaces of the house. She stares at her reflection in the glass of the study table and momentarily looks angry, but quickly jerks out of it and walks away. 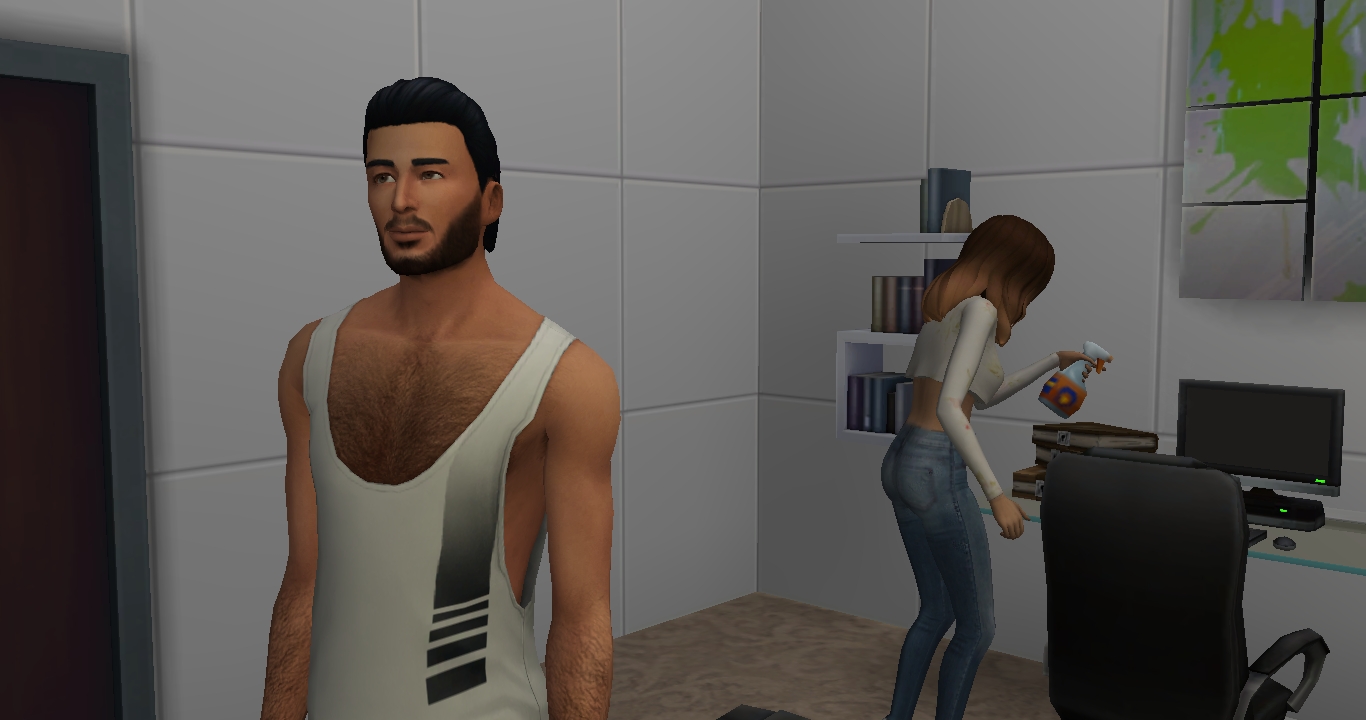 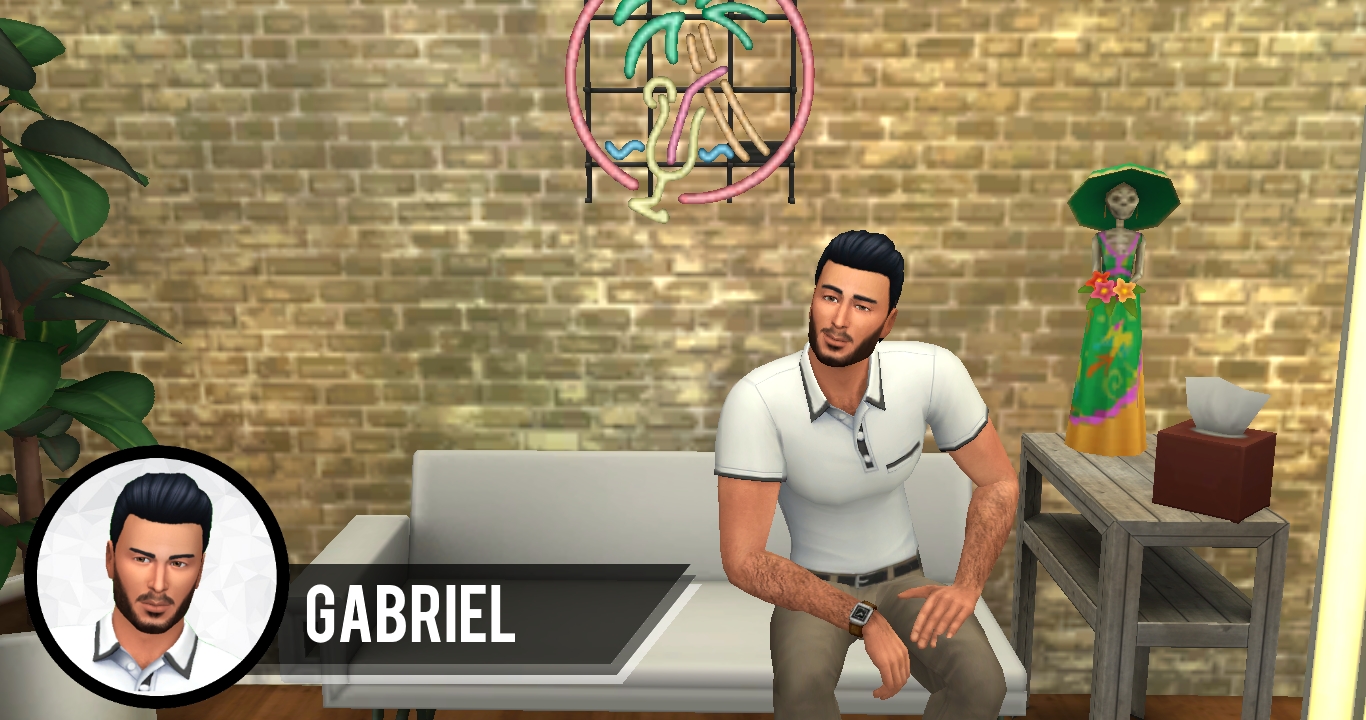 Gabriel: There’s something about that girl. I can’t put my finger on it, but I want to get to the bottom of it. I’ve been observing her, and she seems to let her façade crack at times. It’s fascinating. Oh well, she might not make it to next week, but if she does, I’m going to figure out what’s happening. 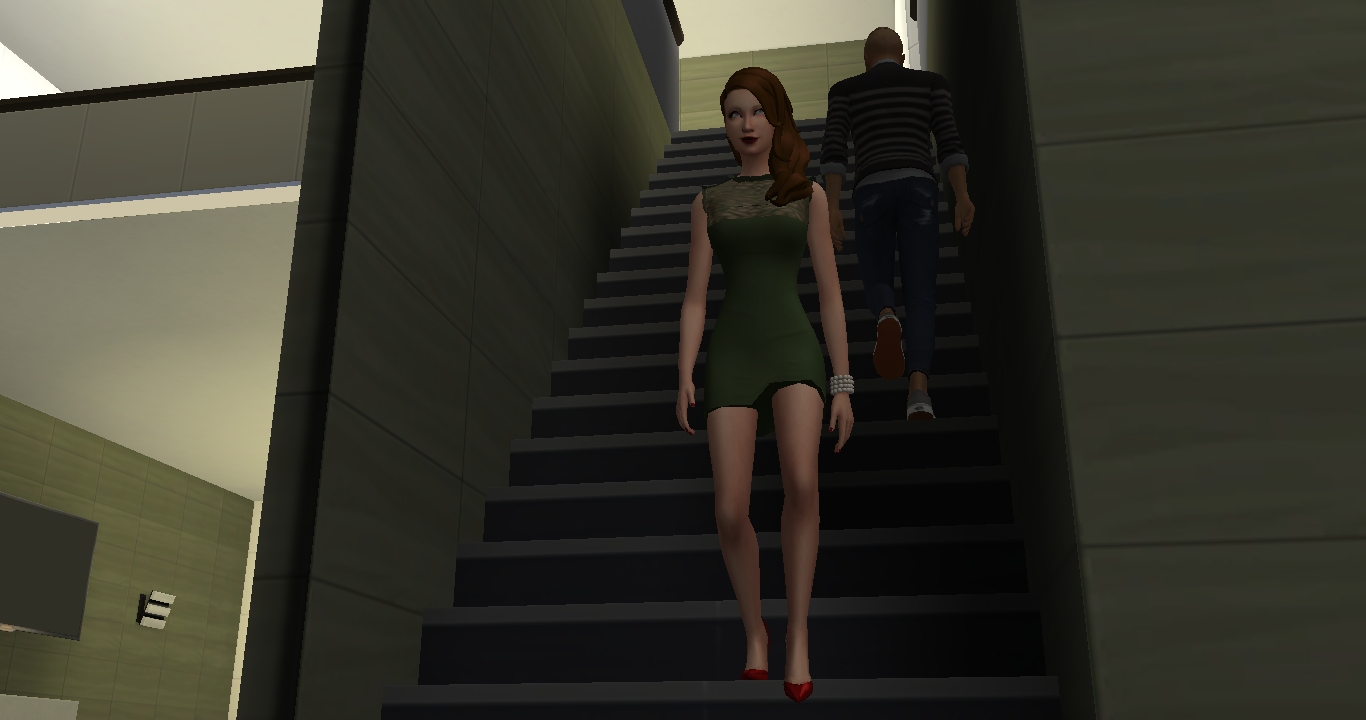 Charlee has been restlessly walking around the house after her conversation with Louise. She doesn’t want to admit that she’s nervous, but… she’s nervous, and it shows. The other housemates leave her alone, as they’re concerned that she’s going to explode at any moment. She stomps down the stairs and walks to her room to get ready for the elimination ceremony taking place in just a little while. 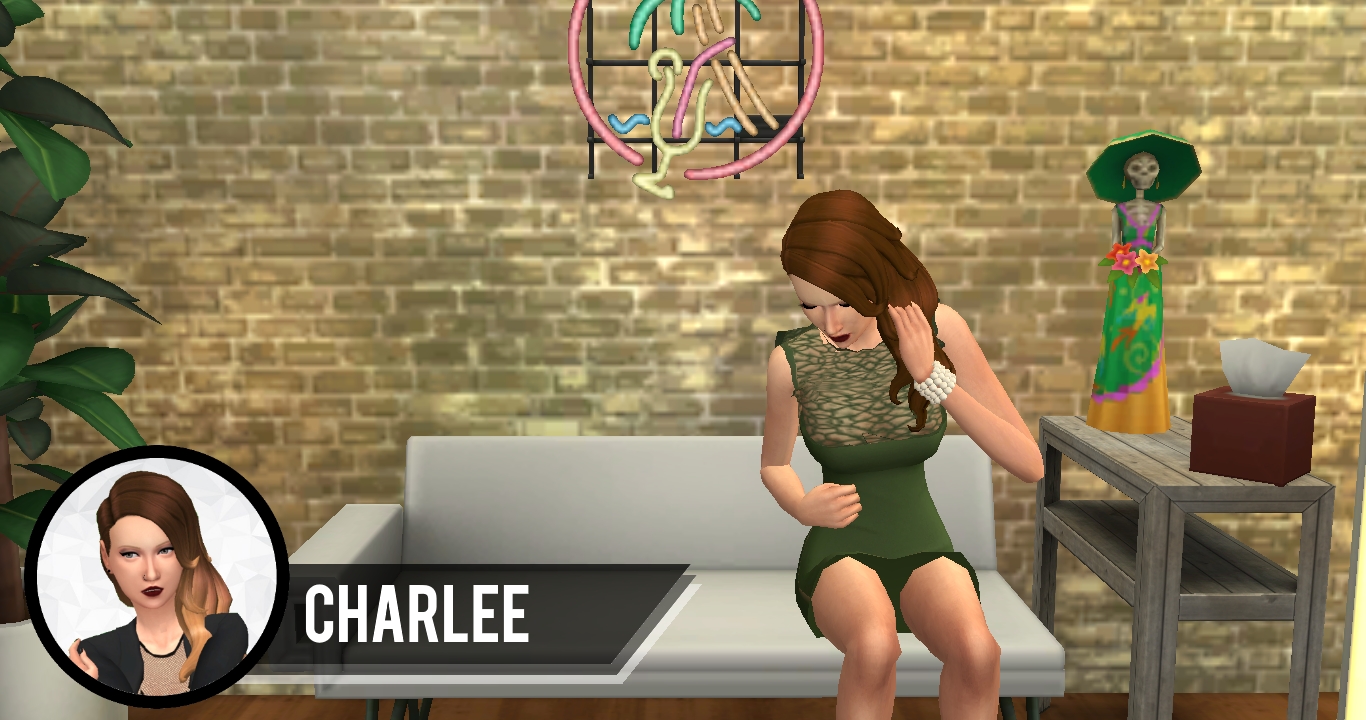 Charlee: I don’t know, I just got a bad feeling about this. I’m always the most cunning of contestants and I feel like I’ve dropped the ball this time. I just didn’t like serving other people, I’m so above that. I NEED to make it to next week.

After spending some time with Matthieu, Harrison goes off on his own and grabs a drink. Though he doesn’t seem to be sad, there are moments when he sighs and looks into his glass, frowning. It’s hard to tell what’s on his mind, as he isn’t talking to anyone. He sits and nurses his drink the whole hour before the elimination ceremony. 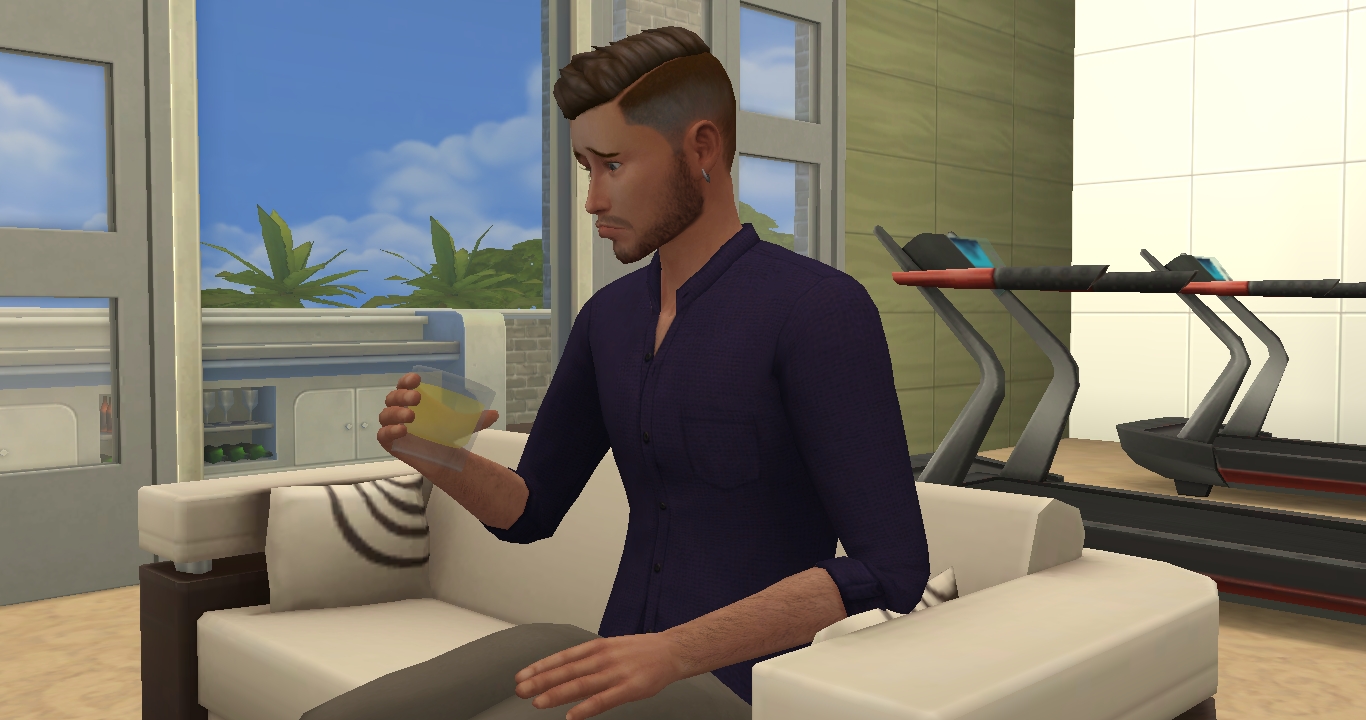 Jessie has come back inside, and is talking to Enca, who seems a little annoyed. She soon warms up, though, and the conversation flows animatedly for a while. 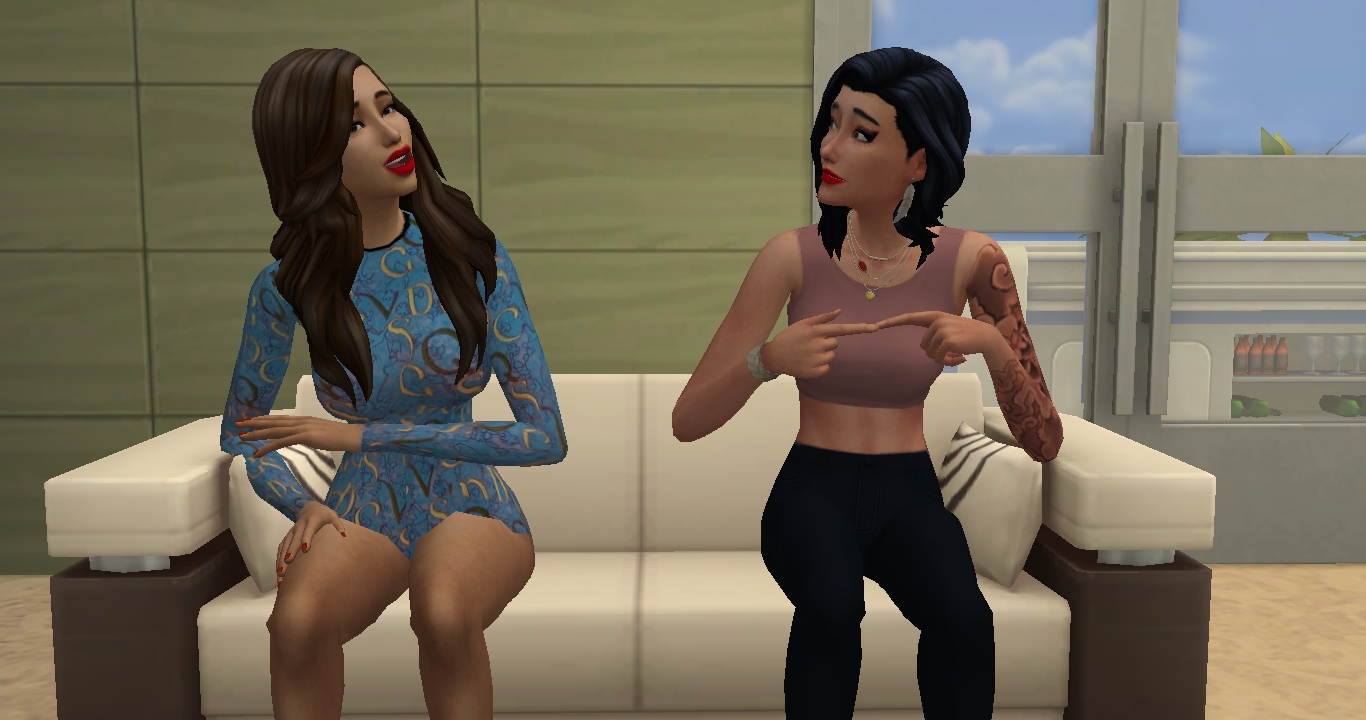 Jessie: I’m so sorry, Enca, I didn’t mean to make this that dramatic. I shouldn’t have invited Patricio!

Enca: It’s totally fine, don’t worry. I wanted to be angry at you, but honestly that needed to happen.

Jessie: I didn’t mean to be the catalyst for that breakup!

Enca: Oh, you weren’t though! That idiot had it coming… thinking he could take advantage of me… he’s done in this city. He’s done in general.

Jessie: Good for you! I’m happy that you seem content with the outcome. Best case scenario, honestly! I was concerned that my interfering would make me get some enemies…

Enca: Oh, girl… not everyone is happy, let’s put it that way. 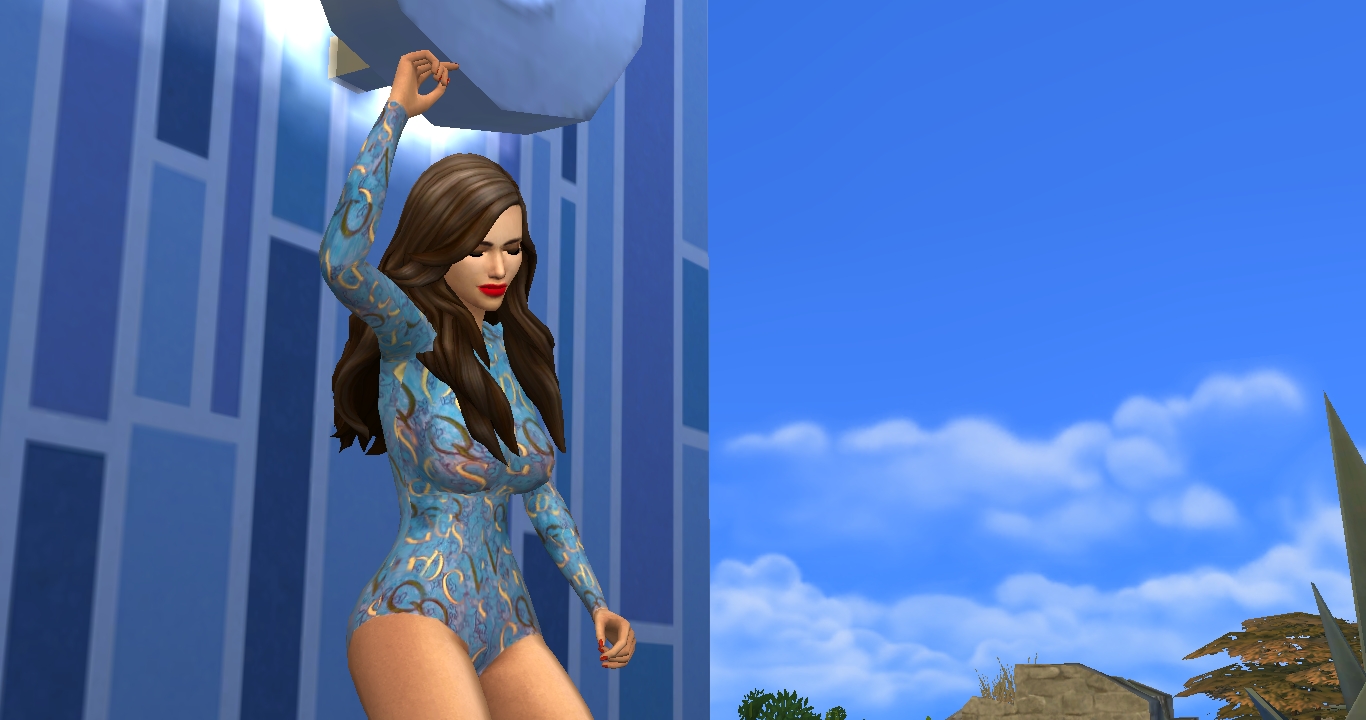 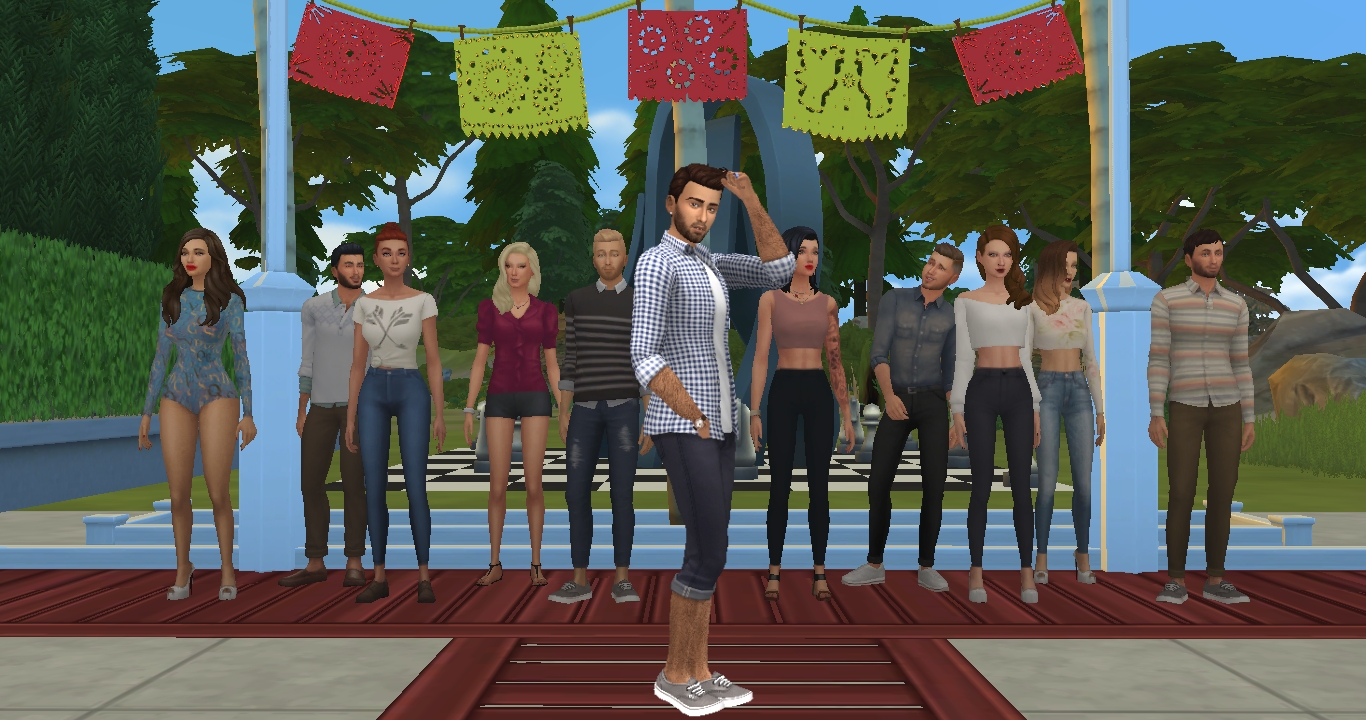 ajmkv: Hello, and welcome to the fifth elimination ceremony! Contestants, you are all looking fantastic, and it makes me sad to think that one of you has to leave tonight… I almost want to cancel the elimination, but I’m also a messy drama queen, so I’m excited to see what the results will be! Today we will be saying goodbye to one of you, which means that only 9 of you will continue on in the competition. Let me remind you of our prizes: the winner will walk away with 1,000,000 Simoleons, a brand new home, their own TV show on SimTV, and will also be the face of SimNation Media Corp. for a whole year. To leave the competition now would be quite the shame!

Now, before we see who’s going home, let’s see who is not. Marjan, will you please step forward? 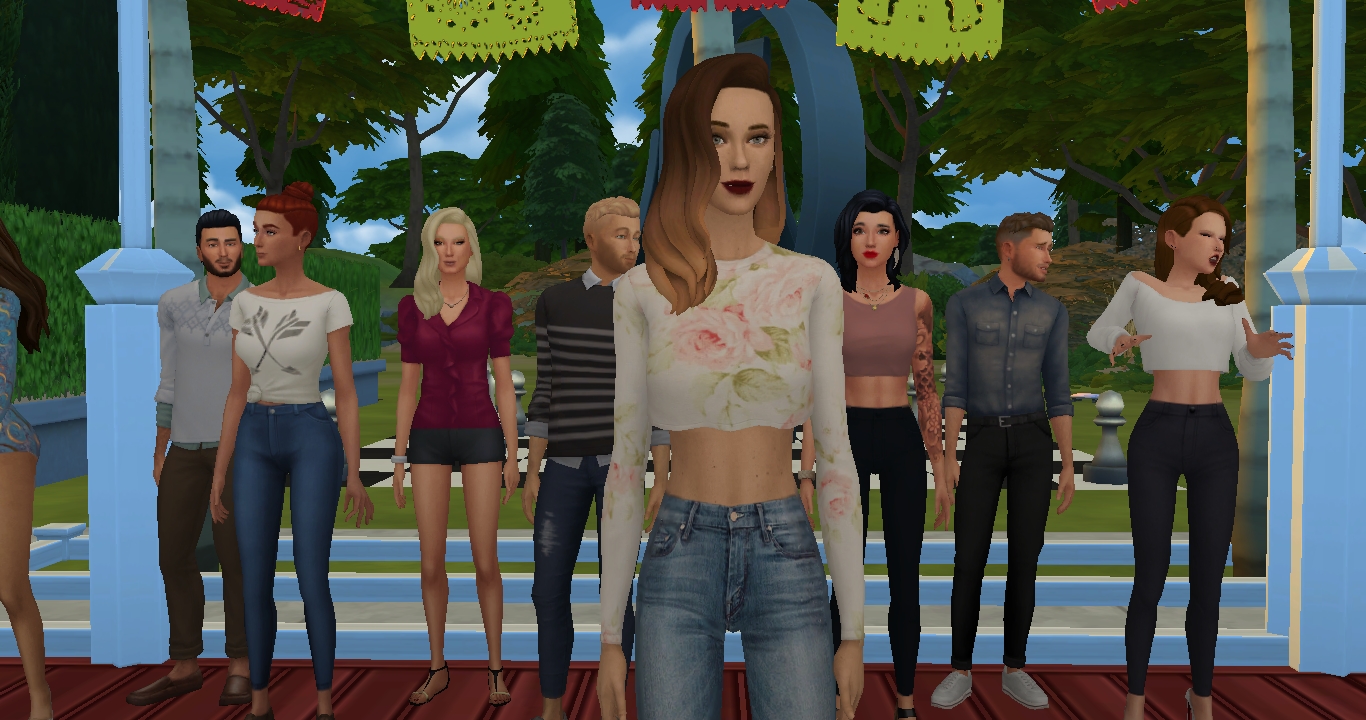 ajmkv: Charlee, you may be looking upset, but Marjan has swept the fan vote, picking up a whopping 52% of the votes this week!

ajmkv: Are you OK, Marjan?

ajmkv: Well… uh, anyway, congratulations Marjan! You’re safe, and you can go back to your place. Carefully, don’t trip. And now, can Charlee and Gabriel please step forward? 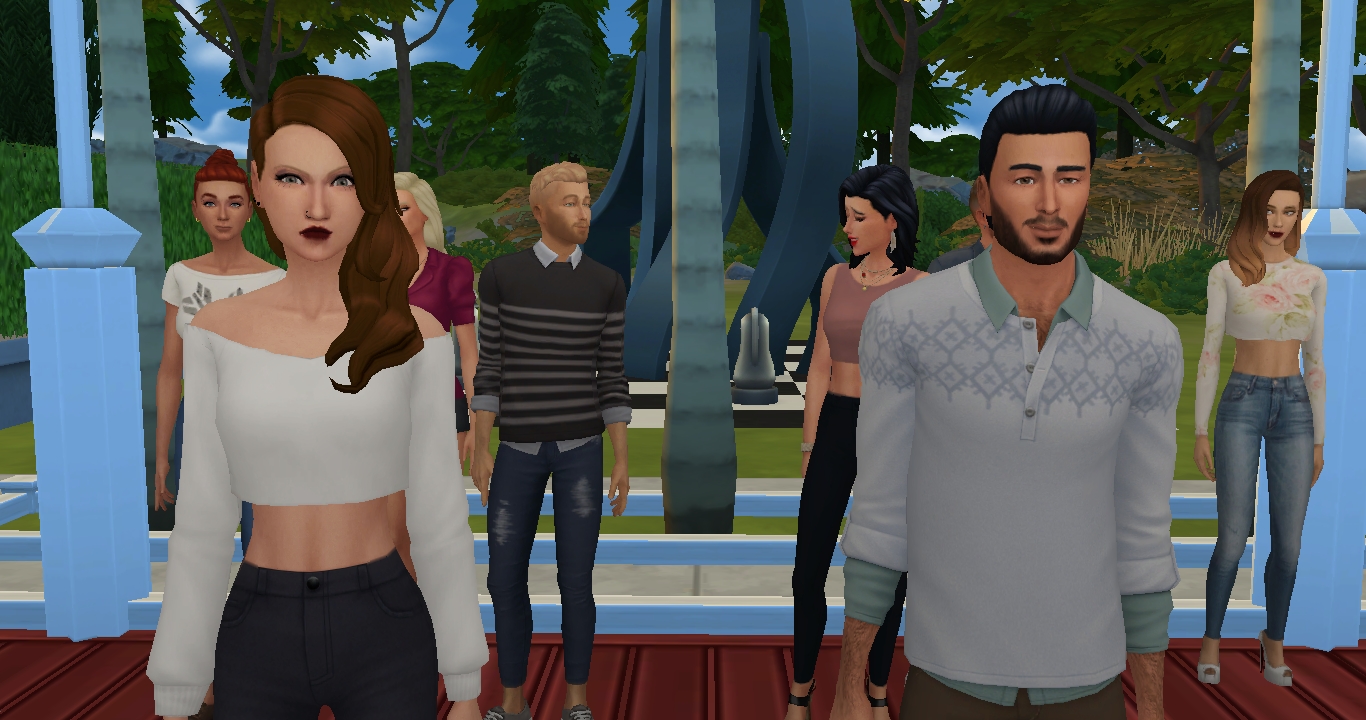 ajmkv: Boy oh boy, am I surprised to see you here. It seems like you two are strong competitors, but you’re just not too popular with your housemates. But are you popular with the audience? Well… we shall soon find out. 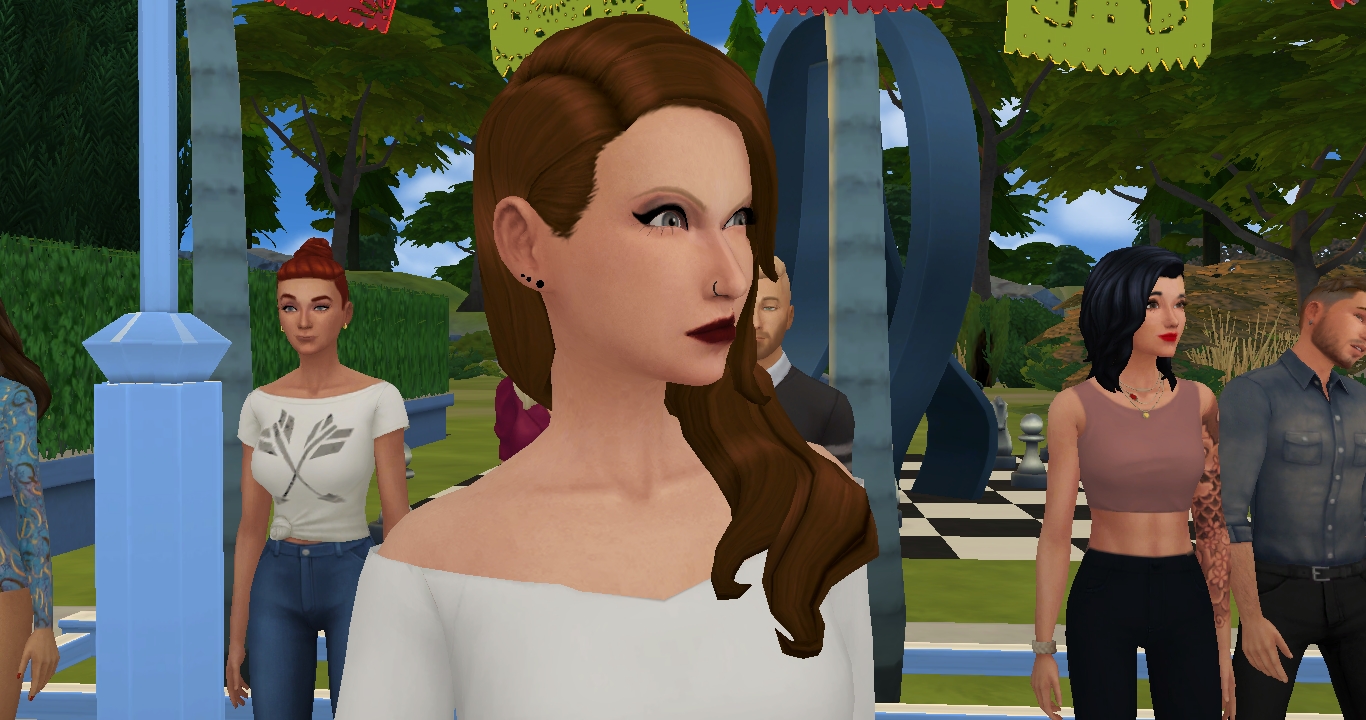 ajmkv: Charlee, you’re the most unapologetically competitive contestant, and though that’s lost you points with your housemates, you continue on your relentless quest to get everyone else eliminated. But now, you’re here in the bottom for the second week in a row. It’s not a good place to be, Charlee. 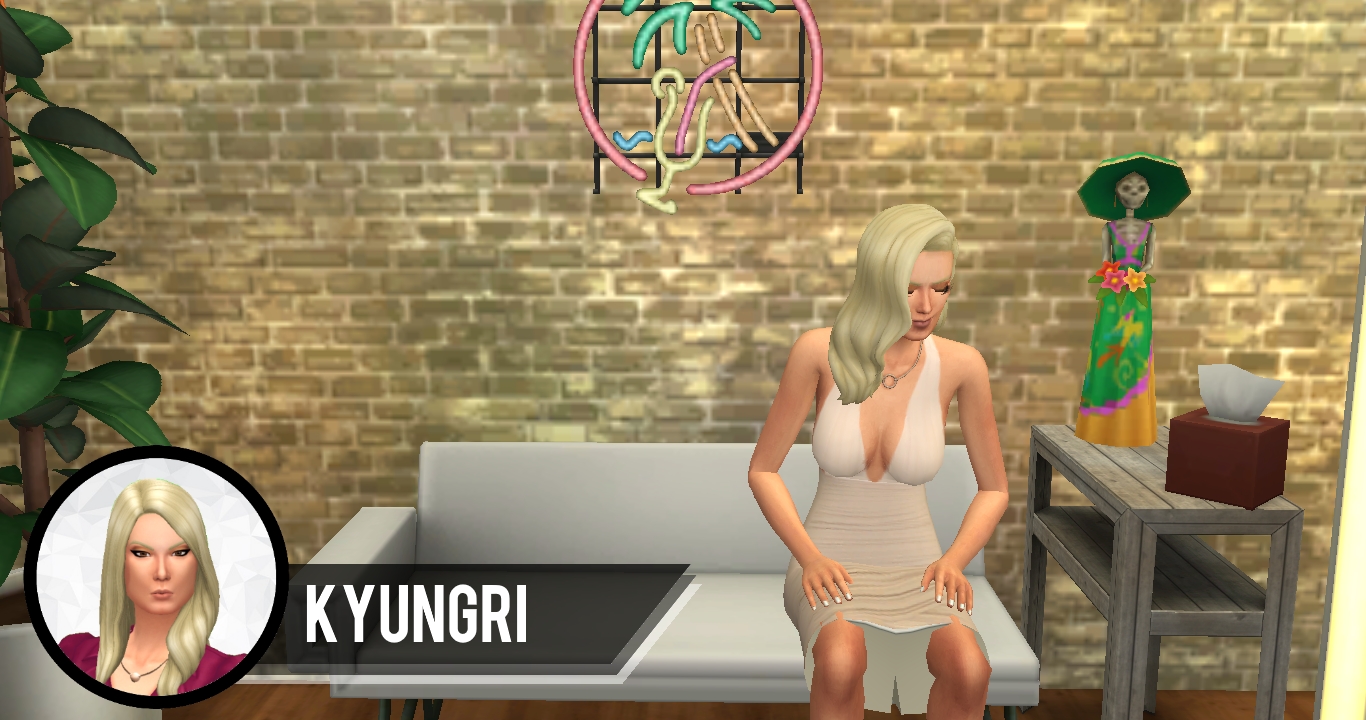 Kyungri: Yeeeeeeees, rip into her, ajmkv sis. I am so ready for that disgraceful girl to go. The only thing is, who’s going to serve me now? *cackles* 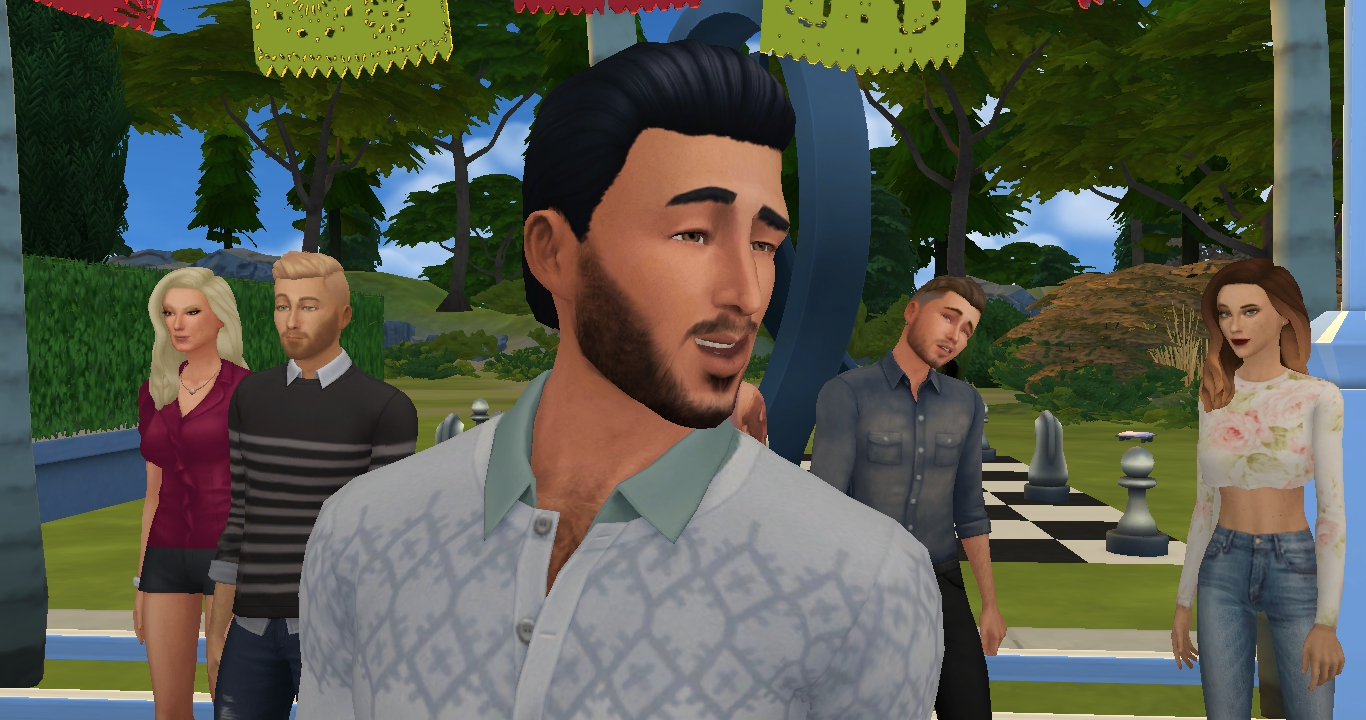 ajmkv: And now, Gabriel. You’re a charming and handsome man, and honestly I did not expect you to be in the bottom. You’ve done pretty well in the competition so far, and you’ve been popular with your housemates. I’m sad that you have to land down here, but maybe this will be the push you need to really tap into your potential? Well, if you survive…

Now, I really don’t want to send one of you home, as you’ve both been a joy to have on the show… for various reasons. Isn’t it ironic that the very first hookup on the show is now here, together, in the Bottom 2? 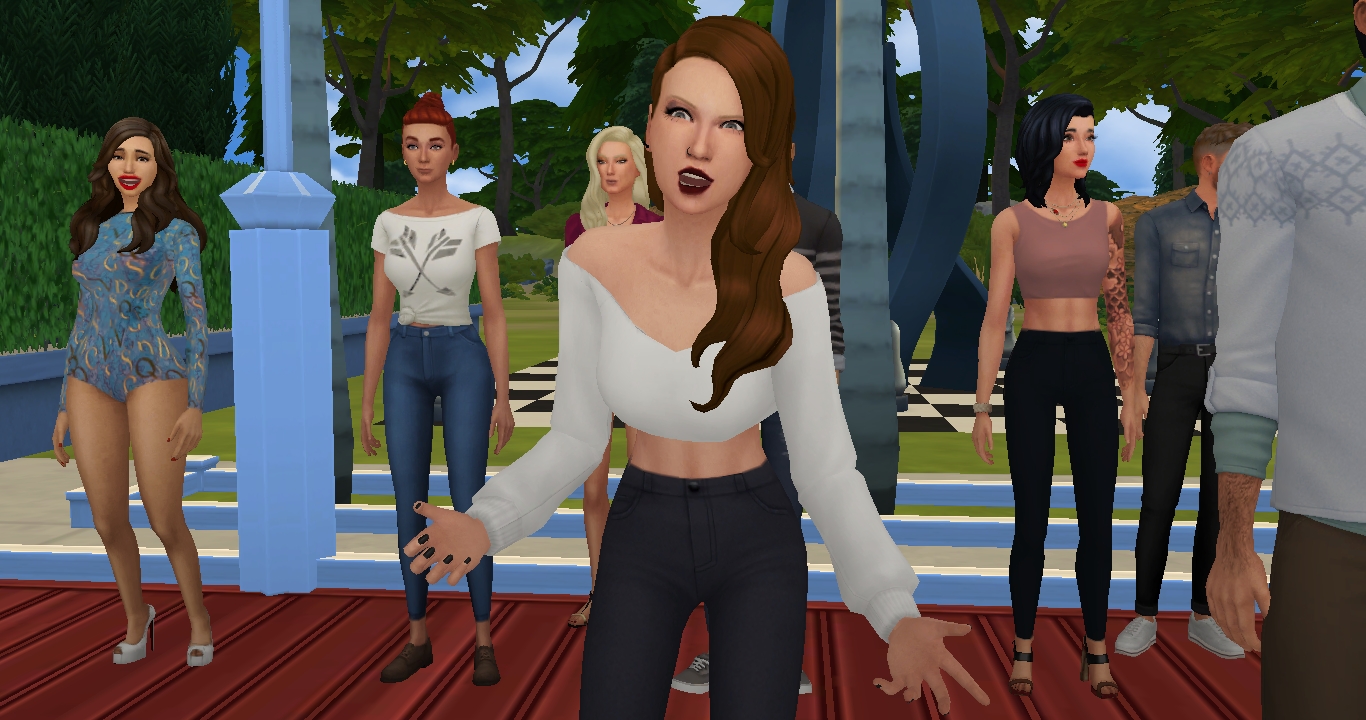 Charlee: Is that really necessary now? Plus, we never even really hooked up! It was just put on for the cameras! I wouldn’t hook up with this man for all the money in the world! That’s ridiculous, ugh.

Gabriel: Um, I’m pretty sure we—

Charlee: No we didn’t! Ever!

ajmkv: Well… all right, let’s calm down. One of you will be going home very shortly, and honestly it was a very tight competition. Throughout the voting period, you two switched spots behind Marjan, and the votes were always very close. However, only one of you will be safe. So, with a final figure of 26% versus 22%, the person who is SAFE… is… 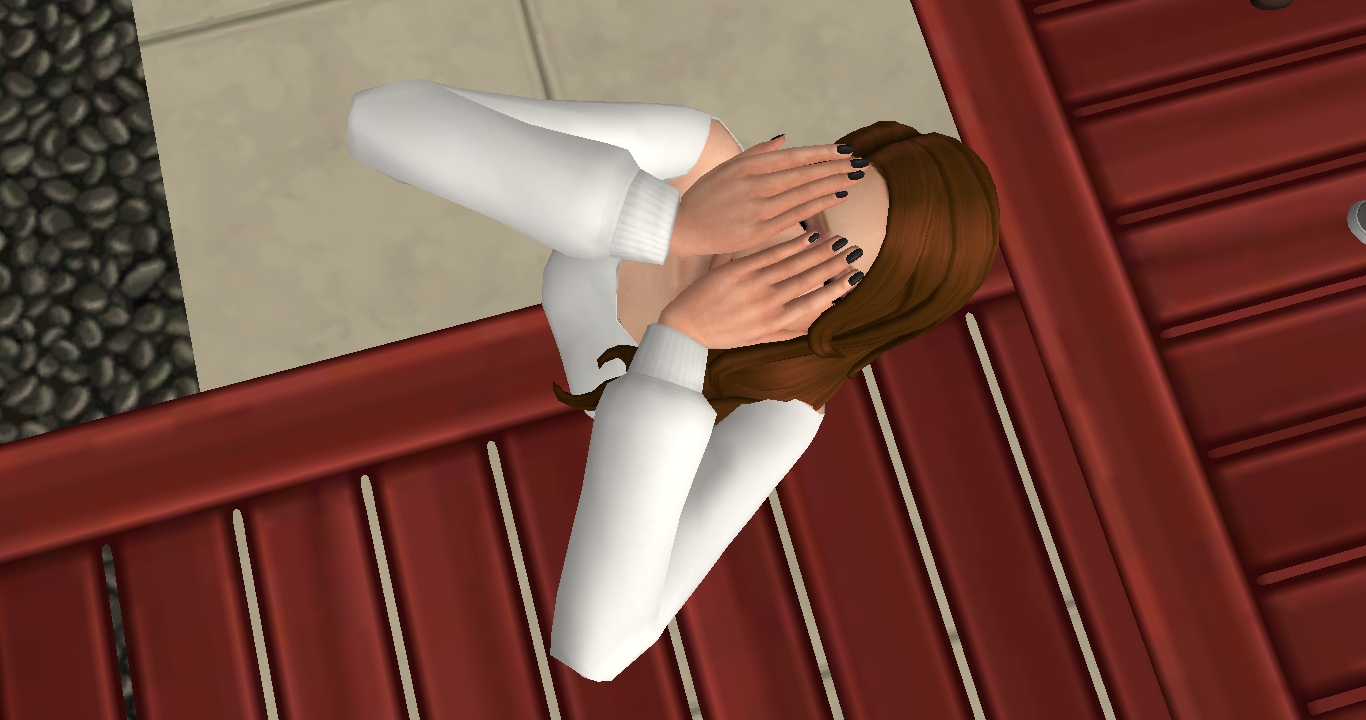 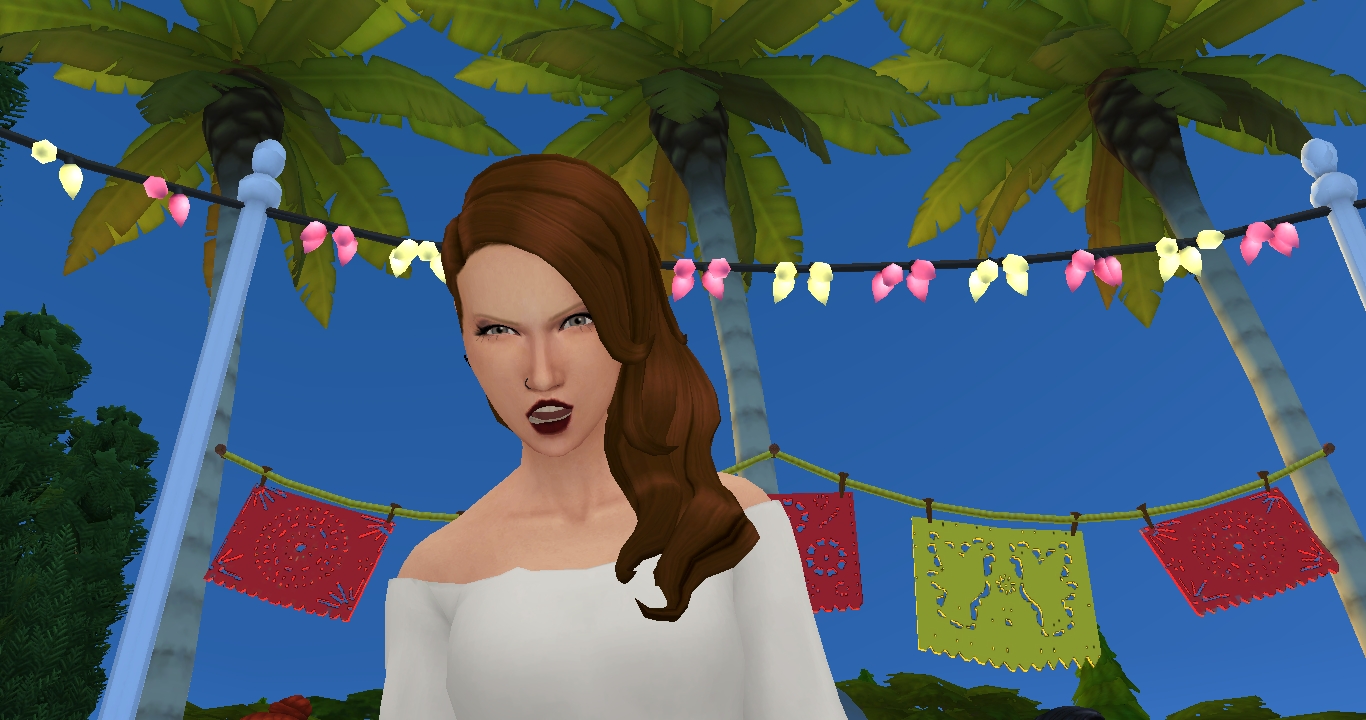 Charlee: This isn’t over, I’m going to get all of you. Every single one of you is going down, somehow, somewhere, sometime. UUGHHHHHHH!

ajmkv: Charlee, you can go and say goodbye to your now ex-housemates. 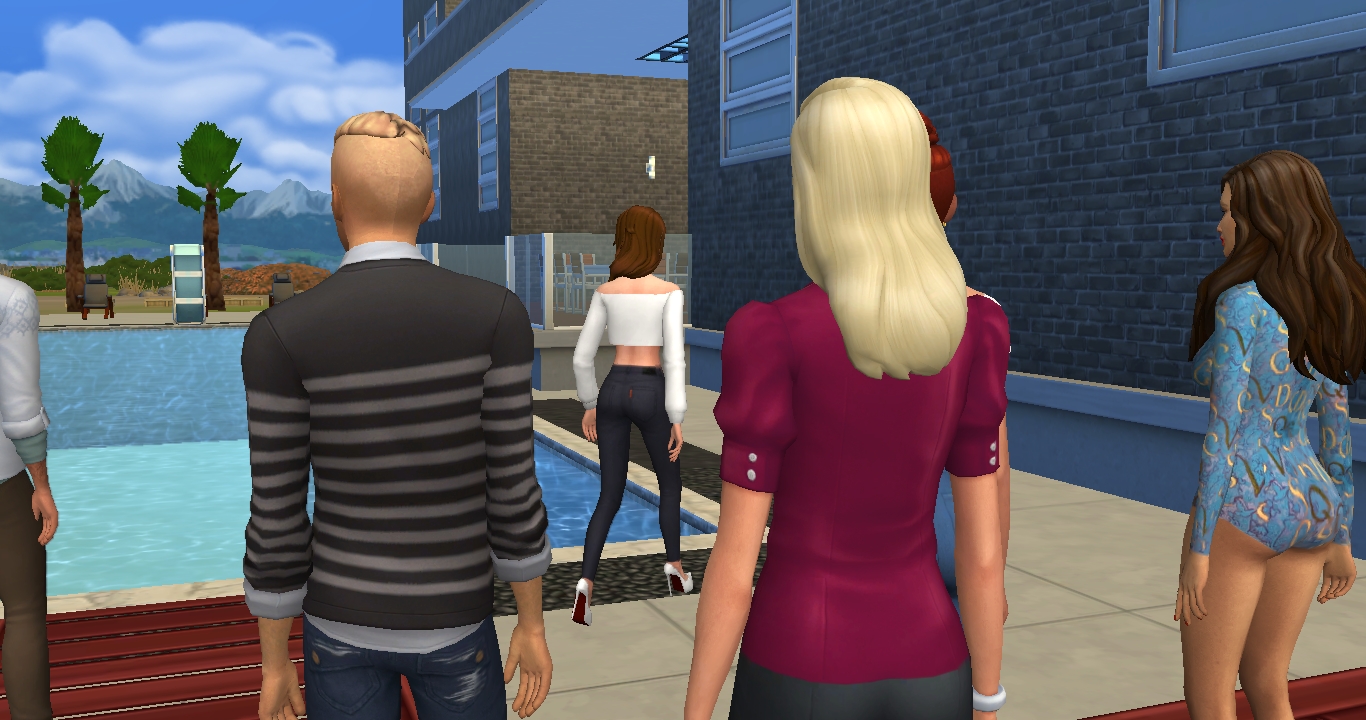 Kyungri: *calling out* Call me if you need a housekeeping job, girl! 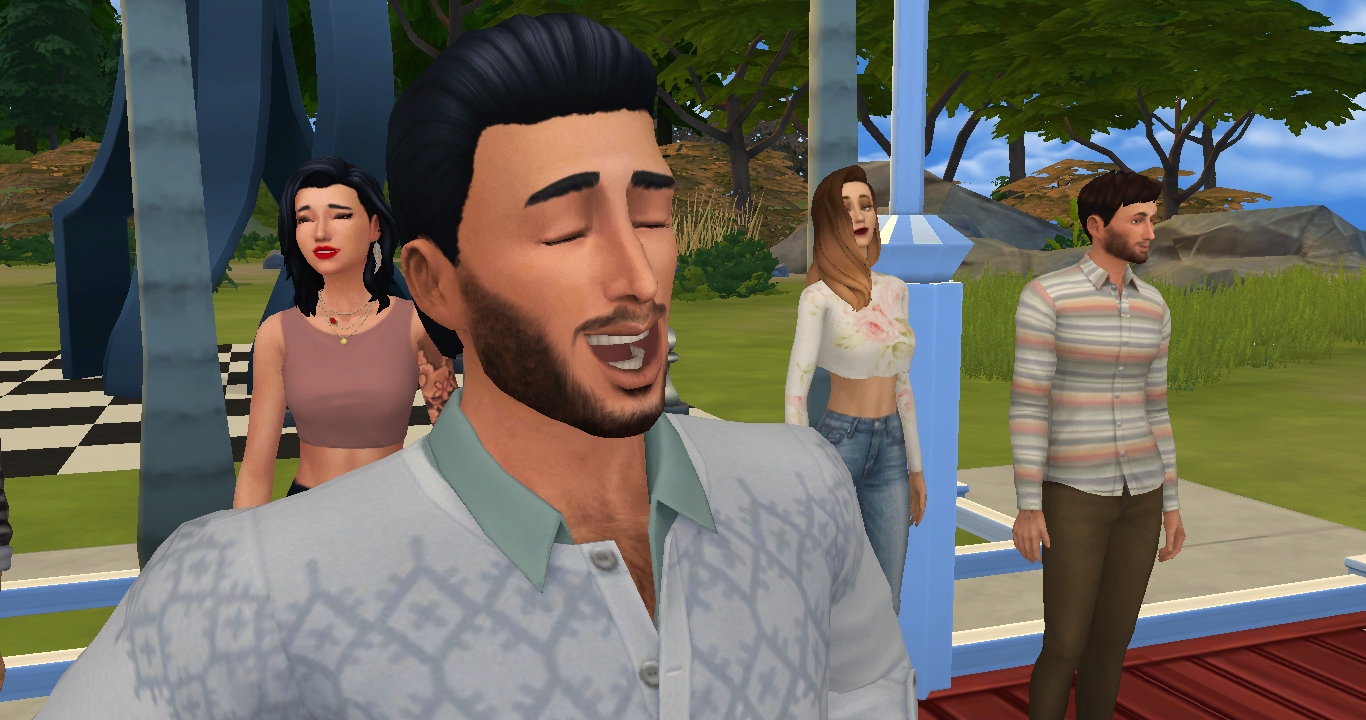 ajmkv: Well… um, wow. Um, congratulations, Gabriel! You’re deservedly still in the competition. Make sure you step it up next week!

Gabriel: It feels good! Thank you fans, for voting for me! I promise I’ll do better next week. 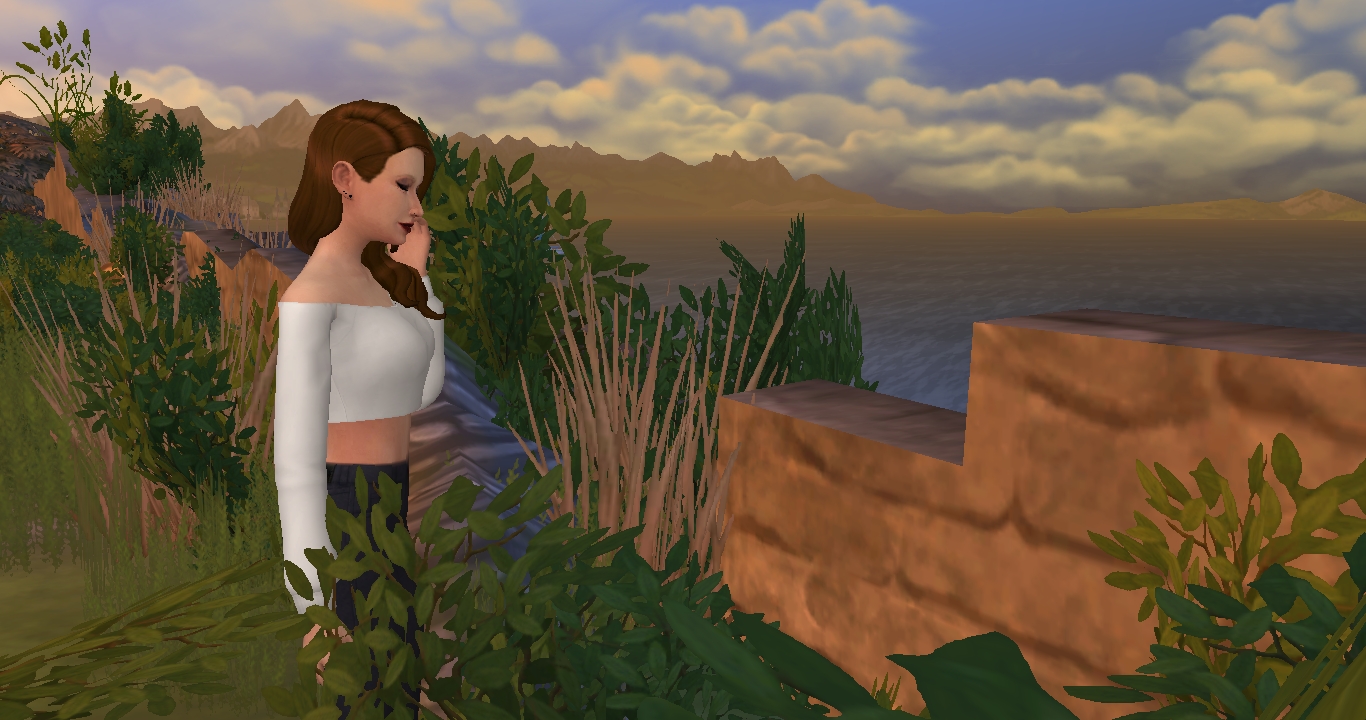 Charlee: Should I have stormed out like that? Well, I don’t really think so. I think I should have done a lot of things differently, but it’s too late for that now. I’m going home, and I’m going to think about what I’ve done. I’m not going to change… well, maybe I’ll soften up a bit, I guess I did come off as too aggressive… but you WILL see me again sometime, I promise. If anything, you will see me finally beating down that plastic troll doll Kyungri on live TV. Ah, I guess I’ll go now… back to real life for me, again. I’ll miss this…

And that’s it! You guys came out in droves and voted for your favorites, which unfortunately meant that poor Charlee had to go home this week. Will we see the rise of a new villain or will her elimination mean that there’s finally going to be some peace in the K&GI house? Are you happy she’s gone? Make sure to sound off below! Tune in very soon for another episode of Kev & Get It!

Will Charlee have changed her ways? Catch up with her in her special K&GM episode!