Previously on Kev & Get It: As the contestants got tired of the ups and downs of the competition, the cracks began to show. Marjan especially seemed like she was heading toward a breakdown, and Enzo only appeared to be down on himself due to his rivalry with Gabriel. Even though he was finally getting to spend a lot of quality time with Matthieu, Harrison also did not seem happy, and spent a lot of time thinking about the budding relationship. A surprise challenge orchestrated by Jessie invited some very special (and dramatic!) guests that brought out both the best and the worst in our contestants; Kyungri was ecstatic to see her plastic surgeon (and maybe even more?), and Gabriel wasted no time in getting reacquainted with his wife. Marjan was also thrilled to see her best girlfriend arrive, but the reunion soon turned strange when her guest dropped some cryptic orders. Enzo resented Gabriel and his wife, Manon, who just so happened to be his own ex-wife, and this further fueled the rivalry between the two men. Enca exploded and broke up with Patricio, who finally overtly showed his true colors. Matthieu’s special guest caused trouble between him and Harrison, but also helped to end the throuple drama that had been plaguing Matthieu’s mind in the last weeks. Jessie reveals to Louise that it was she that helped choose the good and not-so good pairings for the episode, and this angered her housemates. However, it was Charlee who failed spectacularly at the challenge, refusing to play nice and getting verbally served by Manon, and in a surprise twist, the villain was eliminated. Nine contestants remain. Who will go home next? 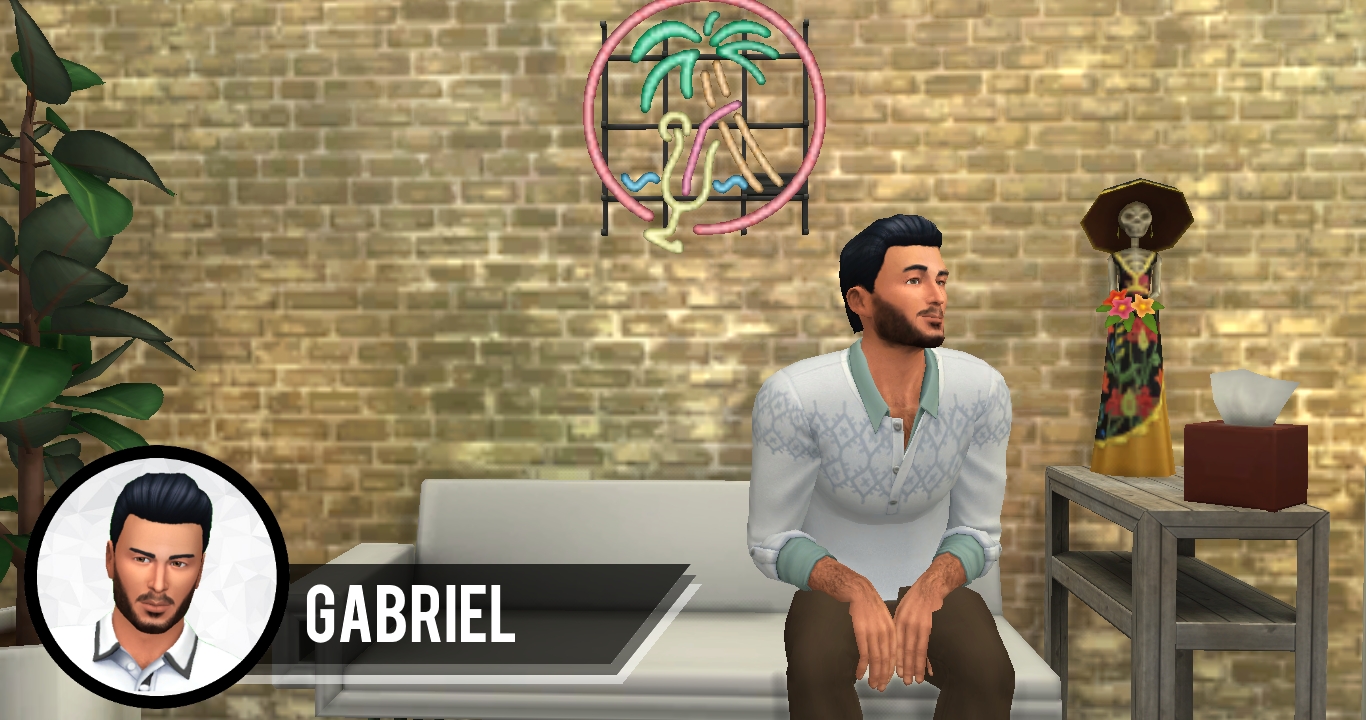 Gabriel: Man, I’m feeling good. I was so happy to see Manon last week! I feel like it’s given me a lot of good vibes and energy for this coming challenge. I’m sure I have it in the bag, there’s no way I’d lose! Sure, I was in the Bottom 2 last week but the fans decided to save me, and that’s significant! I know that the only way to go is up, and I’m going to shoot all the way to the top. 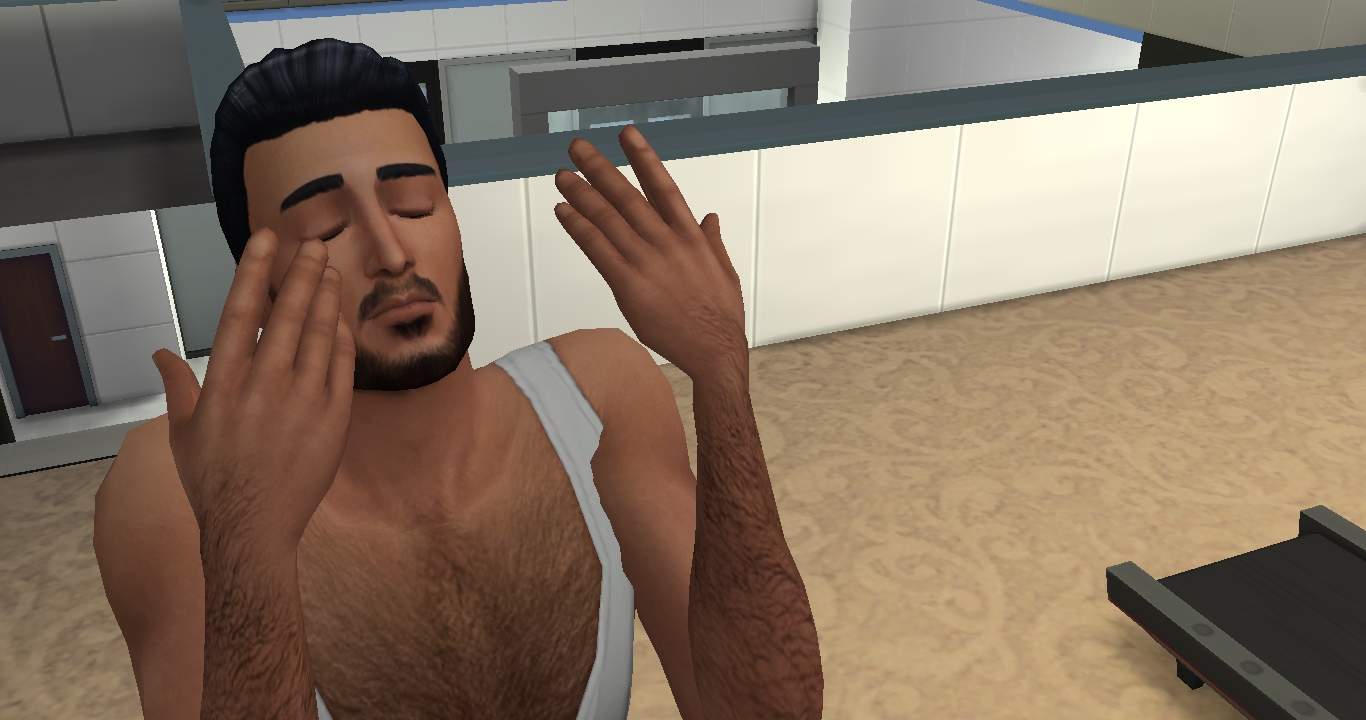 And indeed, Gabriel’s good mood is evident to the other contestants the morning after the elimination. While everyone else slowly wakes up and gets ready for the day, Gabriel is already up, happily working out and humming. Some of his housemates grumble, feeling irritated with his good mood, but some others smile at him and feel motivated by him to do exercise themselves.

Louise especially seems to be pumped up by that display, and goes outside for a run. She’s thinking about the competition, and about her goals. She feels like she’s come a long way from the beginning of the show, when she held so much bitterness toward her father and when got into a fight with Kyungri, and she’s proud of what she’s learned. She’s been feeling something new recently, though, and it’s been bothering her. 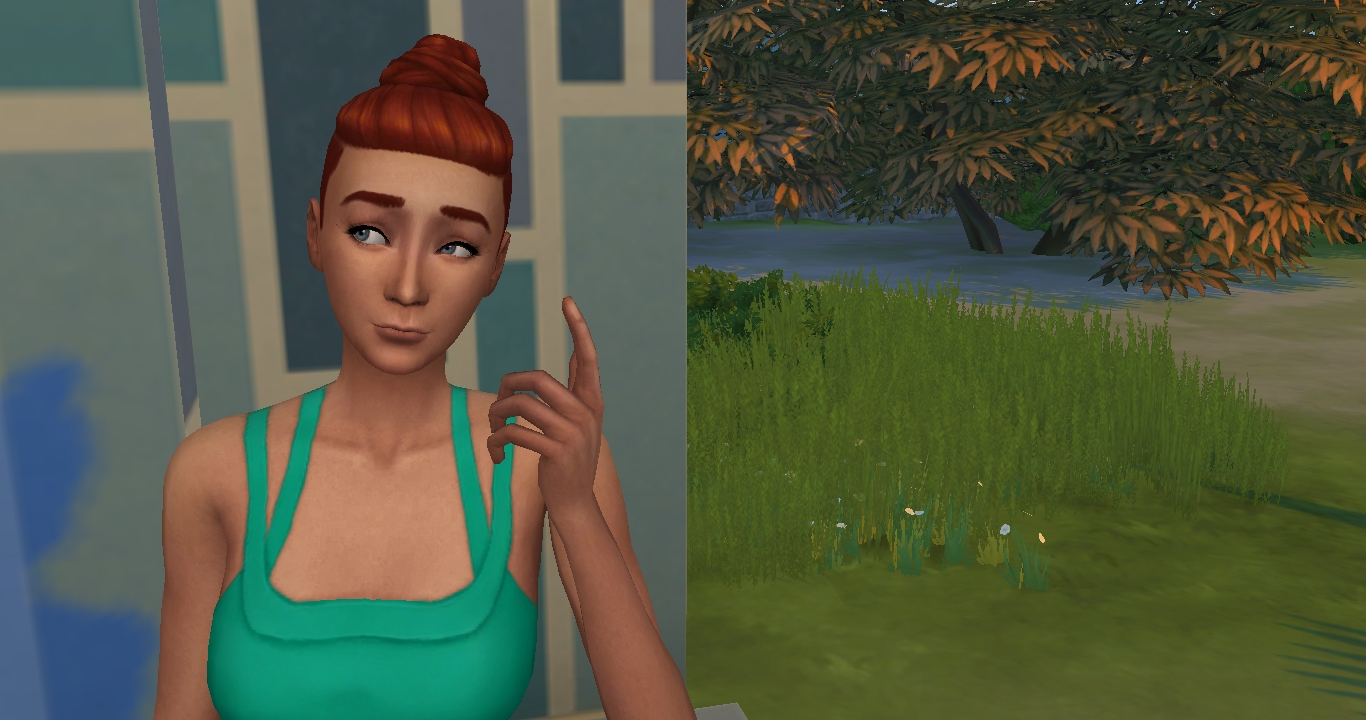 She stops to catch her breath, and her thoughts continue to whirl around in her mind. She’s uncharacteristically quiet, but a smile slowly lights up her face. She quickly shakes herself off, though, and continues on her run. 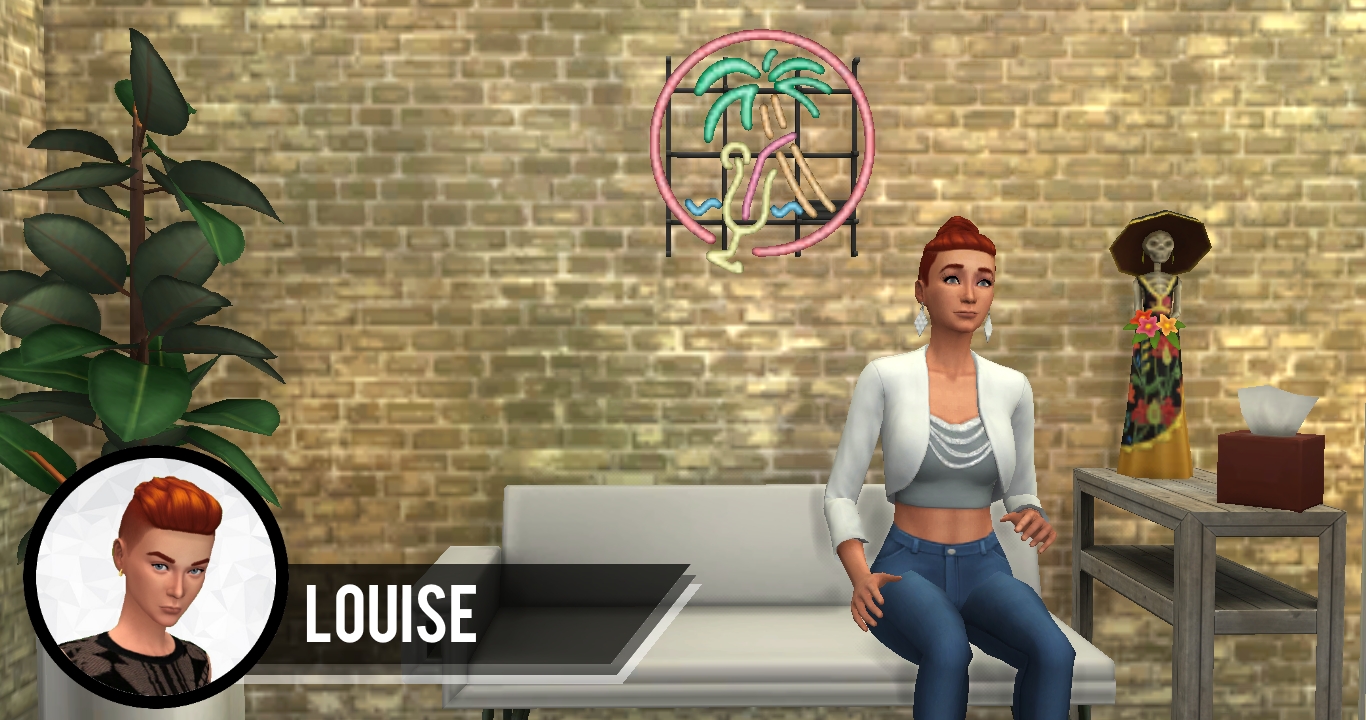 Louise: I just can’t stop thinking about it… I know it’s silly and it’s not what I came here to do, but I… just can’t. It’s been taking over my mind recently and it feels so good! I’m happy. I can’t tell anyone about it though, I’ll only get laughed at!

Meanwhile, back at the house, Harrison and Matthieu are taking some time to catch up after they didn’t spend much time together last week. However, since they went into the sauna, it doesn’t seem like they’re doing much talking… 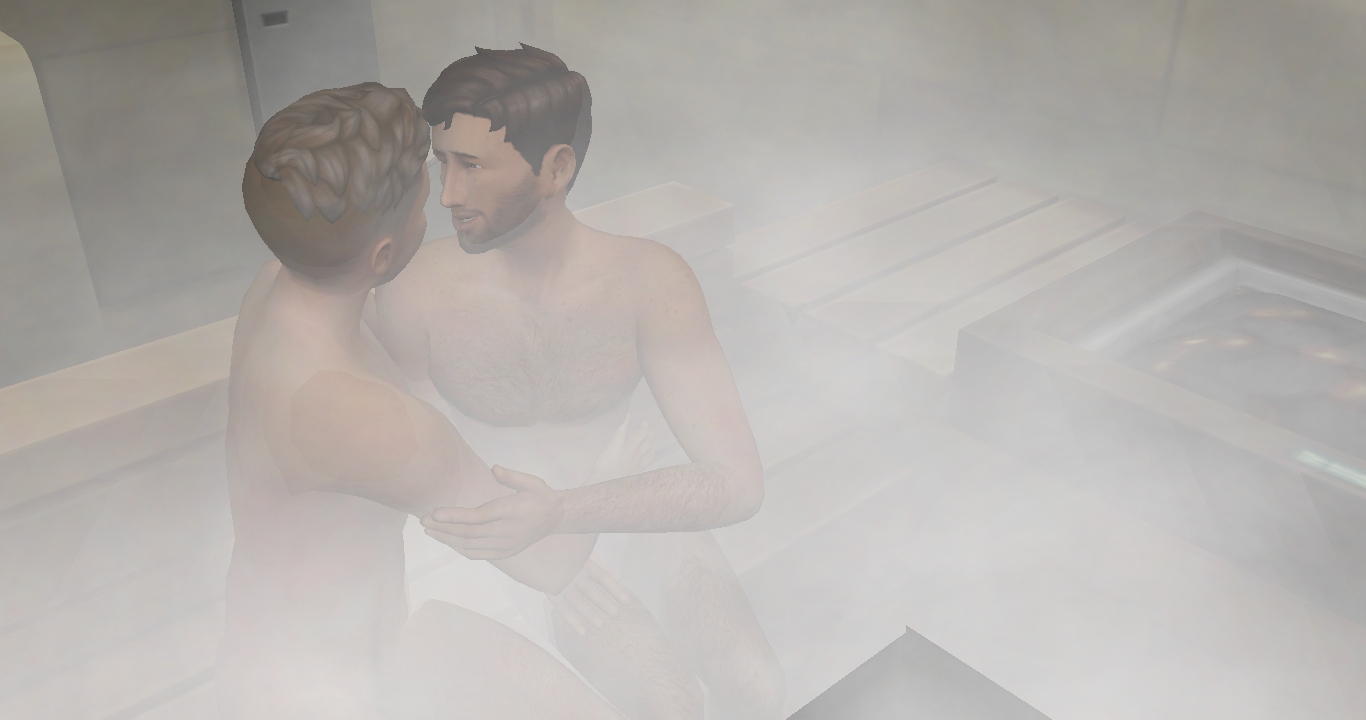 Harrison: I’ve missed you! I’m happy that we get to spend some time together.

Matthieu: You know, we can spend as much time together as you want! We haven’t even received instructions for this week so let’s take advantage of that while we still can.

Harrison: I think I know what I want to do… 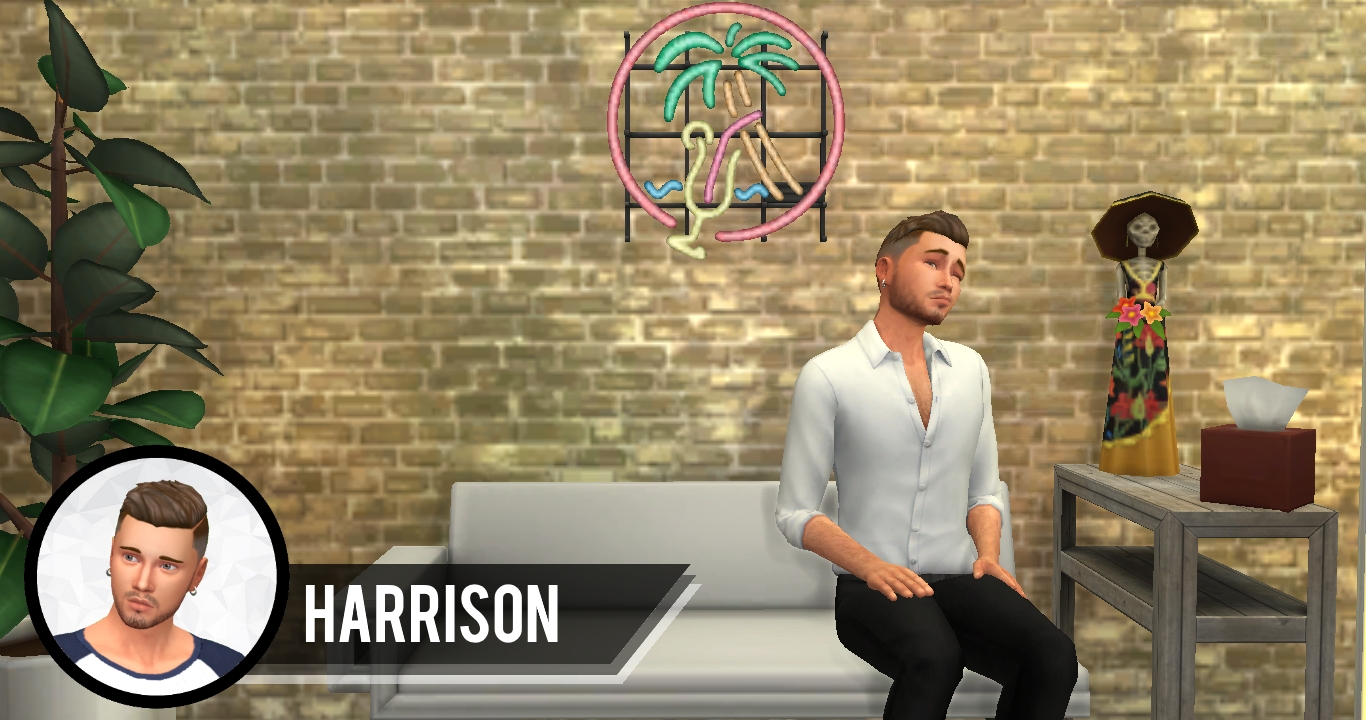 Harrison: I know it seems like I’ve been really frisky recently, but I swear that it’s not what it seems, I mean, I’m taking care of myself and everything. I’m not going to do anything that’s too much just yet, I promise!

Enzo hasn’t been feeling too well recently. Last week, he felt like he was inferior to Gabriel after having seen how happy and satisfied Manon was with him. It’s always a competition with him, and Enzo feels like he’s lost. Even though he’s been doing well in the competition, he can’t shake off the feeling that he’s not doing well mentally. Success in his family, in his career, in the competition… it all isn’t seeming to help. He’s down and can’t figure out why. 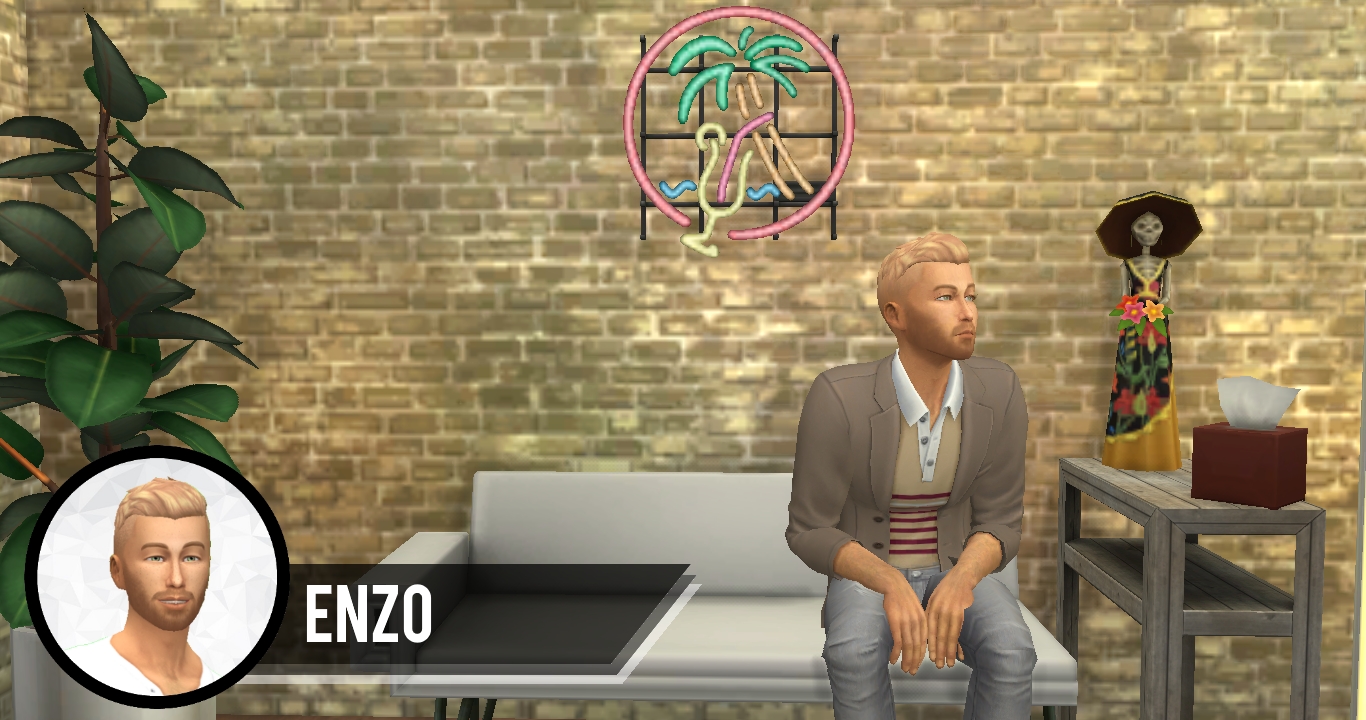 Enzo: I hate that I’m being like this, with so many people watching. But I can’t help it, I just want to be alone, I’m not liking all this attention. Who would have thought? And here I was, thinking that I wanted to be in the spotlight… 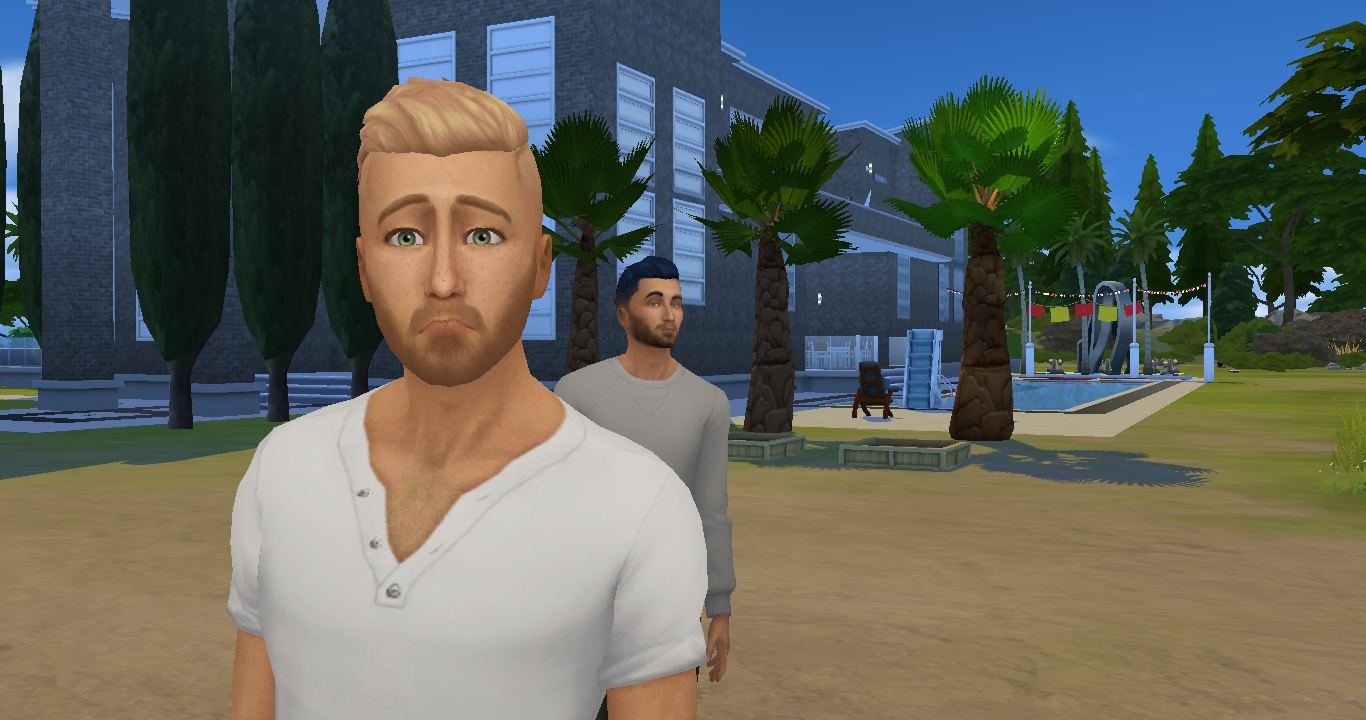 But as he thinks about what’s going on, spending hours just walking around the yard, someone walks up behind him and approaches him while smiling. Who could it be?

Benjamín: Hey, sweetheart! I’m so happy to see you! 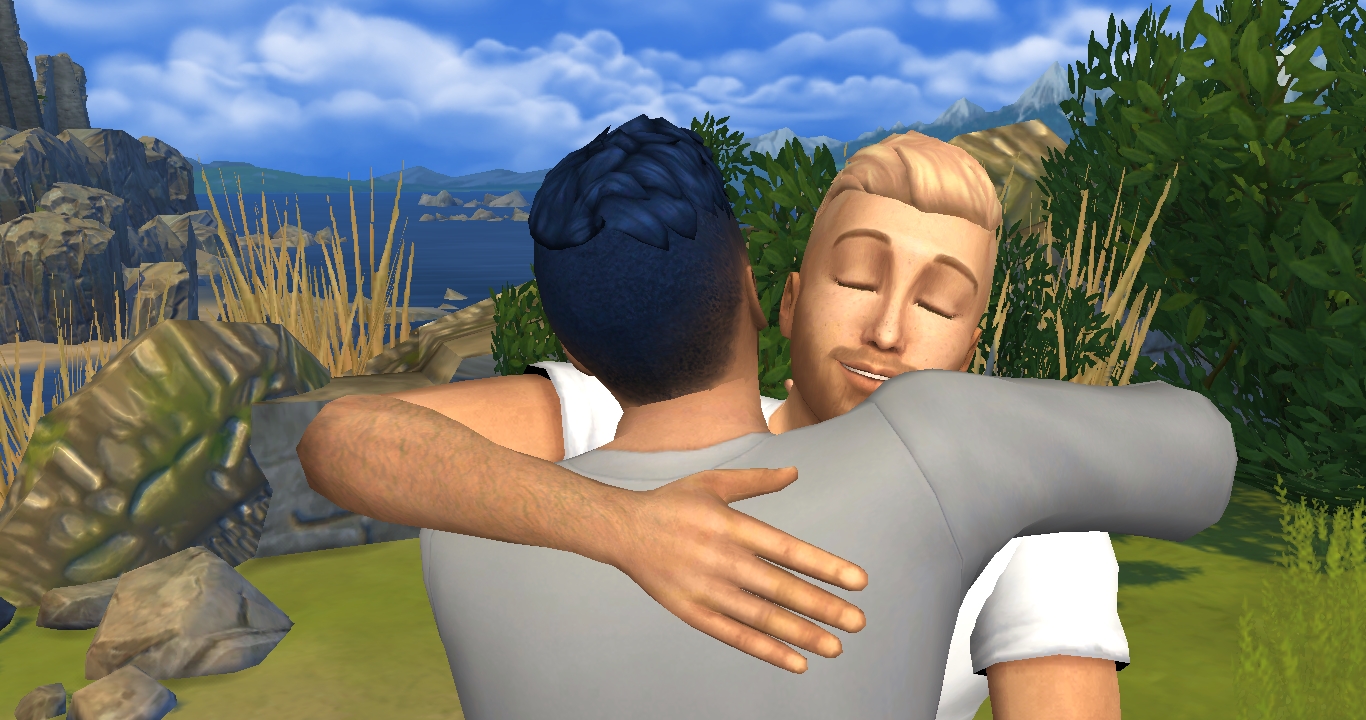 As Enzo hugs his husband, he finally looks like he’s relaxing. He practically melts into Benjamín’s arms, and embraces him for a long time. When he finally breaks the embrace, he looks happier than he has for a while, and just stares into the other man’s eyes.

Benjamín: So what’s been going on?

Enzo: Oh, you know, not much. I can’t tell you too much about what we’ve been doing, you know, because the producers don’t want details to leak.

Benjamín: And just who will I be telling? You know I can keep a secret.

Enzo: Well… I don’t know, I feel like I’ve been doing well. I’ve never been in the bottom, I got called first and won the challenge a while back… everything seems to be going well!

Enzo: Hmm… I guess I just miss you. I miss our kids, I miss being somewhere where I feel like everything isn’t a race to grab some recognition.

Benjamín: Babe, you knew that you’d be getting into this when you signed up. In fact, your whole career is about going out there and getting opportunities that other people want. You’re good at this! You’re strong!

Enzo: You really think so?

Benjamín: Oh, I know so. Why do you think I married you? Just so I could tell other people that I’m a model’s husband? Hell no! You’re a beautiful, smart, and capable man. You have so much to give and I’m so proud when I see you on my TV. I was thrilled when I got the call from the producers telling me that Jessie suggested I come.

Enzo: Jessie suggested that you come here? For me?

Benjamín: Yeah, apparently she did! She thought it’d be a nice surprise. 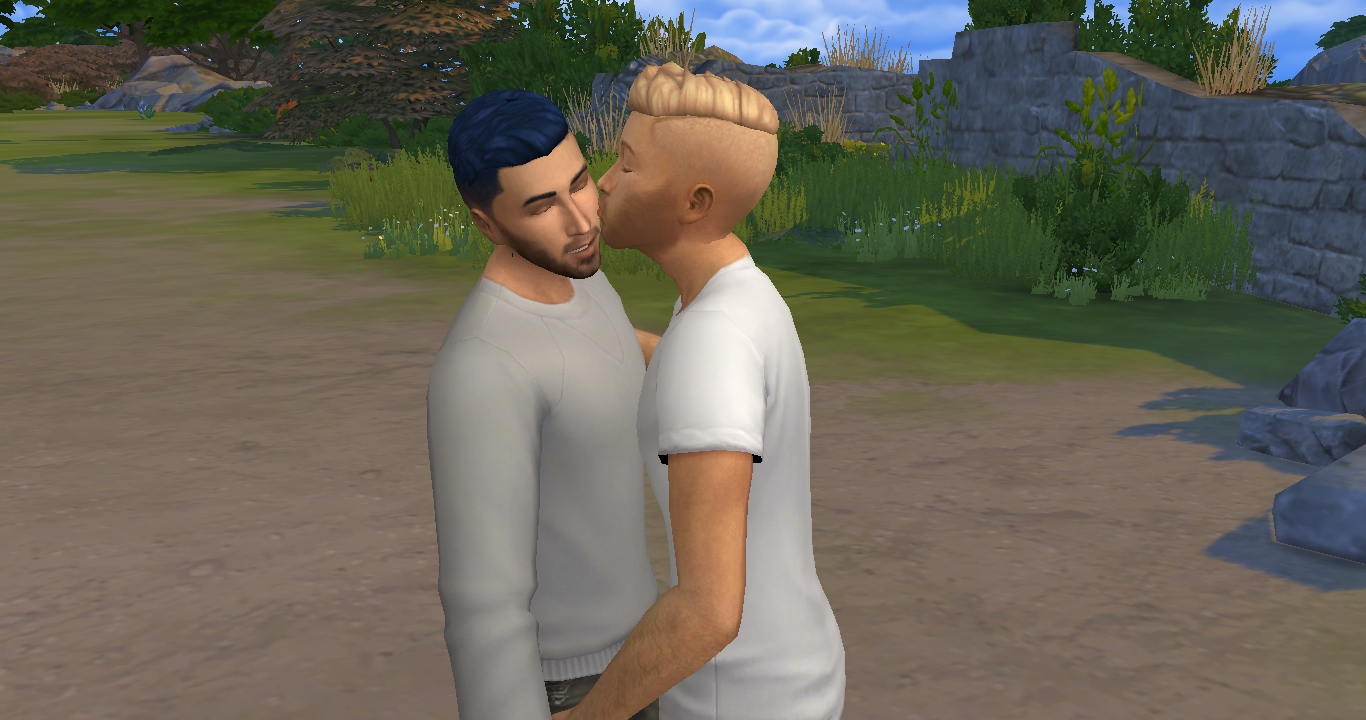 Enzo: You know, you came at the right time. I’m so, so happy to see you.

Benjamín: That’s me, showing up at just the right moments.

Enzo: I miss you every day. 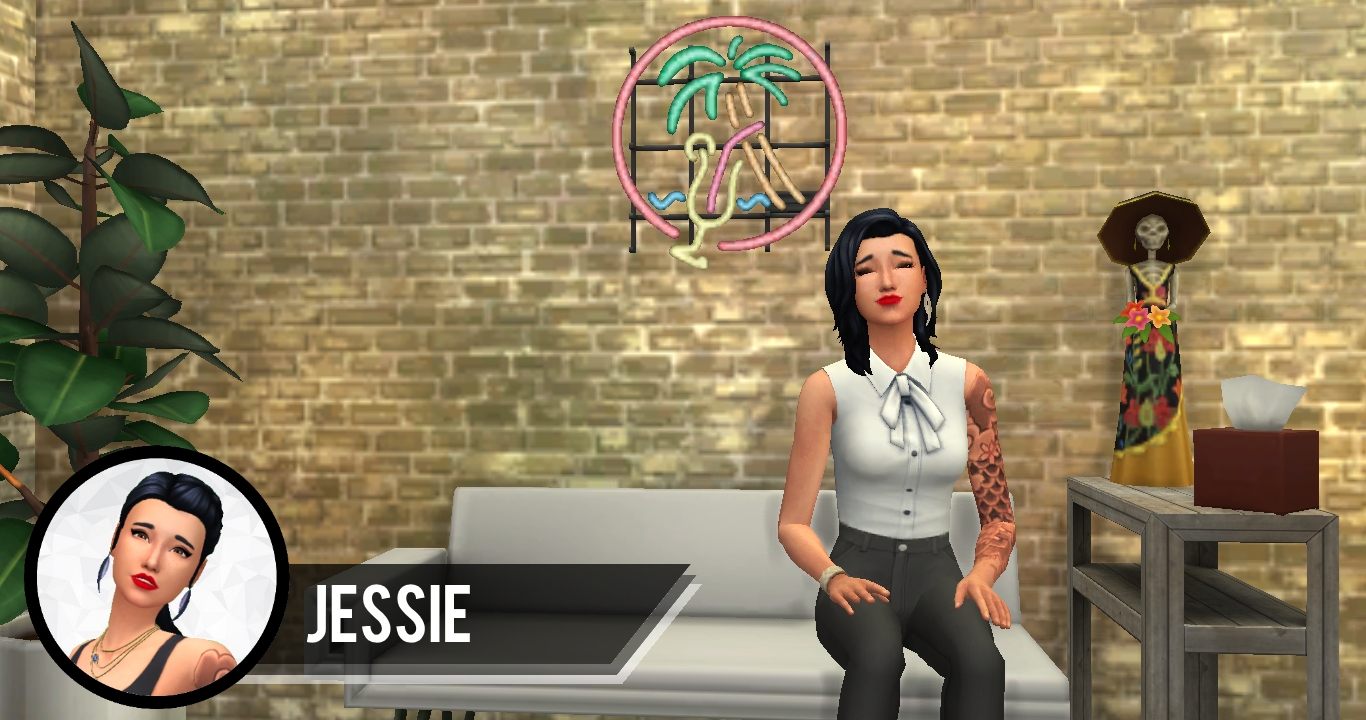 Jessie: Yeah, I know I came off as sneaky last week, helping the producers choose the most dramatic guests. I’m probaby not the most popular person right now, and that’s OK, but I just wanted to give Enzo a pleasant surprise, since I know he’s been down and because he’s been a good friend to me. I hope he enjoyed it!

Enzo spends the afternoon with his husband, holding his hand while he shows him around the house. Elsewhere, three of the ladies lounge by the pool, sharing gossip about what’s happened recently. Marjan seems to be buzzing after the last challenge, and Jessie and Kyungri listen to her speak, fascinated. 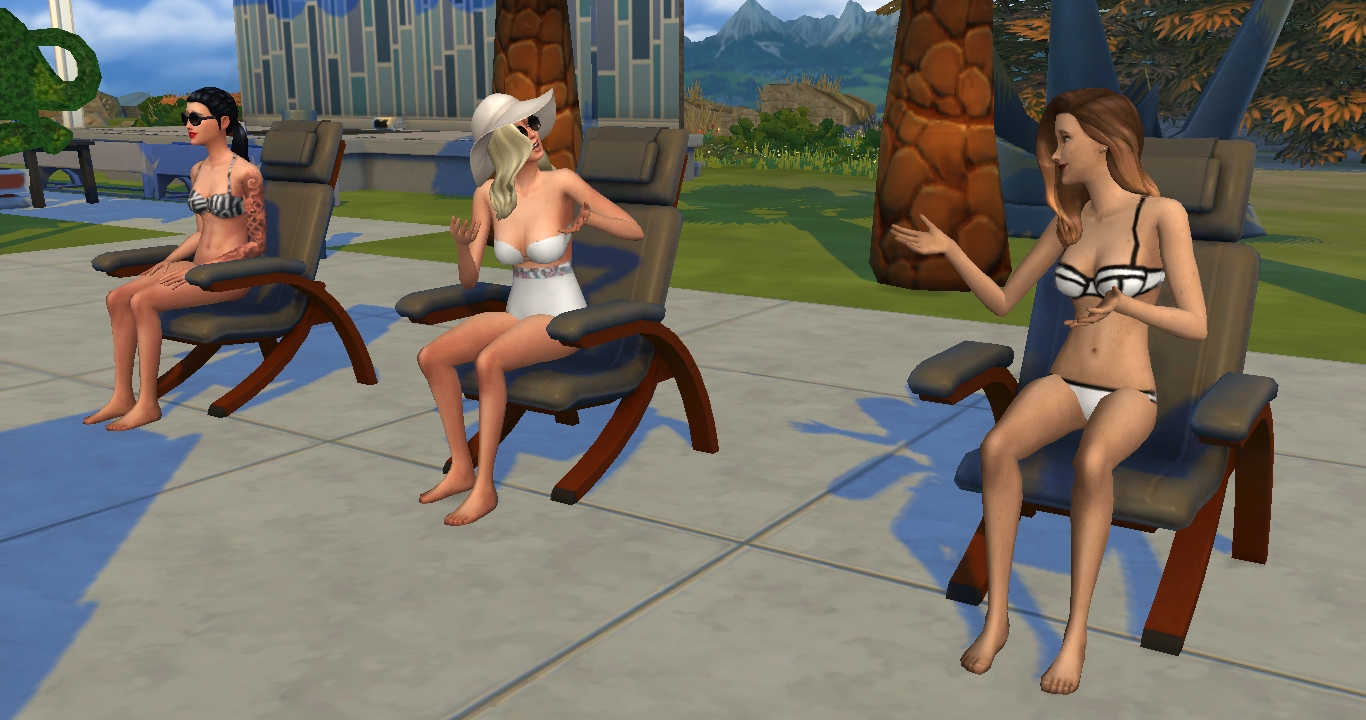 Kyungri: So you were saying that Aurora is your best friend? That’s lovely! Keep your friends close, girl, because you never know when you’ll need a well-manicured hand.

Marjan: Have you seen her hands though? They’re perfect! She hasn’t worked a day in her life, she gets all her money from her dad!

Kyungri: …it was an expression, but OK.

Marjan: And yeah, she’s my best friend. Sometimes I feel like she’s my owner, and I’m her little doggy, but prettier. You know what I mean?

Marjan: Oh, have you noticed the little ladybugs on the ground? They’re scurrying around as if their husbandbugs burned the dinner! 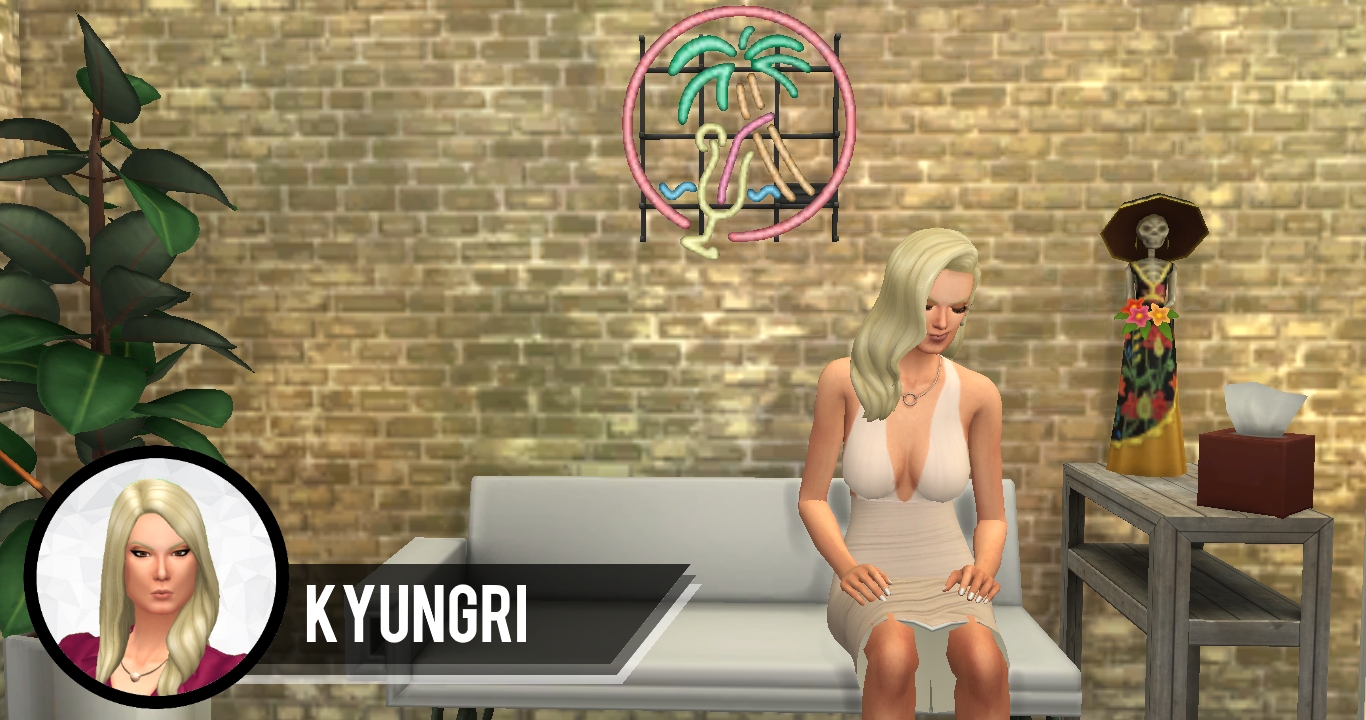 Kyungri: I swear. You get a little out of this girl and then she reverts back into her bimbo shell. I want to say that I’m going to crack that nut, but honestly, who has the time?

Also by the pool are Enca and Matthieu, talking about what happened last week, as well. Enca is animated, brimming with excitement about the possibilities ahead. Her breakup with Patricio has woken her up, it seems, and she shares this with Matthieu. 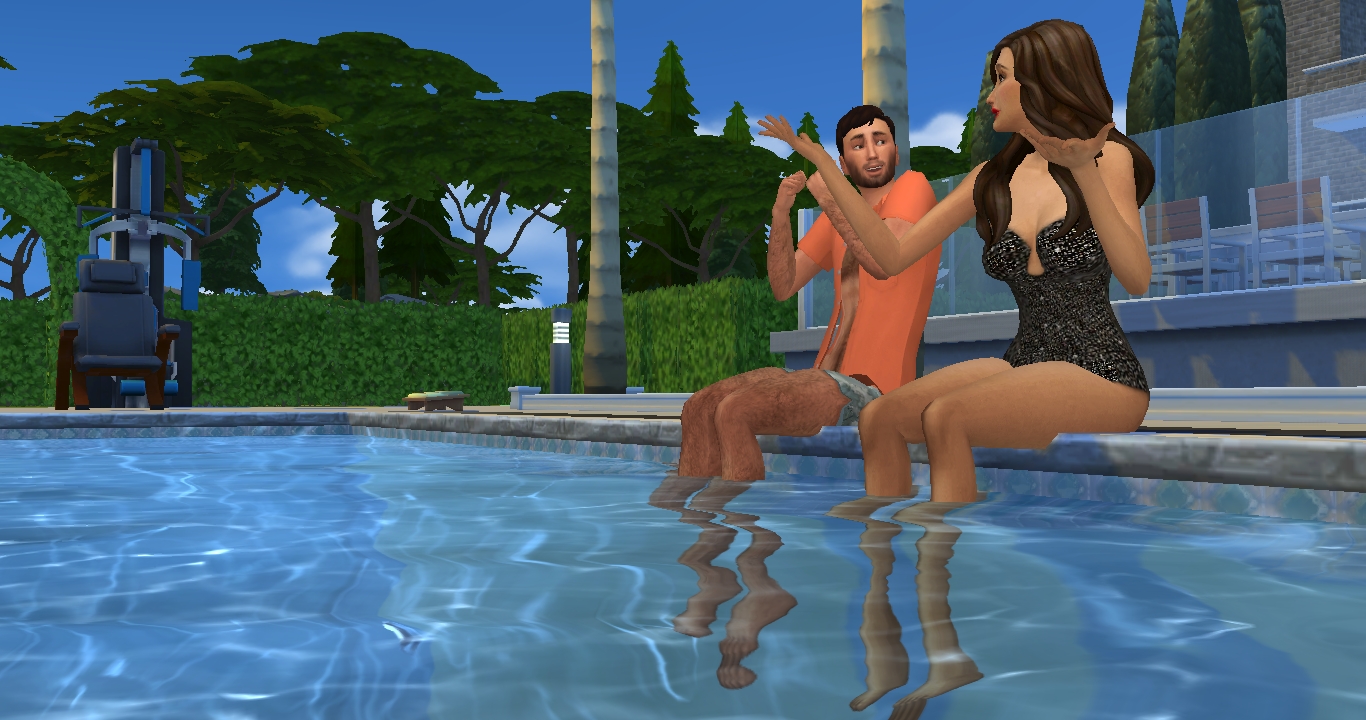 Enca: It’s just incredible, I feel so much better about everything! Here I was, thinking that I was going to be trapped with that freeloader just because I thought I was in love!

Matthieu: It’s important to listen to yourself, and I’m happy that you’ve been able to move past that period of your life. It’s great news!

Enca: I won’t ever let anyone take advantage of me like that. This is truly the new dawn of Enca, Queen of the Peaches! 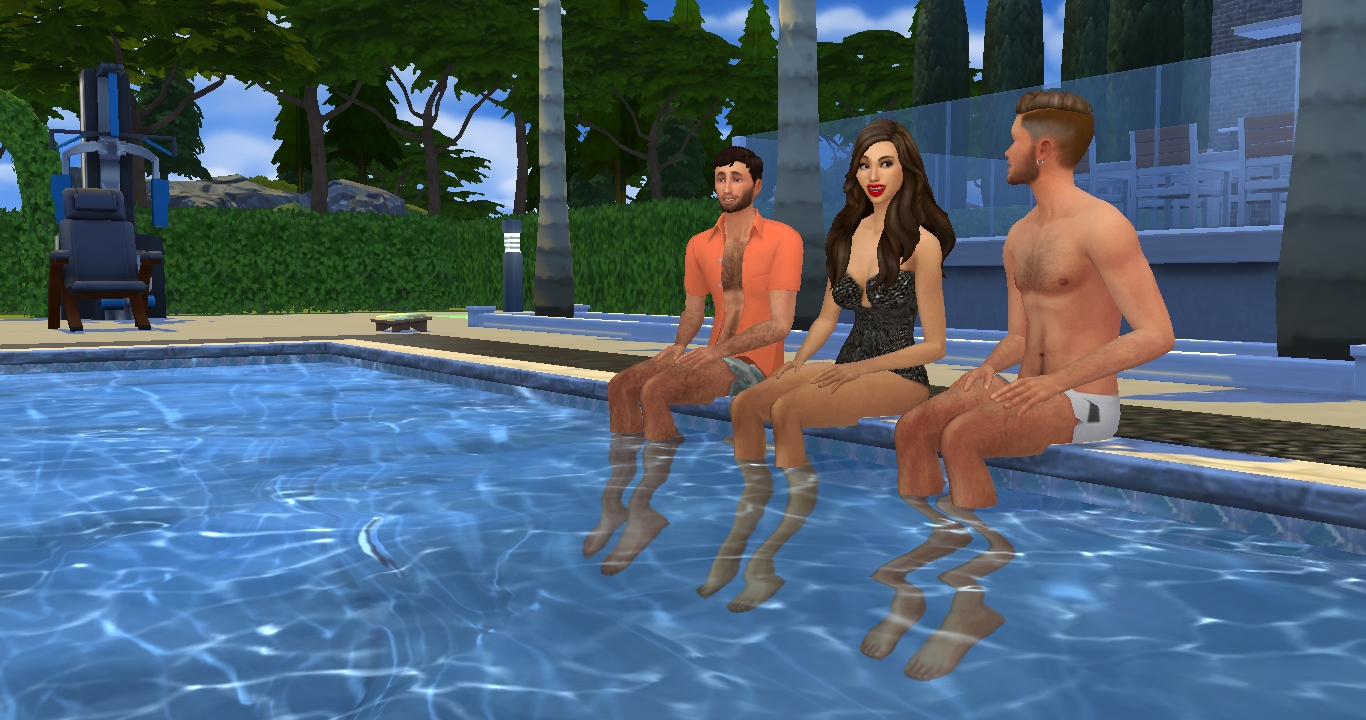 Harrison: Hey you two, do you mind if I join?

Matthieu: Not at all, handsome! Please do.

Harrison: Thanks! So what are you two talking about? Enjoying this day off?

Enca: Oh, well, I was just telling your man here *Harrison blushes* that I’m not going to hold anything back anymore. I’m here to win everything, and now that I’m free of the deadweight, I’m all or nothing!

Harrison: That’s great, Enca! I’ll be rooting for you!

Matthieu: And not for me? *winks* *Harrison blushes again*

Enca: Soooo, I love hearing you praise me as a goddess should be, but I want to hear all about you. I’ve heard that you’ve been getting hot and heavy all over the place!

Enca: I’m so thrilled for you two. Will I be singing at the wedding? 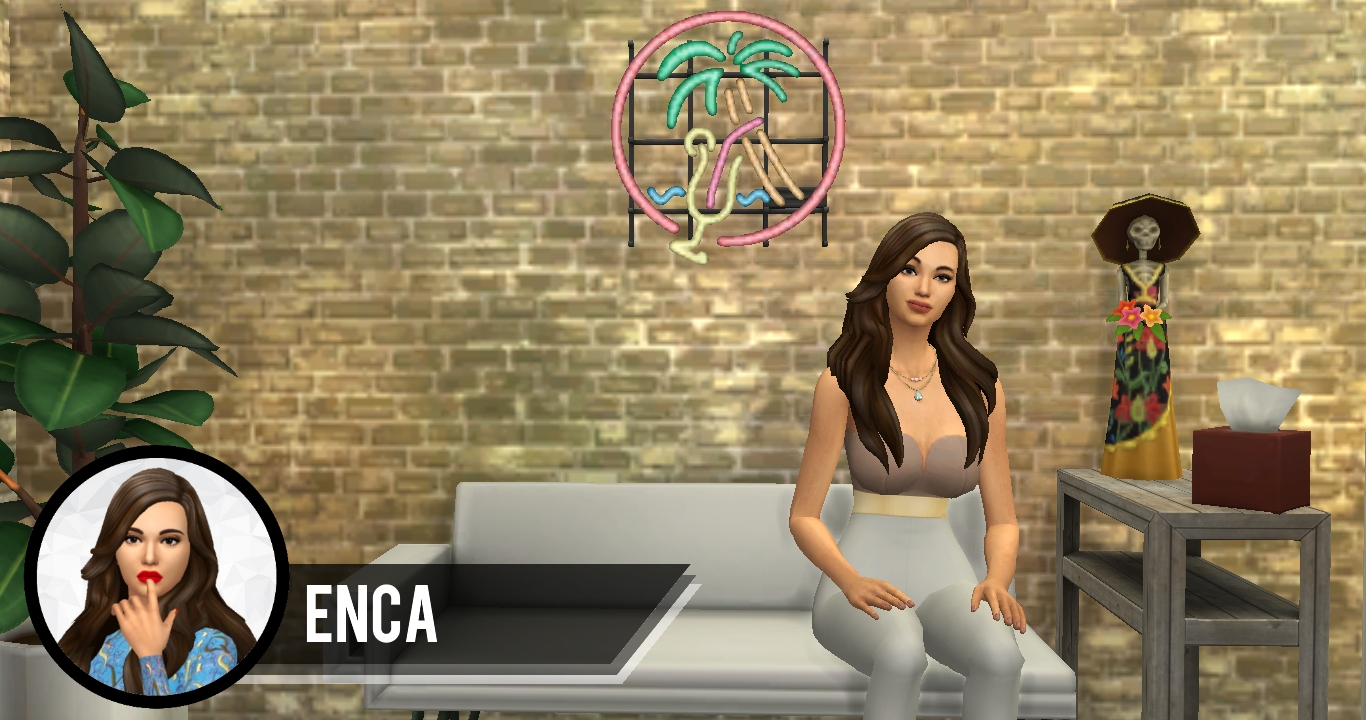 Enca: I love teasing Harrison. He’s told me all about what’s happening, and I’ve really loved getting close to him; he’s like a brother, and there’s nothing better than teasing your siblings mercilessly, right? Anyway, I feel so cheerful because this week is definitely my time to shine. I even got a message from ajmkv himself when I went back inside! I knew that I was his favorite.