Previously, on K&GI: The remaining housemates were shocked when the eliminated contestants returned for a chance to re-enter the competition. Old rivalries were revisited, buried romances bloomed once more, and a roast challenge had everyone nervous about the outcome. After many laughs and more than one cringeworthy performance, China won the comeback and returned to the competition, and took on Kyungri for the challenge win. However, Kyungri was on fire and had everyone in stitches, so she snatched the win. In the house, China turned down an opportunity to rekindle her romance with Gabriel after she saw the tension between him and Louise, and the weird vibes rippled through the house. However, Gabriel finally reciprocated Louise’s affections and the two began their own romance. At the elimination, Marjan, Jessie, and Matthieu were in the Bottom 3 but Marjan once more proved that she is a firm favorite by winning the vote. Matthieu and Jessie, who had been insecure about their respective positions in the competition, faced a shock when they were both sent home in the first ever double elimination on K&GI, bringing an end to #Matthison and leaving Harrison devastated to see his man go home. Only six contestants remain; who will be sent home next?

It’s a new week and the housemates nervously await their next challenge. But as the cameras continue to roll, it is apparent that our host, ajmkv, is feeling blue. He’s been moping after the elimination, and some of the contestants have started to notice. 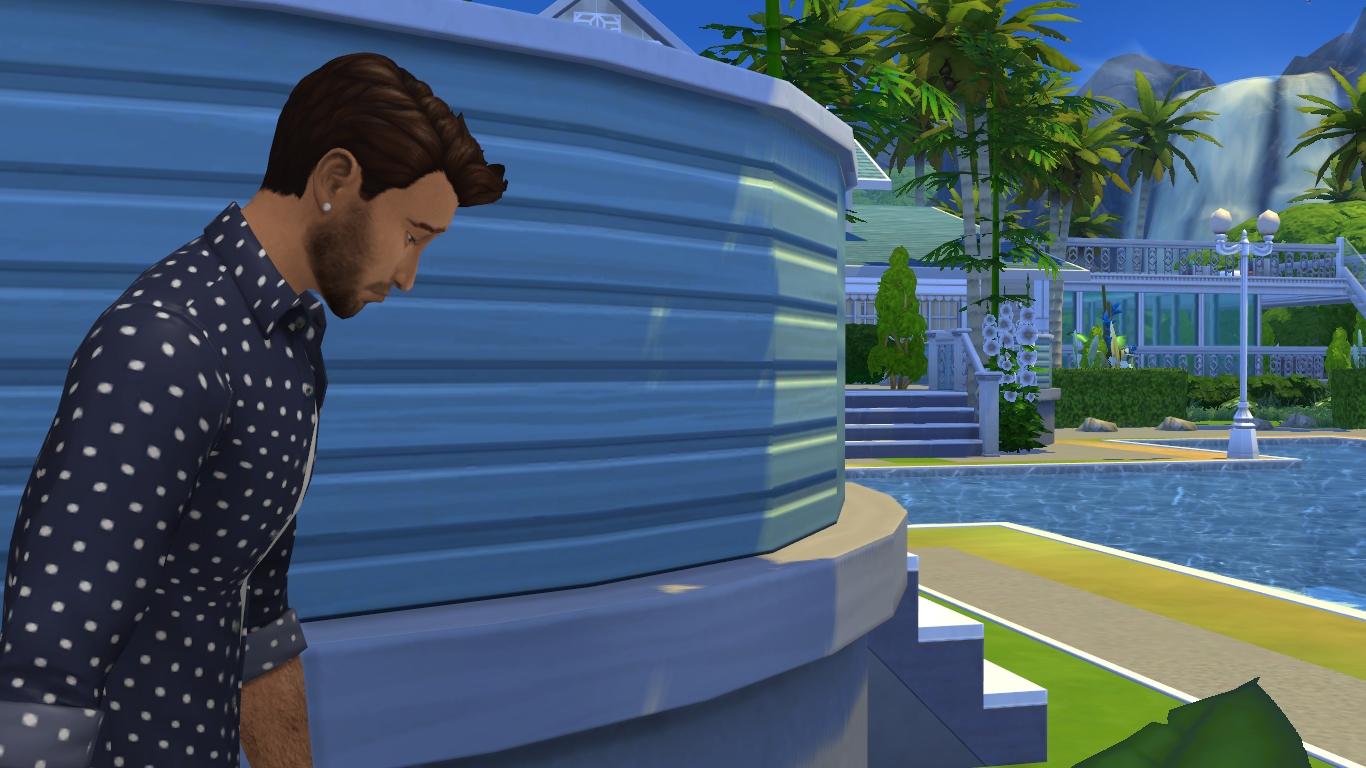 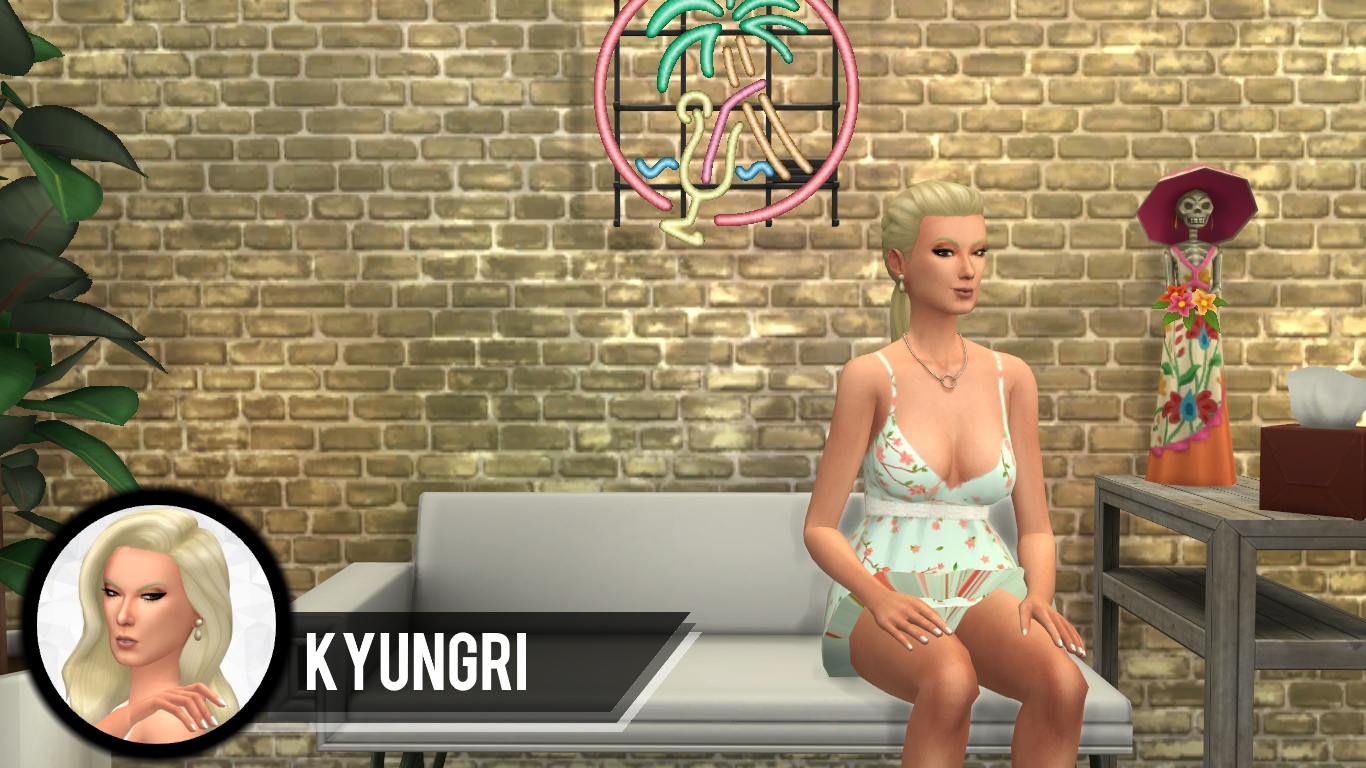 Kyungri: If you ask me, ajmkv’s just sad about his cash cow coming to an untimely demise. What kind of cute fluff is he going to push now that Matthison has been separated? I would also be depressed if I had just seen my major source of income go home. Business recognizes business! But honestly, I’m kind of over his moping around, he’s just been hanging around the house and I feel strange knowing he’s here…

And indeed, he hasn’t left the villa since the elimination, going around and cleaning multiple surfaces around the building. The contestants mostly avoid him, though, and eventually he goes home, leaving the house sparkling. 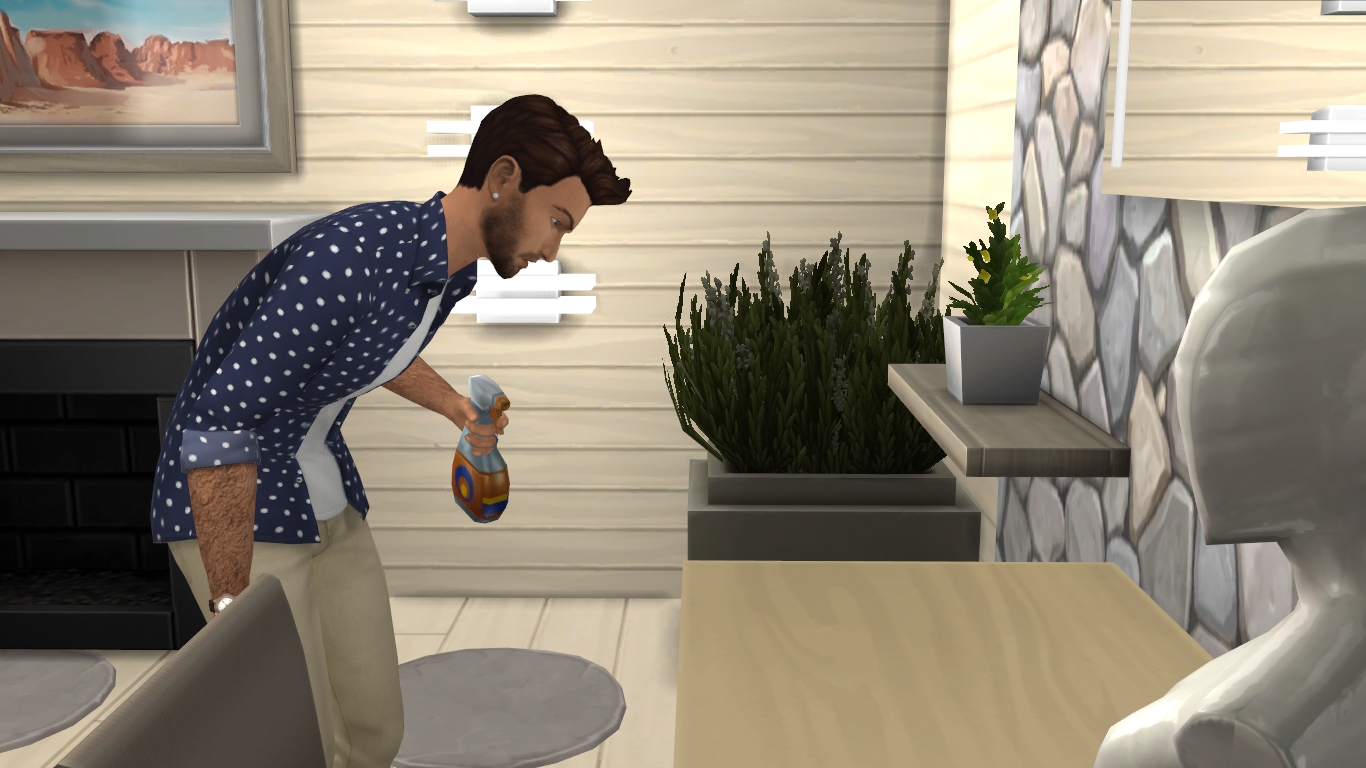 Late that night, while most of the housemates are already sleeping, Marjan sneaks out of her bedroom for a walk. She walks around the whole lot, lost in her thoughts as she looks up at the stars. When she walks back inside, she almost goes back into her bedroom, but something catches her eye as she walks past a window, and she stops, gazing intently out over the garden. Kyungri, who had heard her walking around, comes out of her room and walks toward her. Marjan initially seems unnerved about the interruption. 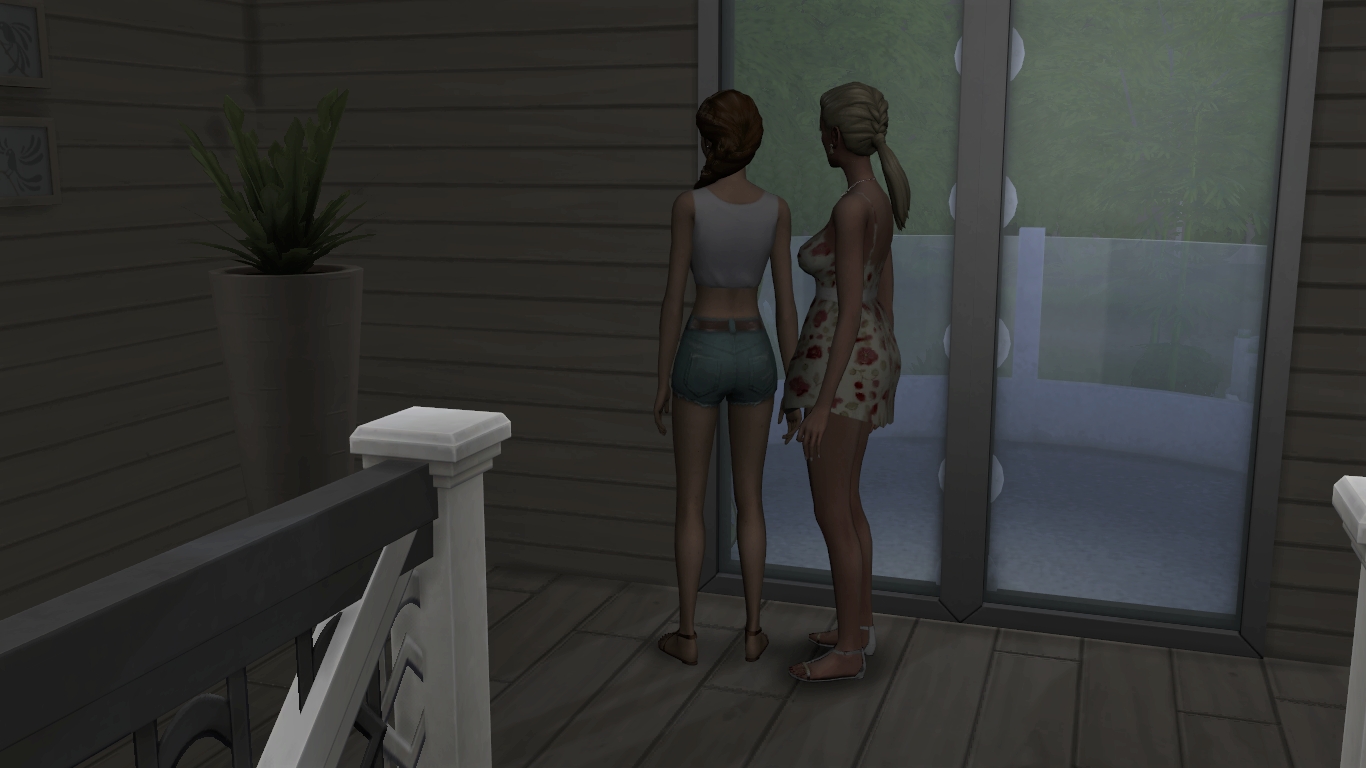 Kyungri: Marjan, what are you doing? You’ve been walking around for a long time now.

Marjan: I’ve just been… lost in my thoughts. You know how it happens, like when a butterfly loses its head while sucking up sweet nectar from a flower, right?

Kyungri: *shakes her head in exasperation* Enough of this talk! I cannot and will not believe that this is how you really are every day of your life! What is going on with you?

Marjan: *uncharacteristically somber* A woman’s heart hides many secrets in its murky depths… 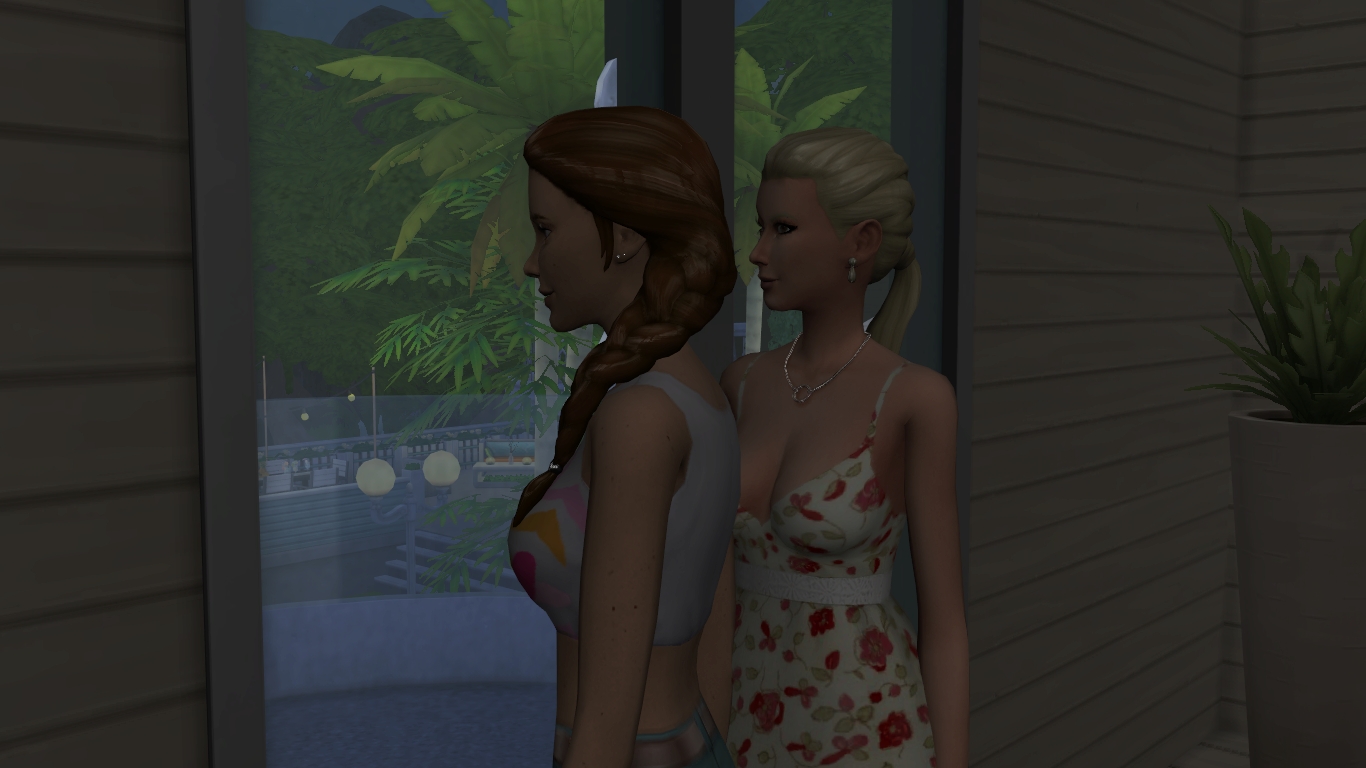 Kyungri: *softly* Marjan, I don’t want to make you feel uncomfortable or anything, but I’ve grown to… grudgingly tolerate you over the course of this competition. I don’t want to presume to know you better than I do, but I sense that you’re hiding something more serious than we all think.

Marjan: And what makes you so sure of that?

Kyungri: I also hide many things from the world, you know. I can tell when someone else is being inauthentic because I’ve had to be like that for a lot of my life, too.

Marjan: I don’t think you could ever understand what pushes me forward, though… *her face contorts into an unreadable mask for a couple seconds* No, you never could. 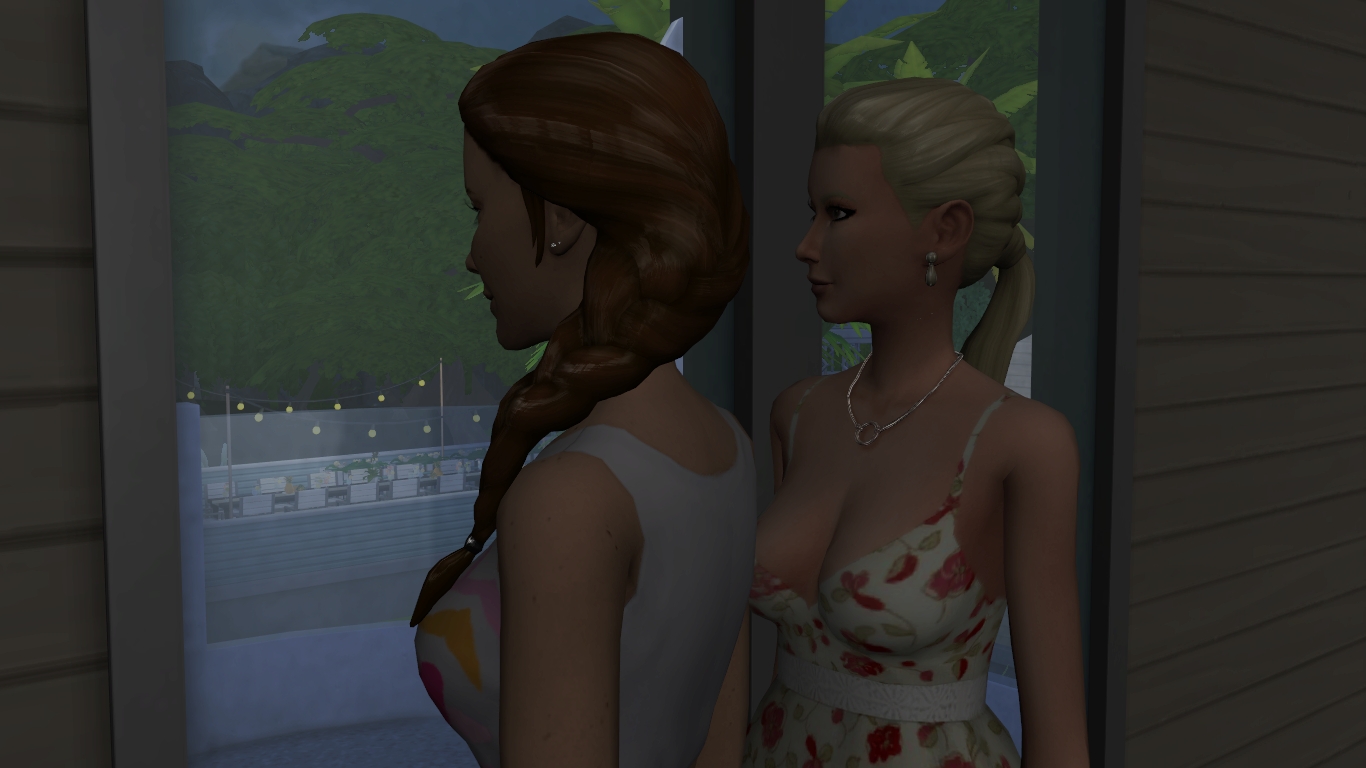 Marjan: I decided a long time ago that not everything is as bright as I want to make it seem, but… it’s still hard. They’re still everywhere.

Kyungri: Who? Marjan, who are you talking about?

Marjan: Maybe someday I’ll tell you. In the meantime, though… *her entire demeanor changes* It’s time for bed, don’t you think? I’m sure tomorrow’s challenge is going to be harder than a beetle in a desert and sillier than a turtle in church! Goodnight, Kyungri!

Marjan hugs her quickly, and though she doesn’t say anything, she gives Kyungri a meaningful look. Kyungri is surprised and stays in the hallway a little longer, looking out the window. She thinks she sees some movement in the bushes, but she shakes her head, thinking that Marjan is just getting to her, and she finally also heads to bed. 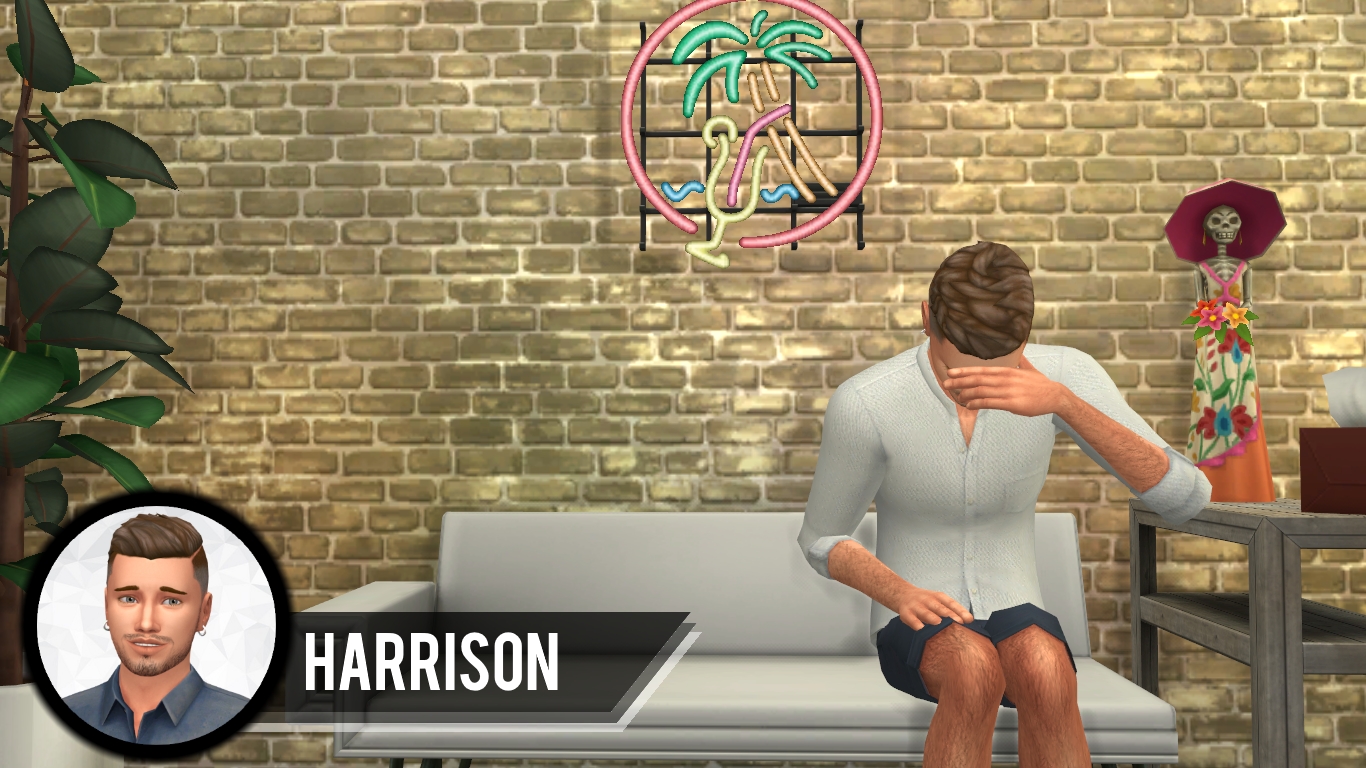 Harrison: *sniffs* It’s a new day and Matthieu is gone… We saw each other every day for two months! I know we’re going to see each other again really soon after this, but I’m just so… insecure without him. He really helped me come out of my shell a bit, and now that he’s not here… I just don’t know. He wouldn’t want me to be sad, but I can’t help it. *a tear rolls down his cheek and he hides his face*

The contestants gather in the living room, where a much brighter-looking ajmkv greets them and invites them to sit down. Marjan and Kyungri glance at each other, but quickly look away. Louise, Gabriel, and China all look well-rested, but there is a look of annoyance in China’s eyes as she sees Louise greet Gabriel with a kiss on the cheek. Harrison is sulking, looking down at his feet before ajmkv starts speaking. 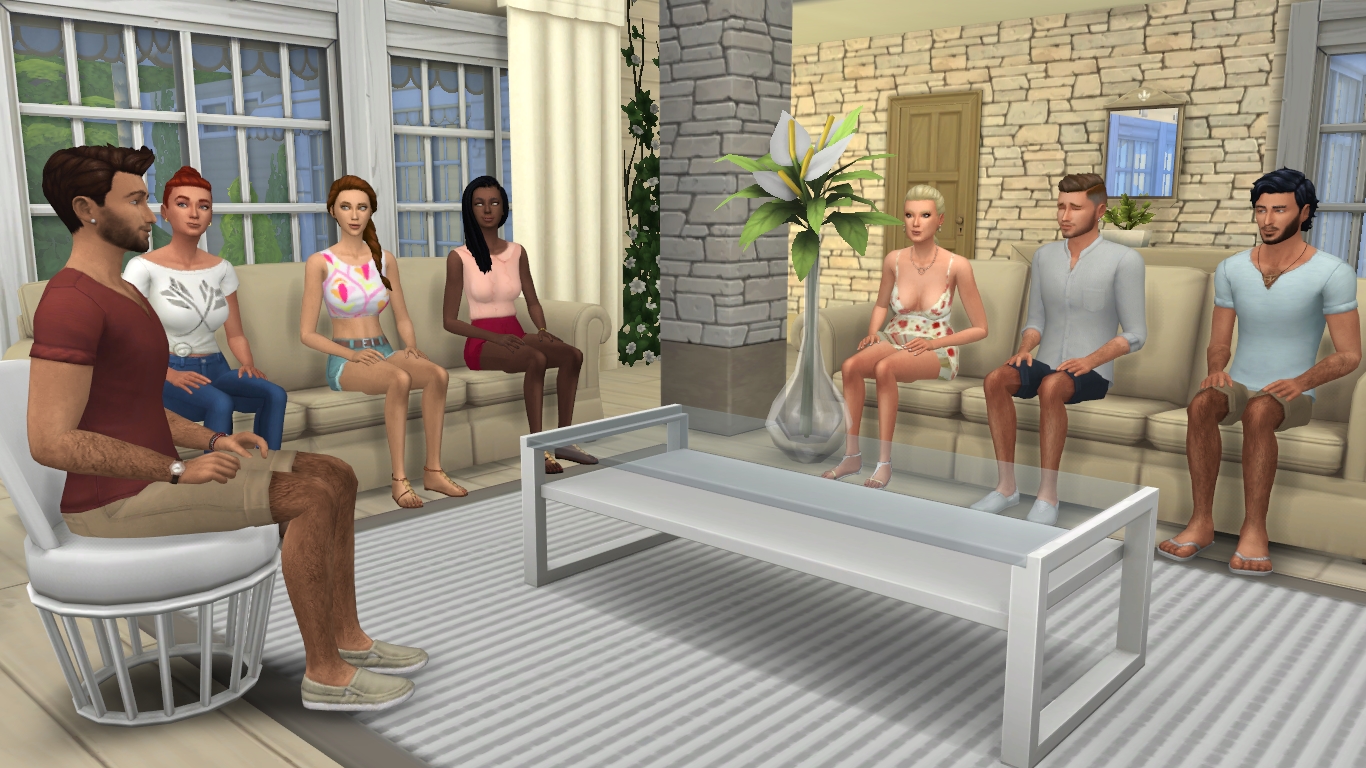 ajmkv: Hey, everyone! Welcome to week 10 of the competition! I can’t believe that only six of you are left, and soon we’ll have our Top 5. *China cheers* Yeah, that’s the spirit! I’m also really happy to announce that this week we’re going to have an incredible opportunity to branch out of our little show. Have you been tired of being yourselves during this whole time? Well, now you’re going to be able to put on another face for the cameras! 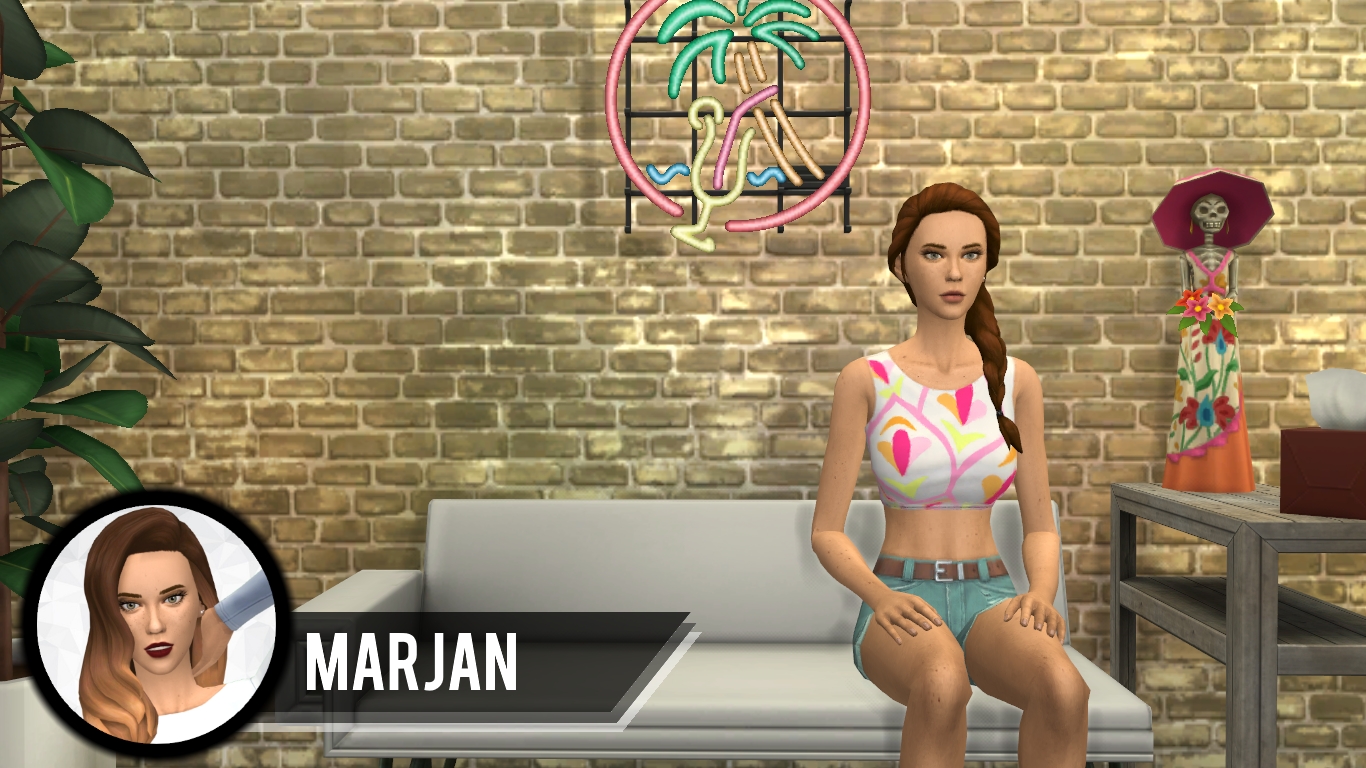 Marjan: Another one? I’m going to lose track…

ajmkv pauses. He looks down at his hands before he continues, visibly struggling to say something. The housemates look confused, and then concerned as they see that their host looks genuinely lost for words. 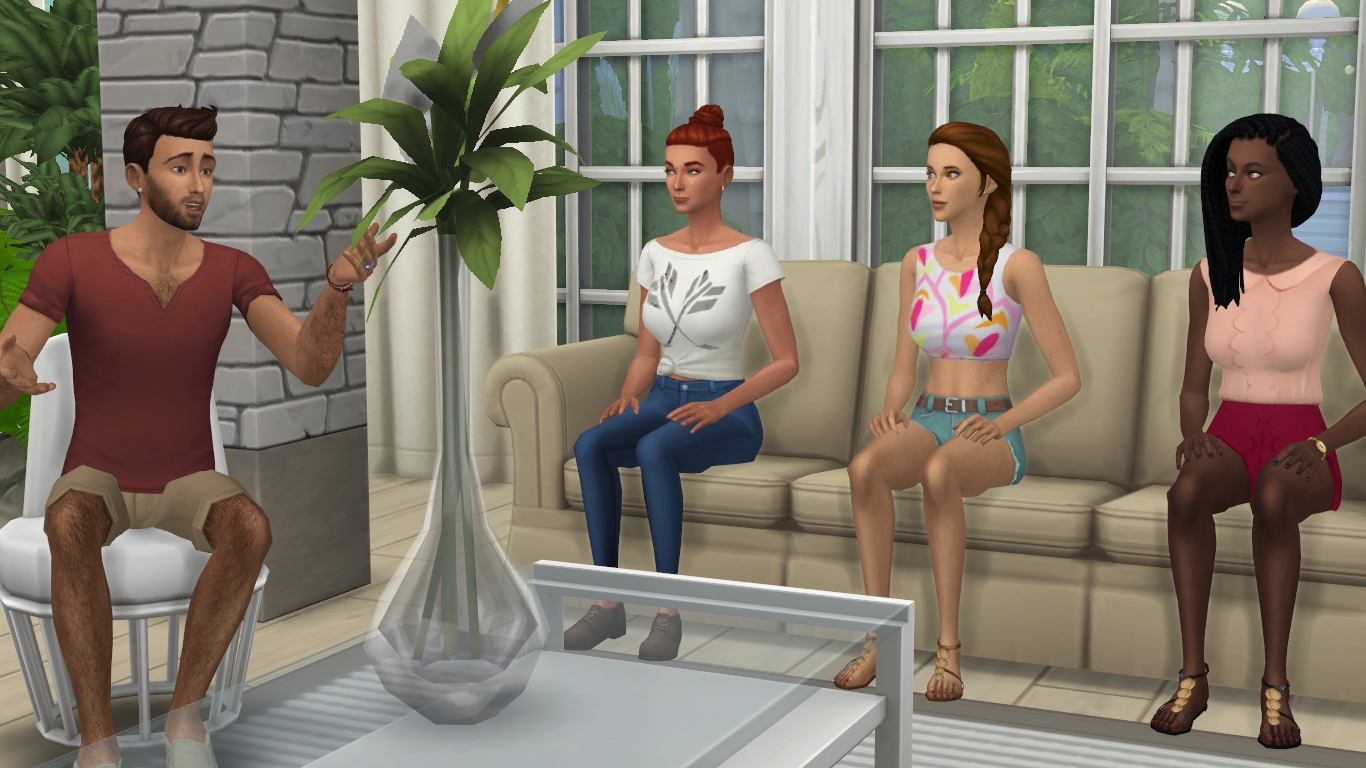 ajmkv: Listen, everyone. I just wanted to apologize for my strange behavior in the last few days. I’ve been going through a rough time at home, and it’s kind of spilled over into the show. The network has also allowed me to tell you that… the show was almost canceled…

China: Why? What was the reason?

ajmkv: Listen, let’s just say that we had some strange correspondence with a mysterious group of people that almost tanked our show. I won’t go into detail because I actually don’t know too much myself, but we’ve solved it for the moment.

Kyungri: What did they want?

ajmkv: Again, I can’t go too into detail, but I can tell you that after they agreed to let the show keep going, they sent out a message—

Marjan: The eagle is always watching. 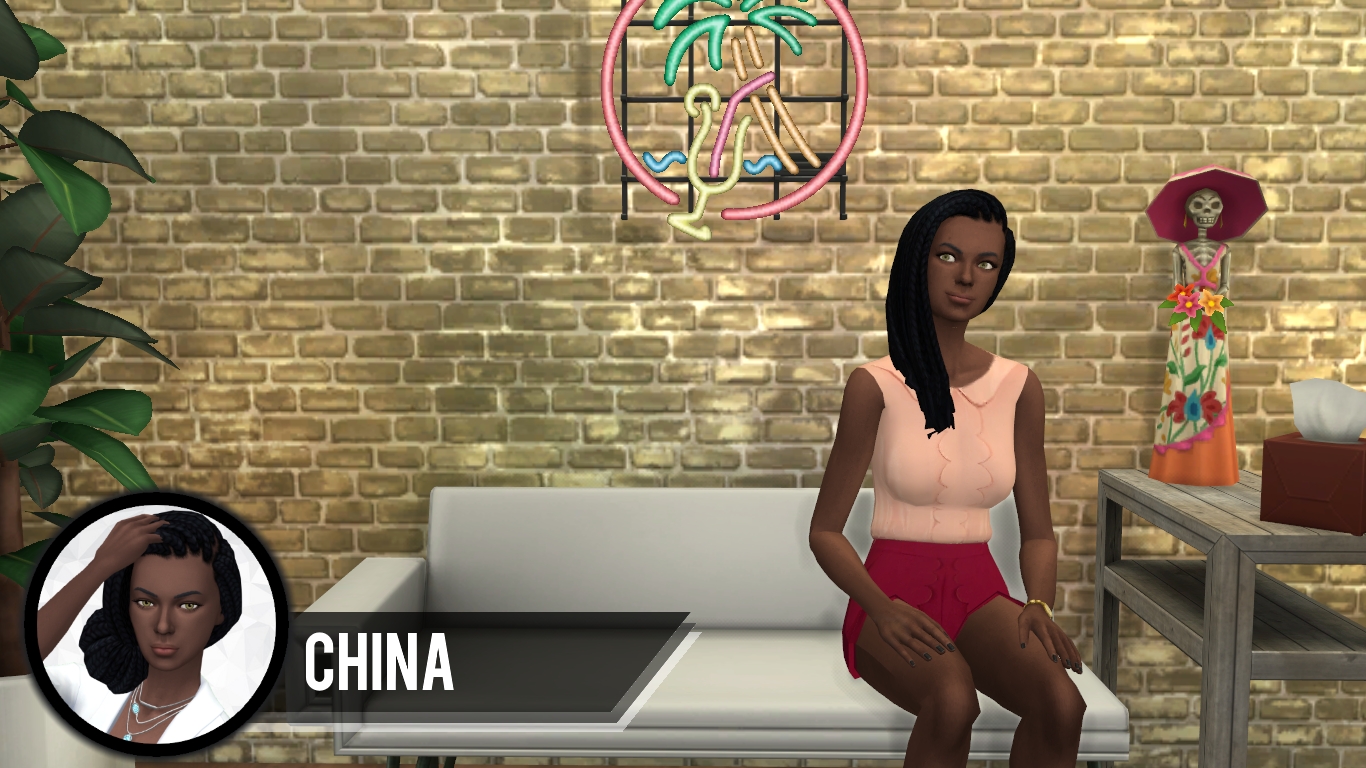 China: You could have heard a pin drop. Really, it was kind of creepy. My girl Marjan looked like she was in a trance, ajmkv looked thunderstruck, and none of the rest of us knew anything about anything. *laughs* It was such a weird moment! ajmkv changed the subject pretty quickly after that…

ajmkv glances at the cameras, nervous, but composes himself quickly and pretends nothing happened.

ajmkv: Anyway, now that that’s out of the way, let’s talk about the next fantastic challenge! As I said, we’re going to be busting out of our little show this week, as your task this week is to act in the pilot of a new TV show produced by SimTV! An actual scripted show, and you’re going to be the stars! 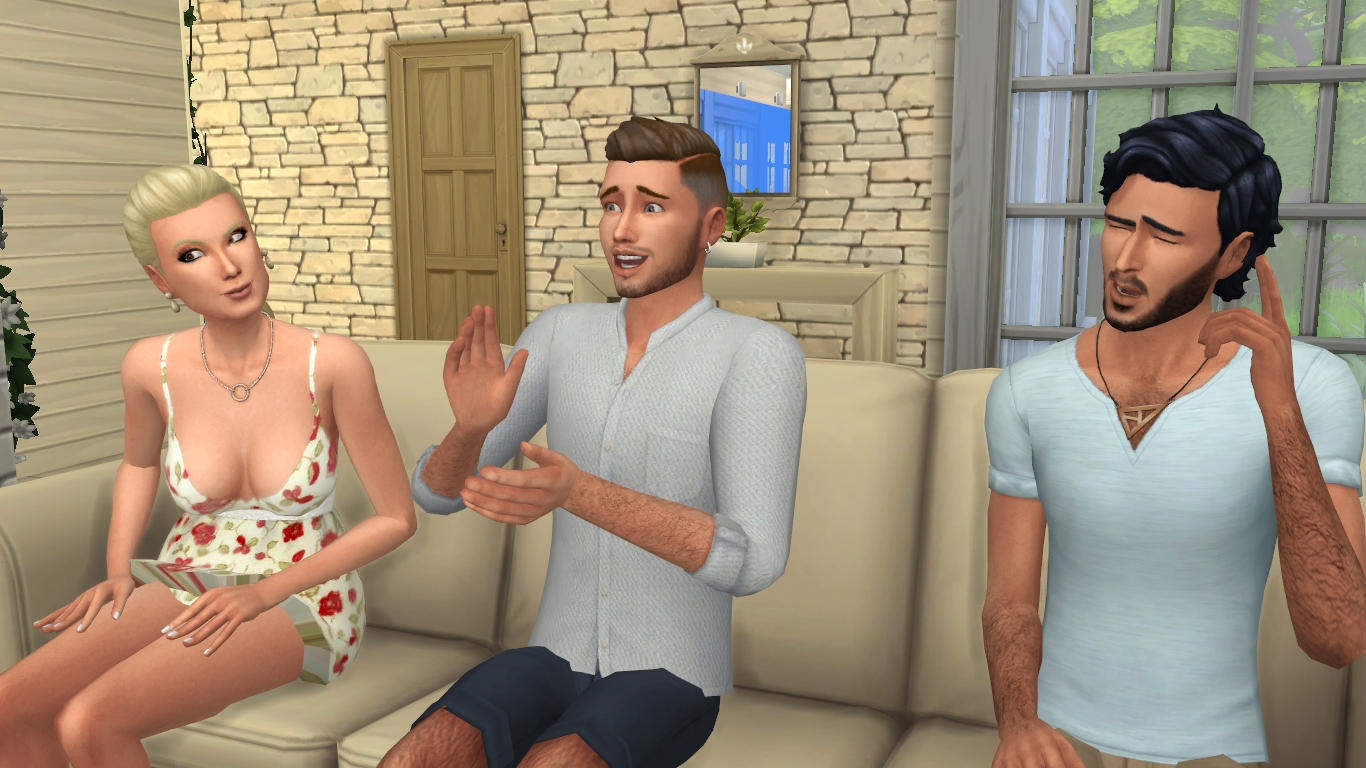 Kyungri: A TV show? On what channel? What’s the paycheck like?

Harrison: We’re going to be leaving this house for a while?

Gabriel: Are we actually signing contracts and everything?

ajmkv: Yes, yes, yes to everything! We’ve recently signed a new partnership deal with El Canal de Los Amores, and as a reward for y’all making it to Top 6, you’ve each won a main role on the upcoming masterpiece telenovela, Paloma De Pasiones!

Everyone looks surprised, and mostly pleased. ajmkv goes on to explain that the challenge will consist of acting in the scripted TV pilot of the telenovela, getting into character and really performing well in front of the camera. He also reiterates that if they choose to, each of the contestants will be able to keep their role on the show. He then explains each of the roles written for the show, not telling the housemates which character they’ll each be playing. 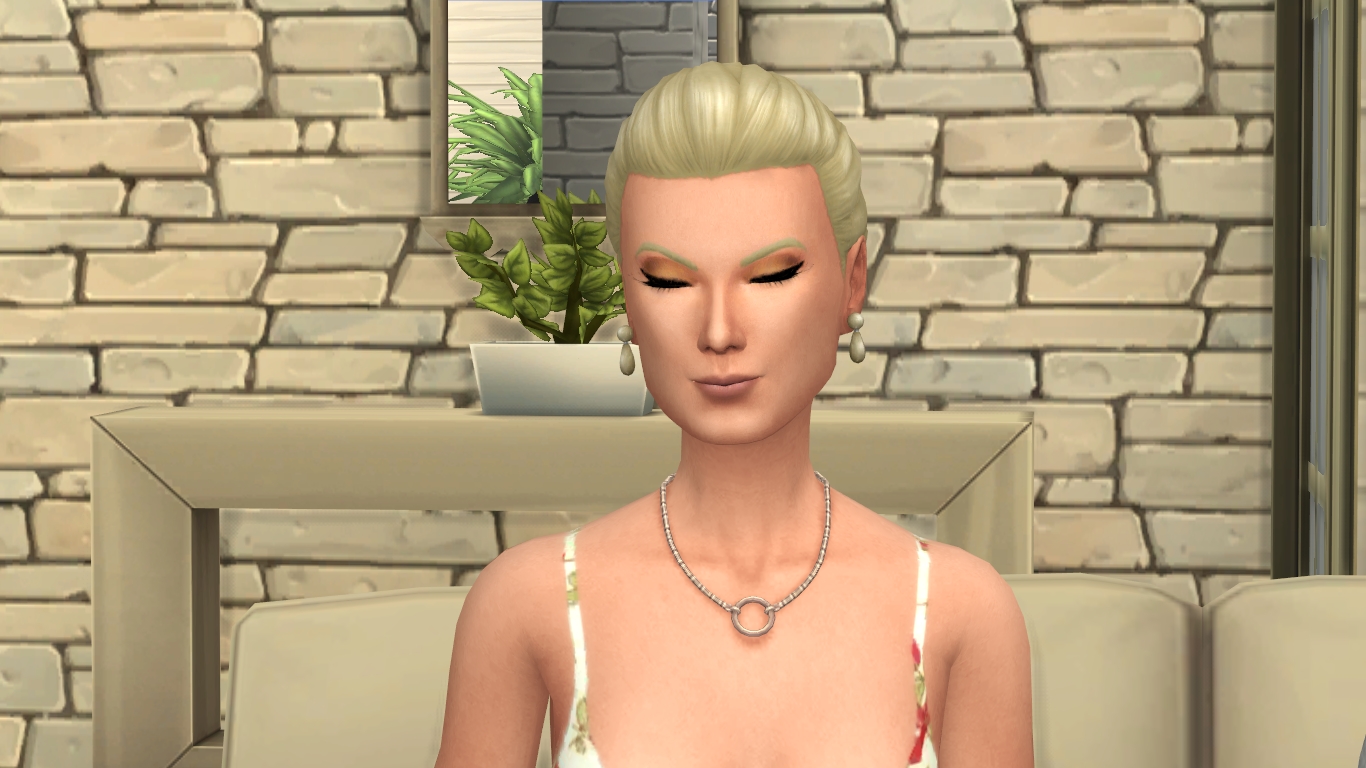 Kyungri: *voiceover* So the boys have the patriarch of the family, the bad boy, and the business partner, and we ladies have the rich daddy’s girl, the sexy secretary, the socialite wife, and the frumpy maid. I just know that I’ll be amazing in the role of the wife, there’s no way they haven’t cast me as that! I just feel it in my bones, this will be the role that will launch me into superstardom. Finally, a challenge that will make a difference!

ajmkv: And before I let you all go enjoy the rest of your day, here’s another piece of good news: the seventh member of the main cast of the show will be none other than our favorite K&GI winner, the original good guy and H-son… the winner of Season 1, Hudson! Hudson, get out here! 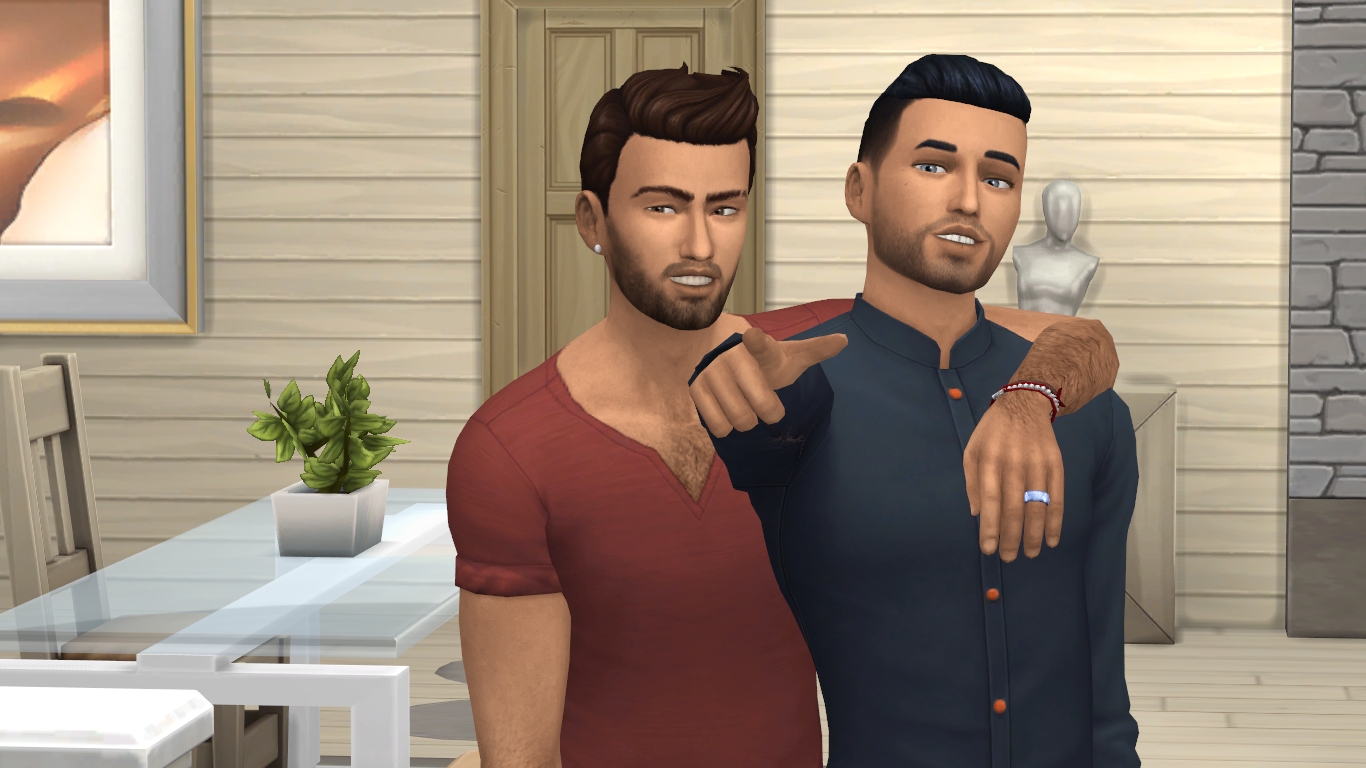 Hudson: Hey, everyone! You all surviving this mess?

ajmkv: Now, now, Hudson… you can’t even imagine what they’ve all gone through to get to this point. Luckily you’re here to share some insight into the life of a K&GI winner!

Hudson: That’s right! I’m sure you’re all tired and wishing you could just go home but you’re so close to the end, it’s all going to be worth it. I remember last year I wasn’t energized in the final stretch and it almost cost me the victory. Don’t let that happen to you! 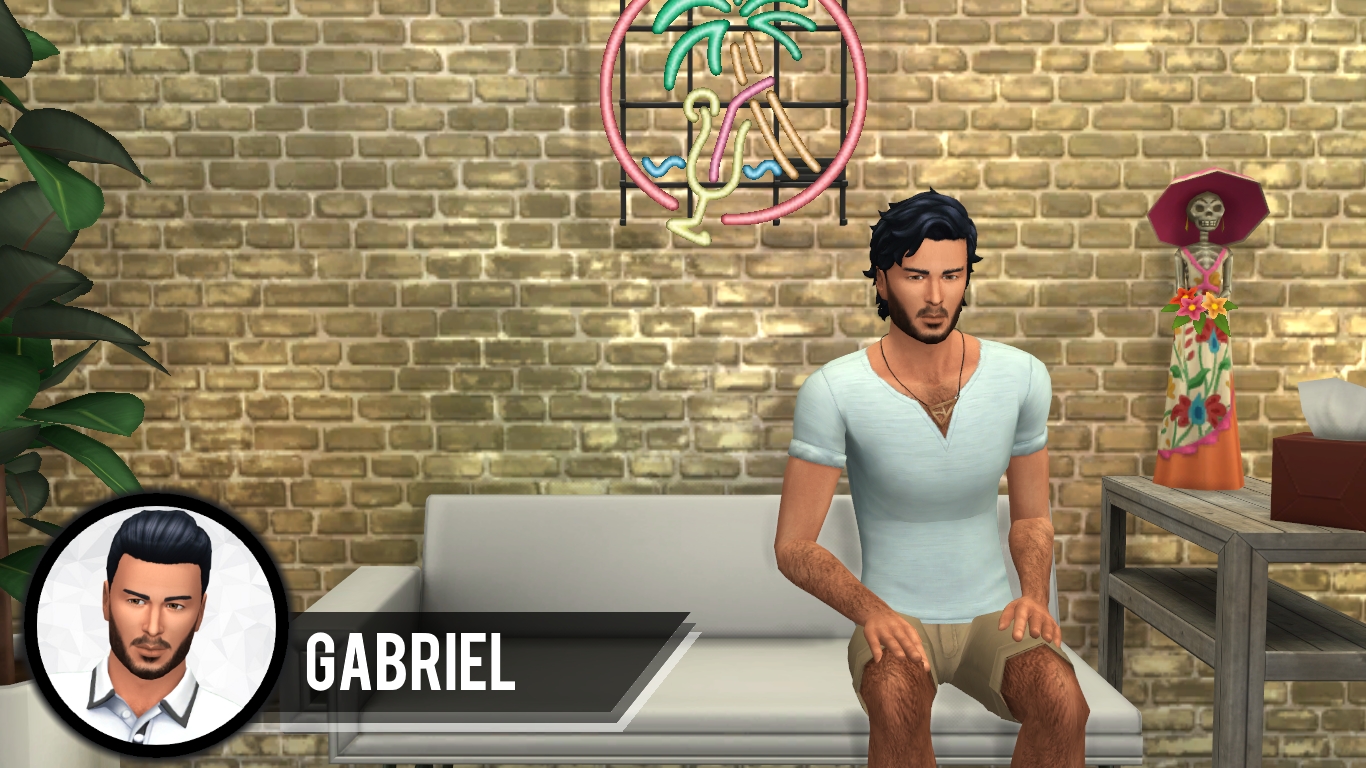 Gabriel: Blah, blah, whatever. It’s not like I’m going to let anything distract me from the competition. I’m a coach, I’m not one to be distracted from a prize! I feel like ajmkv just likes hearing Hudson speak, he kept asking him to give us advice when it was clear that Hudson was kind of over it, too. I like Hudson, he was a good winner. It is good to see him and remember that one of us will be taking his spot!

Hudson and ajmkv bring out scripts and send the contestants off for a few hours of memorization before they have to get ready. Though they don’t know what roles they have yet, the contestants pair up and go to different parts of the house to practice, but they all have different things on their minds…