Late that afternoon, the contestants gather to practice their lines together. Everyone’s in a good mood, and the rehearsal quickly turns into a lively chat. Each of the contestants seems to really like the others, and this is noticeable in their interactions. Kyungri and Harrison are sitting close to each other, laughing at Gabriel’s jokes, while Marjan looks calm for a change, sitting next to a jolly China. Gabriel has his arm around Louise, who looks pleased at the little show of attention. The hours stretch into the evening, and they’re still sitting there, enjoying the company and not worrying about the looming challenge and elimination. For a few hours, they’re just six friends sitting and having fun. 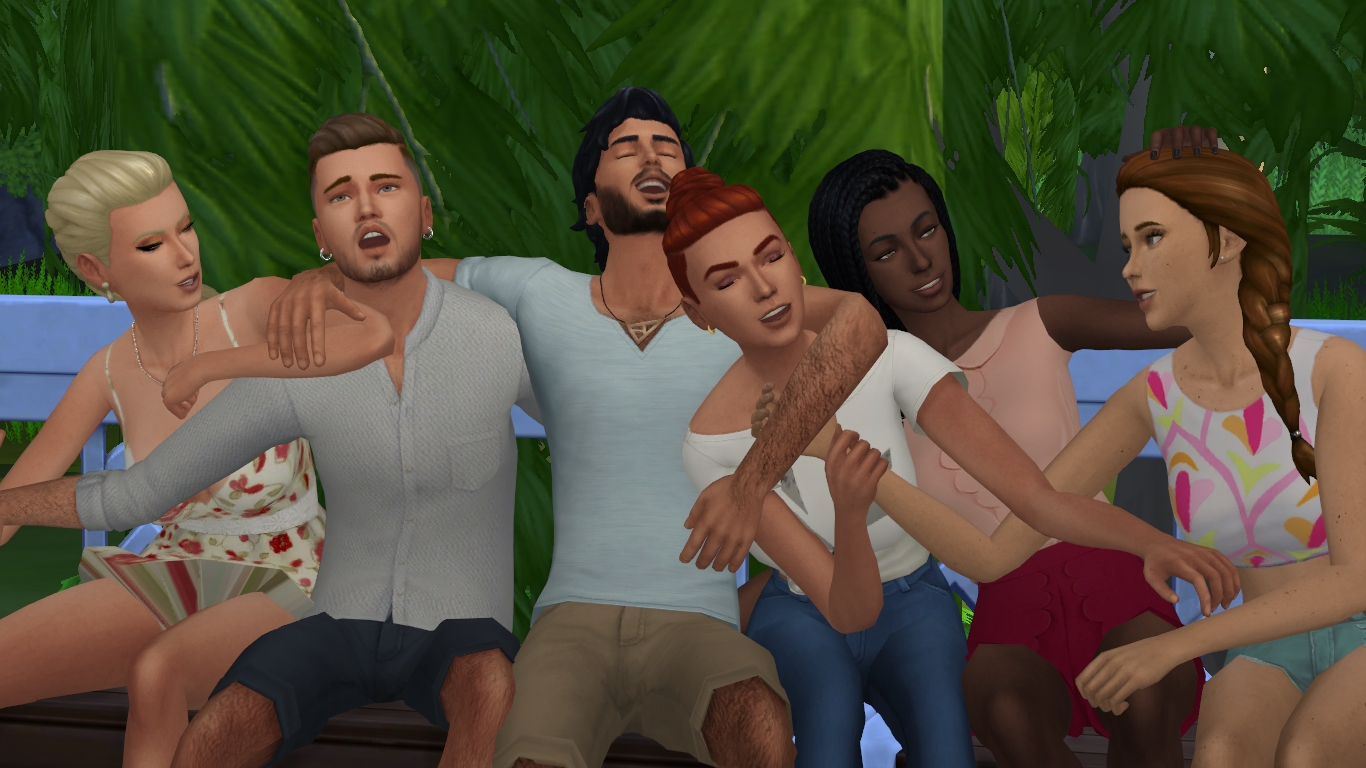 But the night is not over yet. 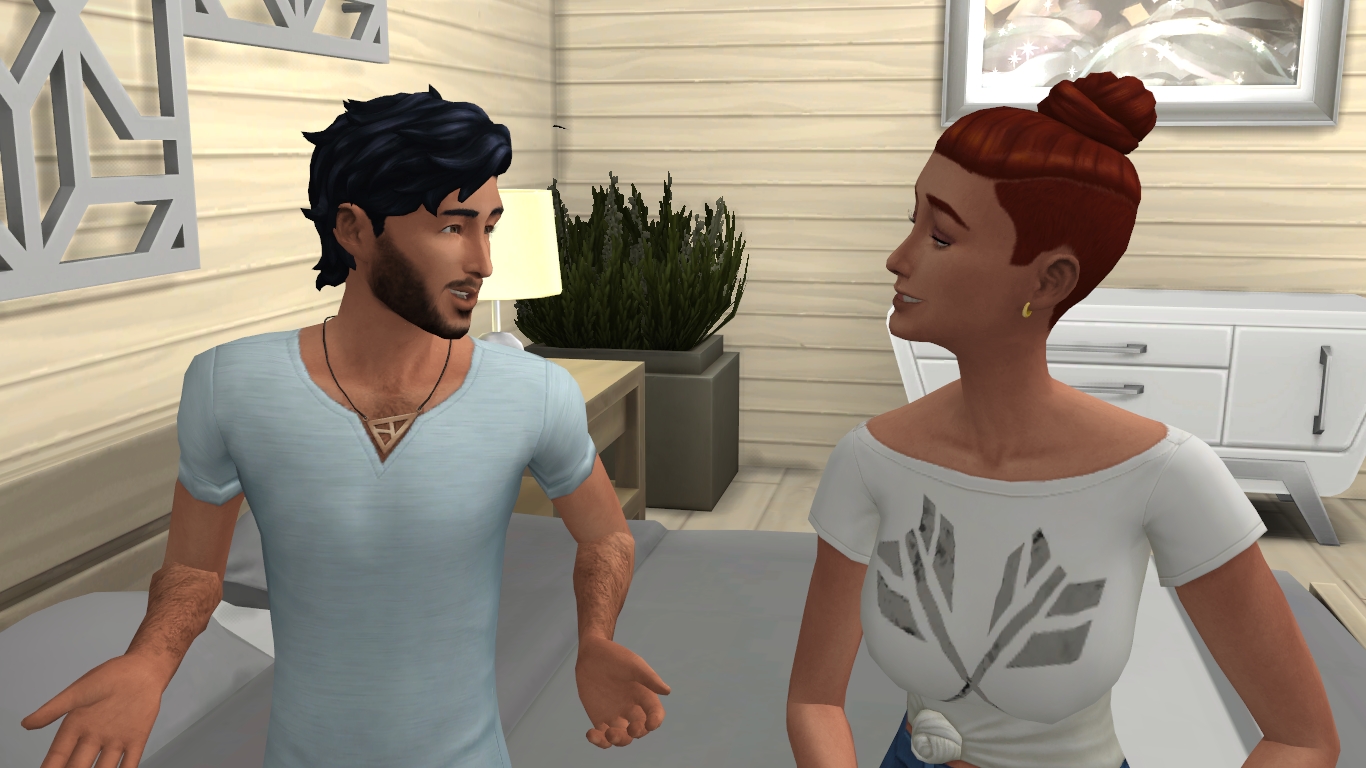 After dinner, Gabriel and Louise end up in his room. The other contestants saw them leave together and decided to quietly cancel the rehearsal they had planned for the night. The pair in Gabriel’s room had more important things to worry about and the other housemates weren’t about to bother them. 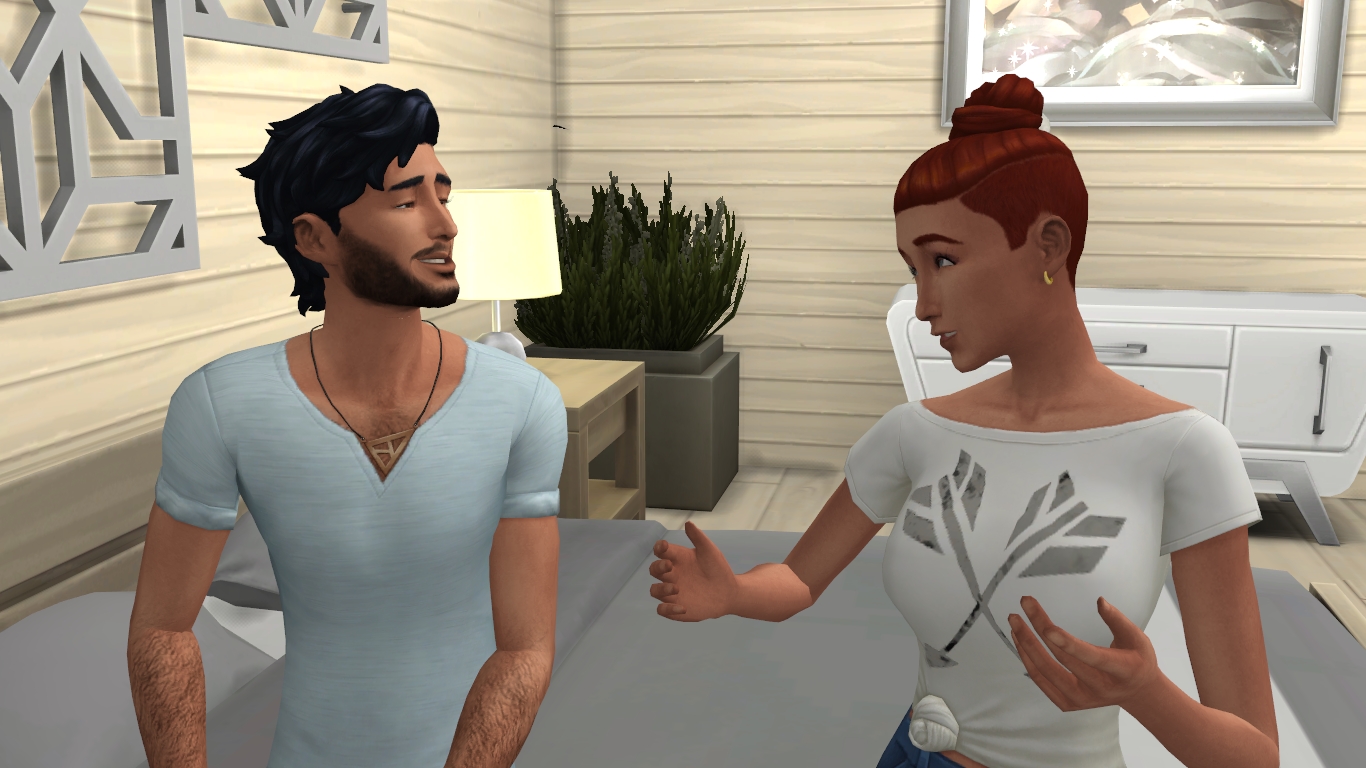 Gabriel: I need you to know something, Louise. It’s not going to be easy to say, but I want you to know it.

Gabriel: My wife and I have an open marriage, as you know. We have a child together. I didn’t come here looking for romance, I came here because the prize money would be awesome for our family and because I like a challenge. This needs to be clear.

Louise: *turns pink* I hear you.

Gabriel: But I slept with China, and I slept with Charlee. I’m not going to go into that because it’s not worth it, but you have to know that I don’t feel anything for Charlee, and I only see China as a very good friend now. You also have to understand this.

Gabriel: And now I’ve been forced to re-evaluate everything because… because I’m really into you, and I don’t know what that means for the future or what will happen with us, but I just really wanted you to know— 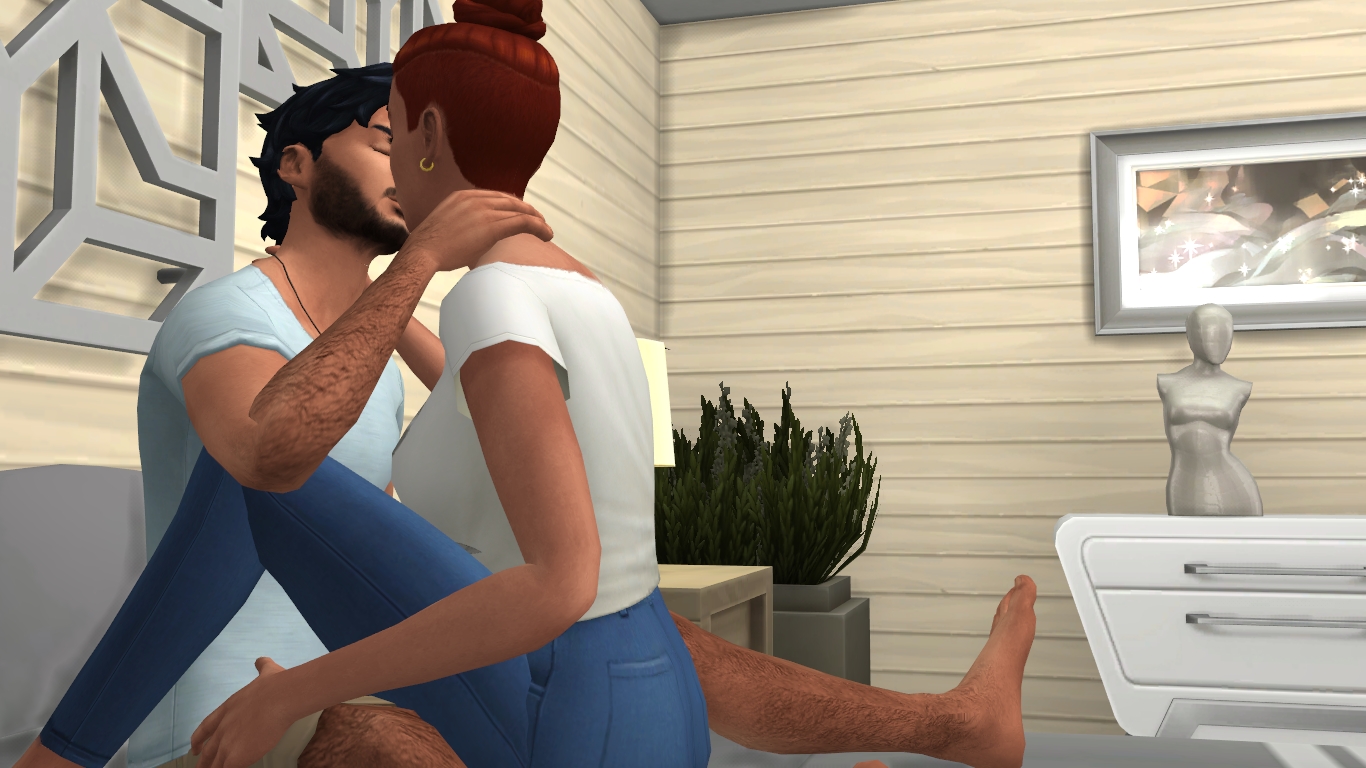 Louise interrupts him, and pushes him against the headboard of the bed. She sits between his legs and brings his face close. Gabriel hesitates for a second before giving in and kissing her lips with a small sigh. Louise leans into the kiss, letting herself relax in his arms. She feels his fingertips on her back and her skin tingles at his touch. She smiles and he kisses her smile, then her teeth. He begins to laugh as well, holding her close. She runs her hand across his cheek, feeling the rough skin of his face, loving the feeling of his warmth under her fingers. They stare deep into each other’s eyes as they lie down together; they’re not kissing anymore, just looking at each other. 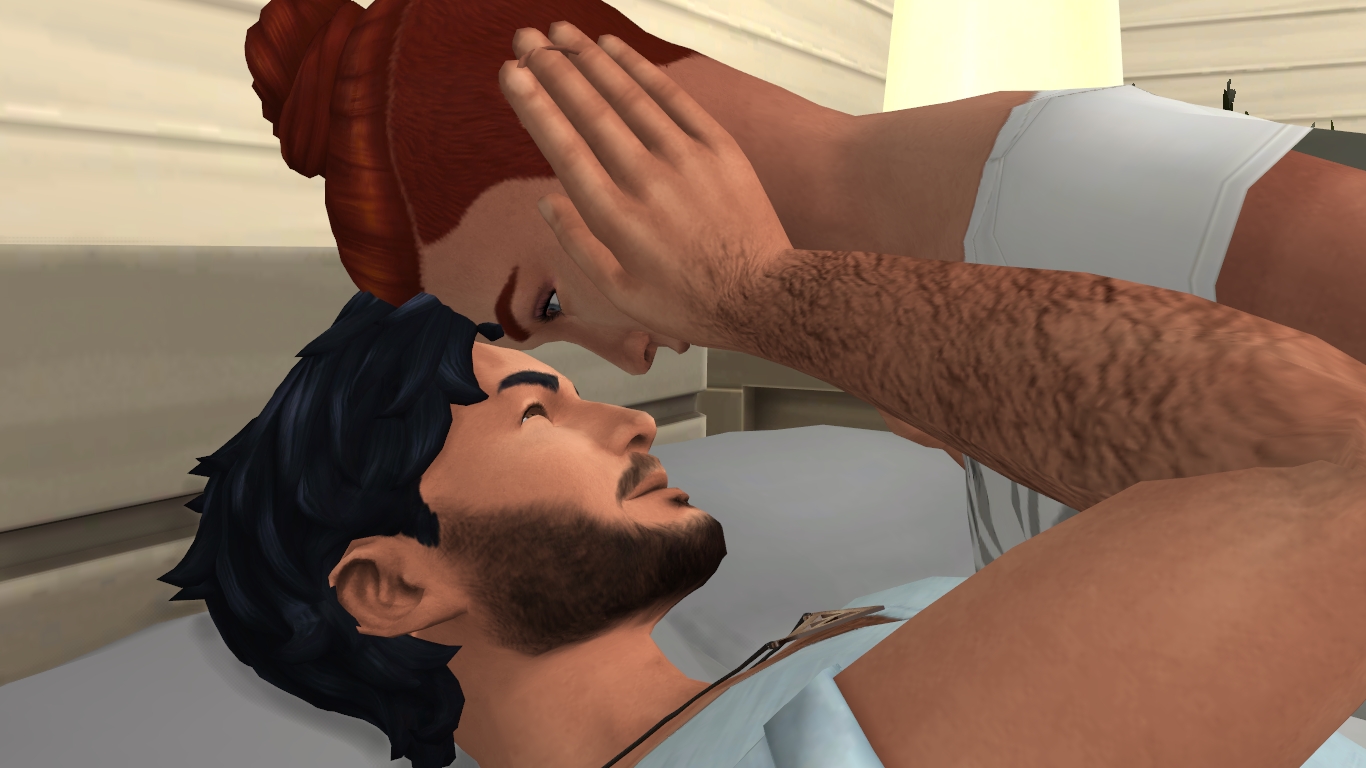 Gabriel: This isn’t what I expected to gain from this competition. 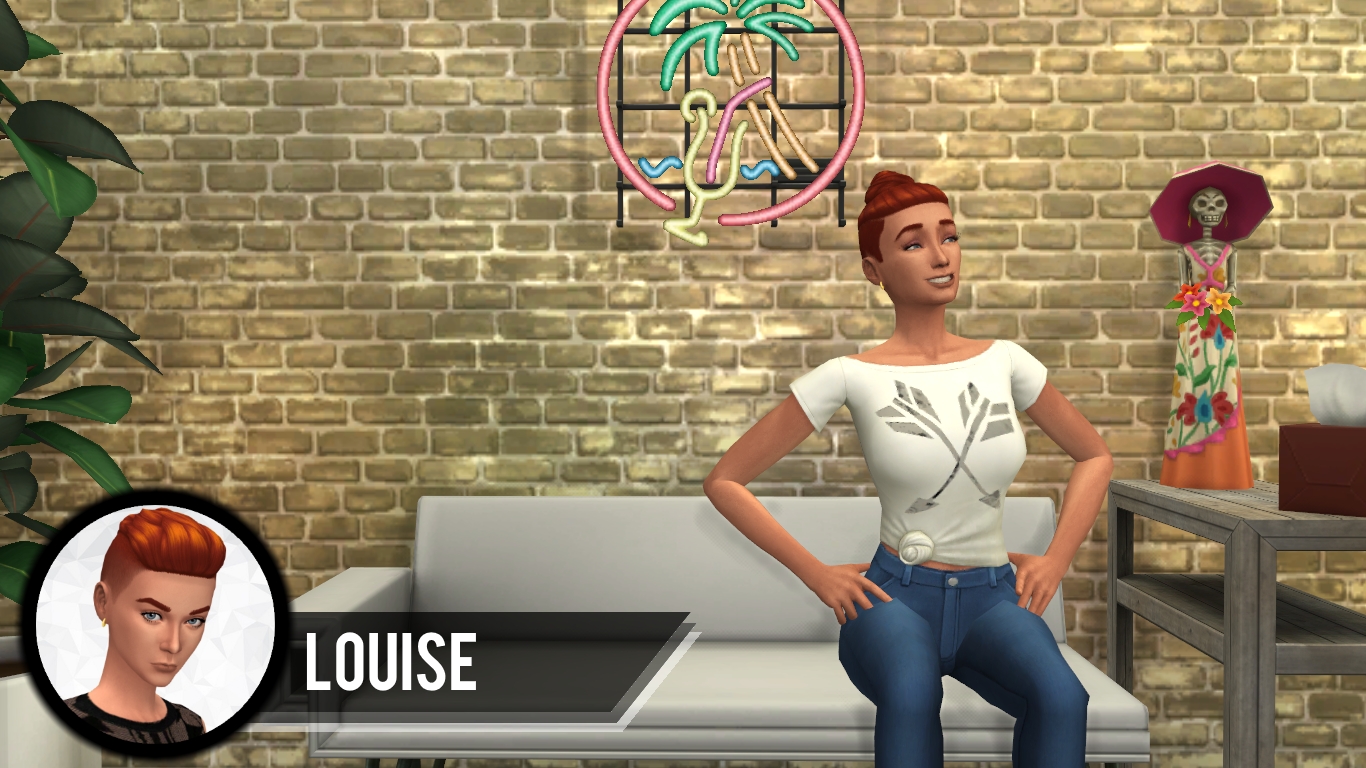 Louise: I’ve swallowed my words. It’s not going to be easy getting over the details of this, but honestly I’m floating right now.  I’m floating! That kiss… who would have thought that it would turn out this way? Not me!

The next morning, Louise can’t stop beaming. She left Gabriel’s room sometime after midnight, and she fell asleep with a smile on her face. Today, while she’s getting ready, she has a big smile on her face. Not only did she have a fantastic night, she also got the role she wanted in the show: the sexy secretary. 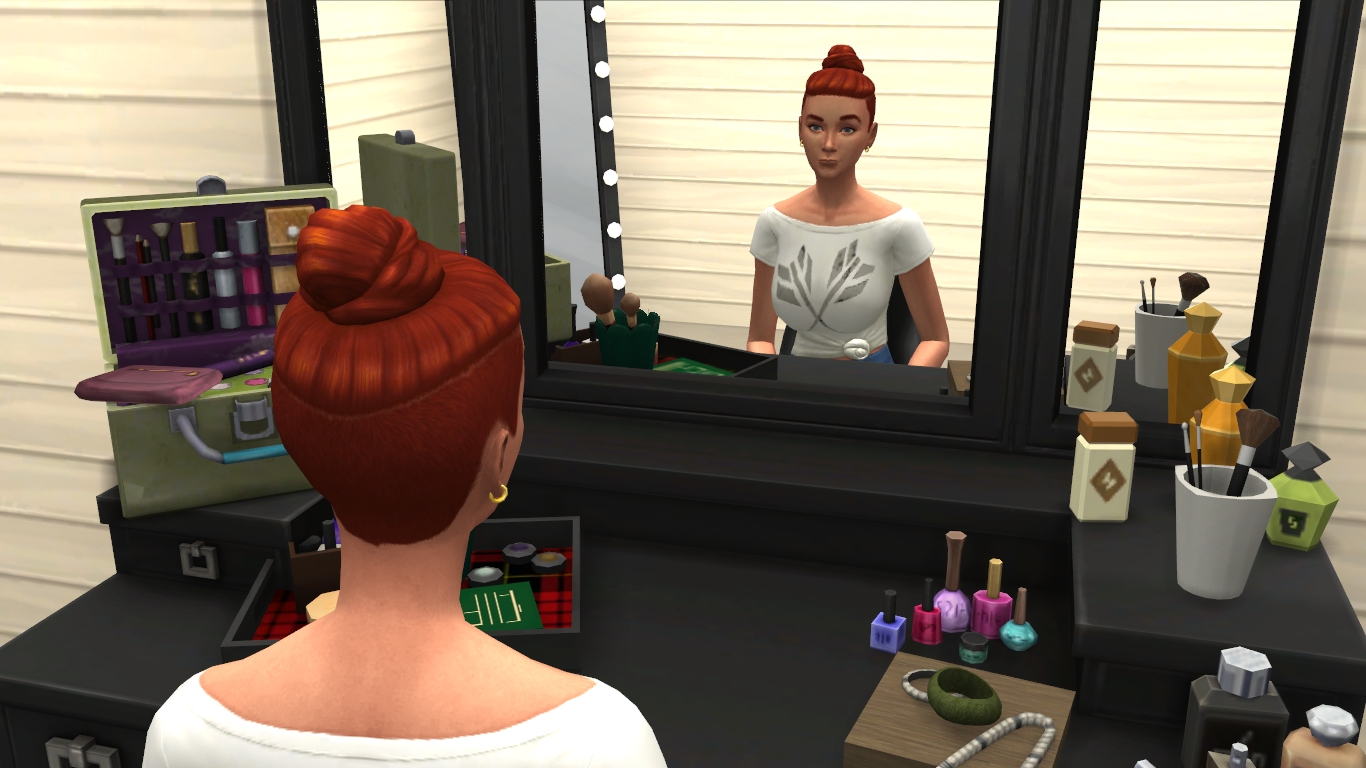 Louise: *voiceover* It’s the perfect role to play up a character! I don’t want to be myself in an acting challenge, and it’s easier to step out of my comfort zone if I’m playing someone who is the complete opposite of me. I’m thrilled! It’s perfect, too, because the flirtatious vibe I’ve got planned for my character fits my mood to a T. This is going to be a fantastic challenge! Kyungri isn’t too happy, though… oops! 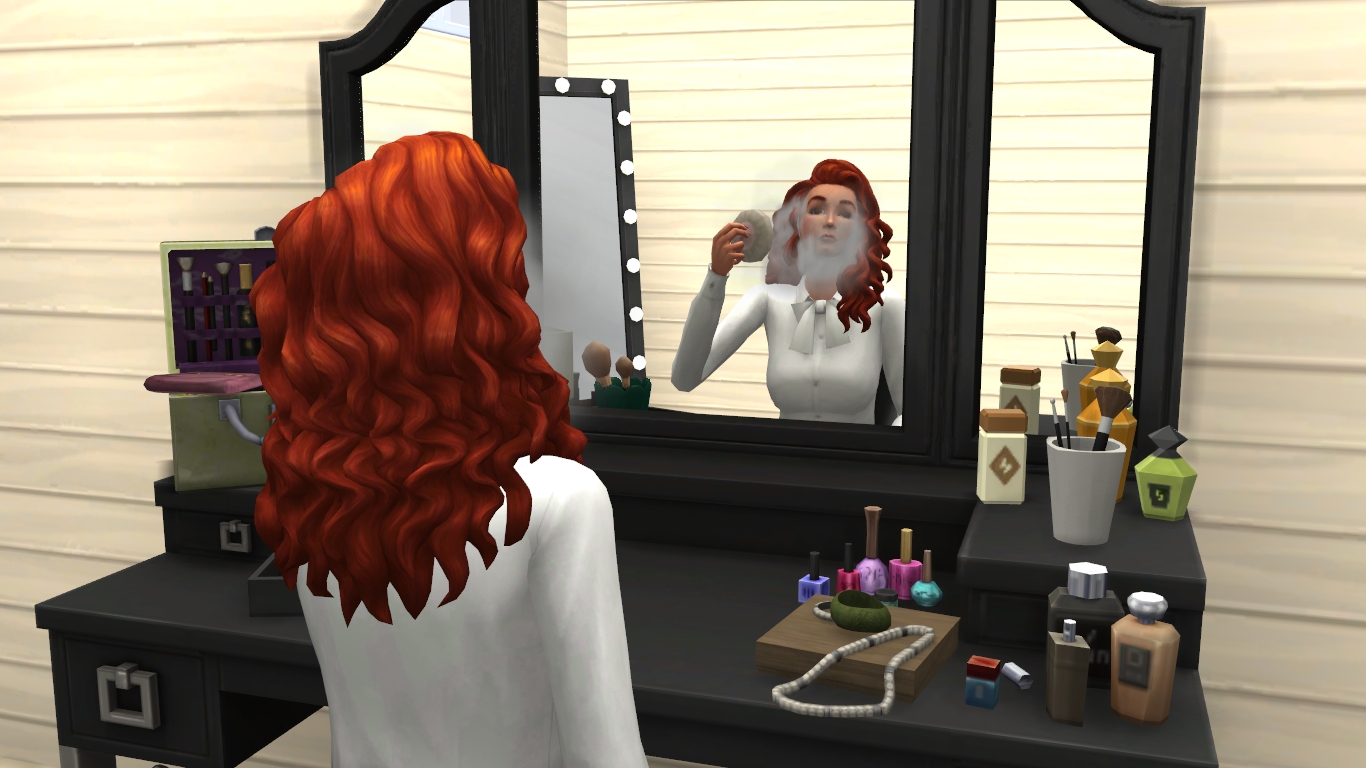 Louise: *talking to the makeup artist* So, Gabriel got the role of the business partner, do you think he’s going to be interacting with me a lot? I mean, if I’m the secretary I’m going to be dealing with the partners of the firm a lot, no? Maybe?

The makeup artist shrugs, not caring about the drama that’s about to unfold in the house. He finishes Louise’s makeup and lets his partner come do her hair while she continues to talk in the chair. She’s talking a lot without really waiting for answers. Once she’s done with hair, she gets sent to the wardrobe to get dressed, and when she comes out in her secretary outfit, she is positively thrilled. 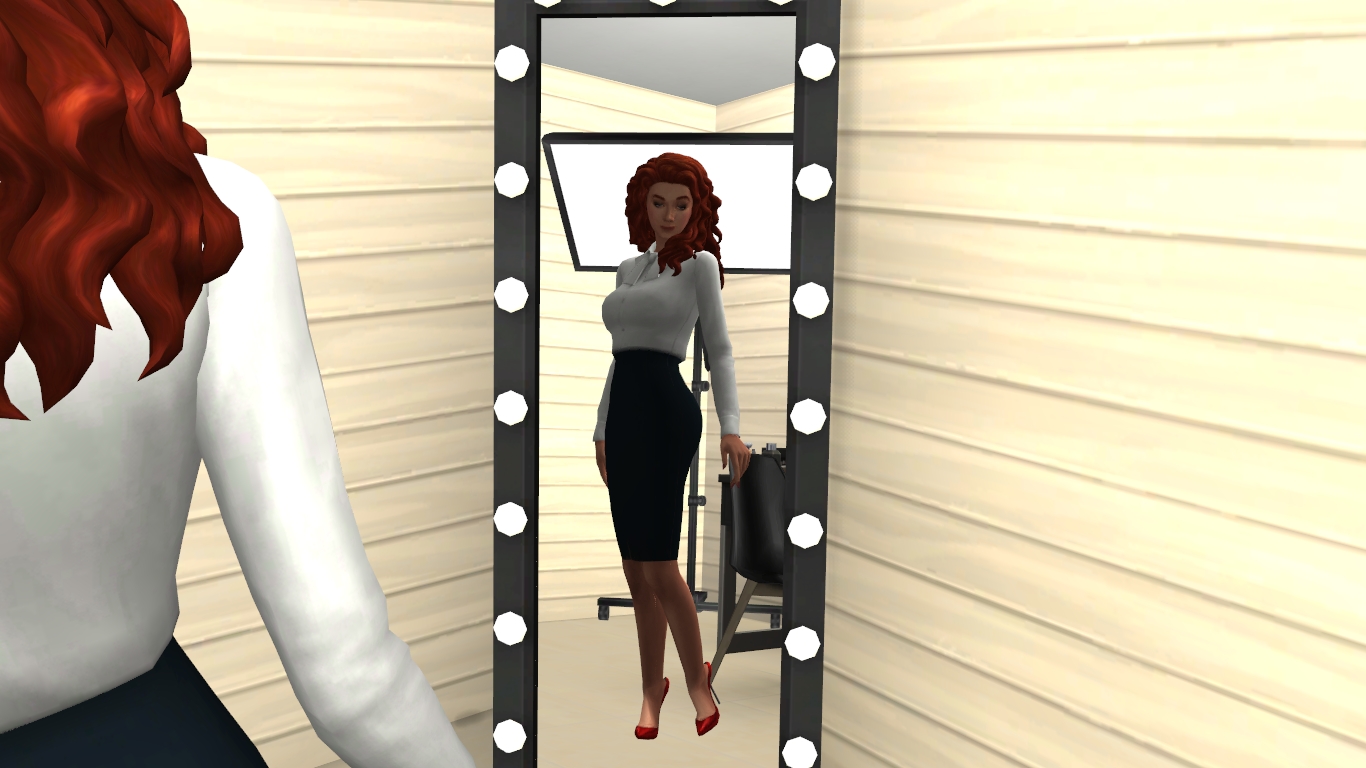 Louise: I look….. delicious. I look fantastic! I love this hair on me! And these lips… maybe Kyungri has been onto something this whole time? This isn’t the first makeover I’ve received while being here, but…. ugh, I could just take a bite out of myself!

And while Louise is admiring herself in her new getup, Gabriel is waiting for his turn to get dressed up. He’s practicing his lines but keeps thinking about last night, worried about what’s to come. 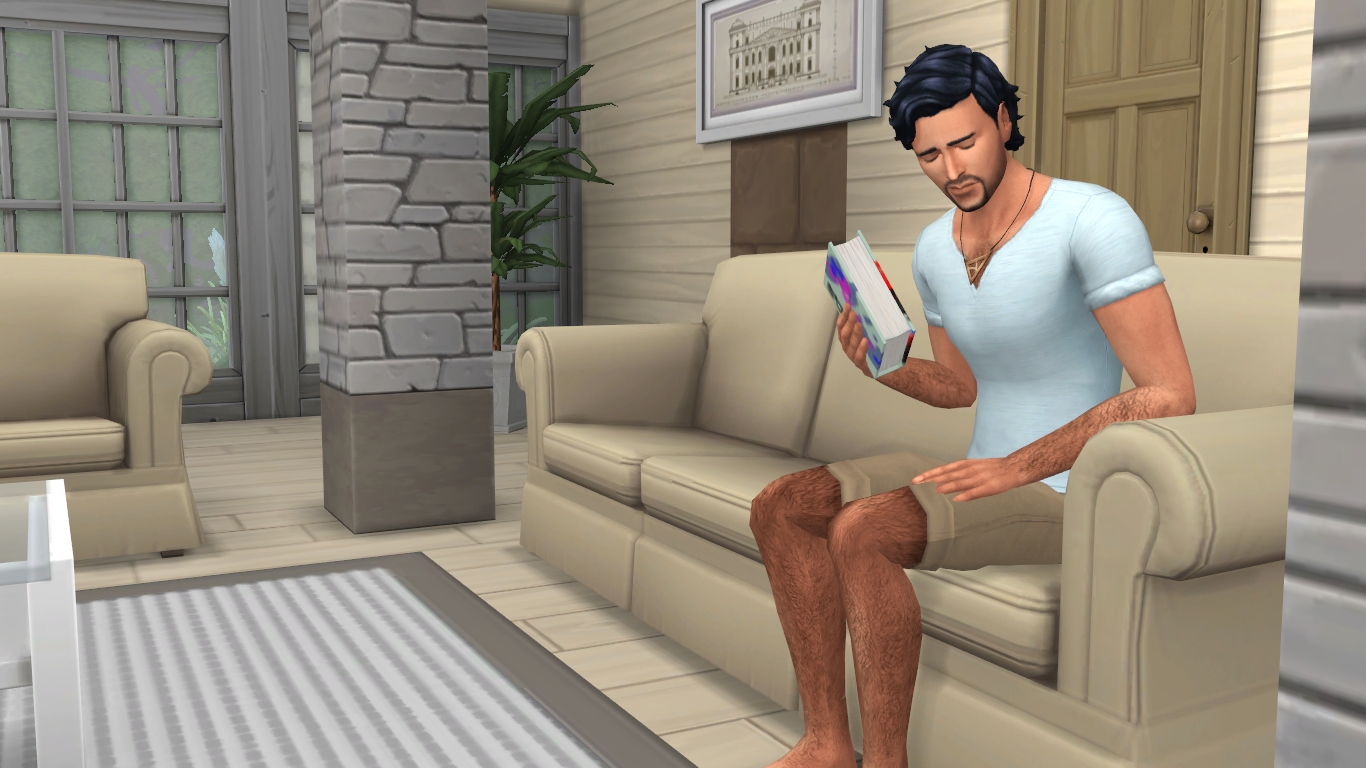 Gabriel: *voiceover* It’s not that I’m worried about…. OK maybe… no… I am… Yeah, I’m a little worried about how this is going to come off to my family. I mean, there’s always something that has to go wrong with situations like this and I just don’t want to disappoint anyone! I can’t help how I feel, but this might be more than I thought it would be. I don’t even want to think about it right now! This is crazy.

Harrison joins him in the living room, waiting to get dressed up. He’s received the role of the devilish delivery boy, and is excited about trying out that role in front of the world. He notices Gabriel’s turmoil, but is too excited about the day to come that he doesn’t initially think much about it. 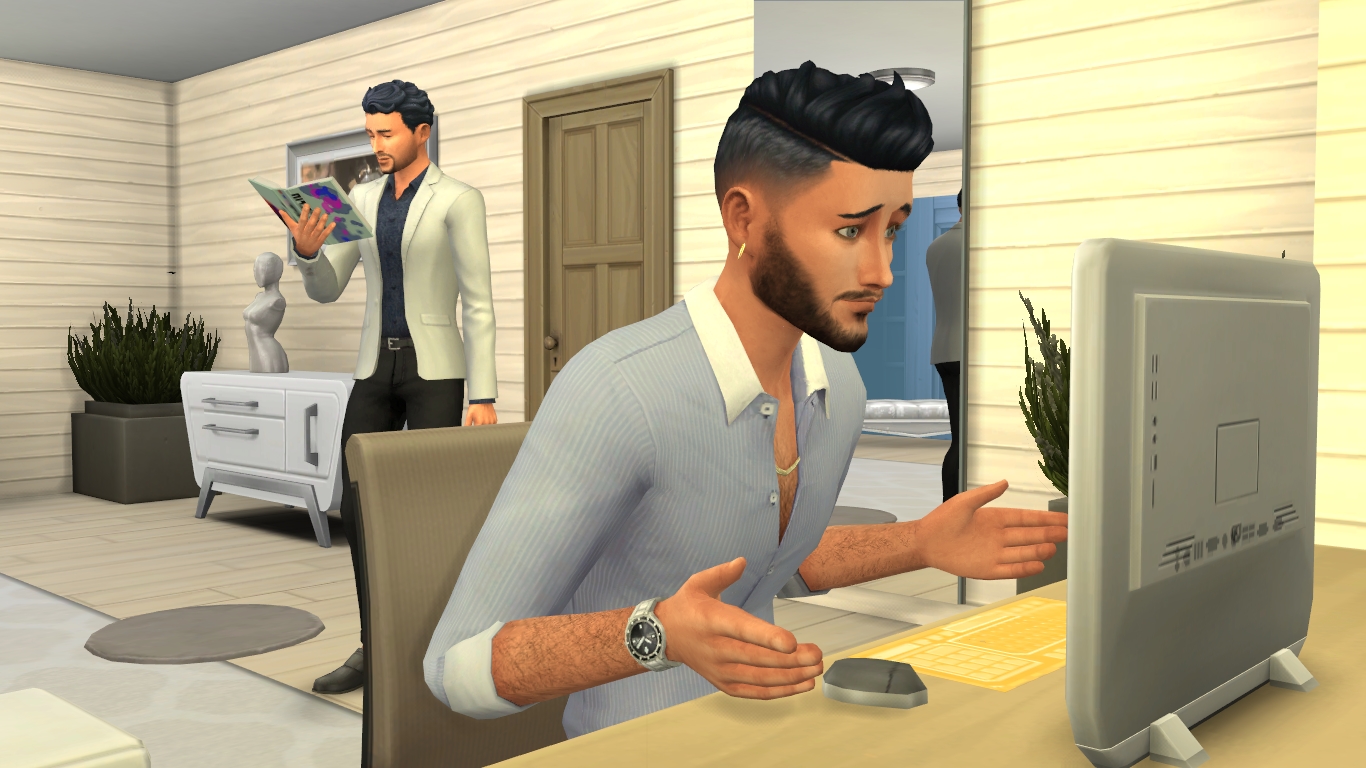 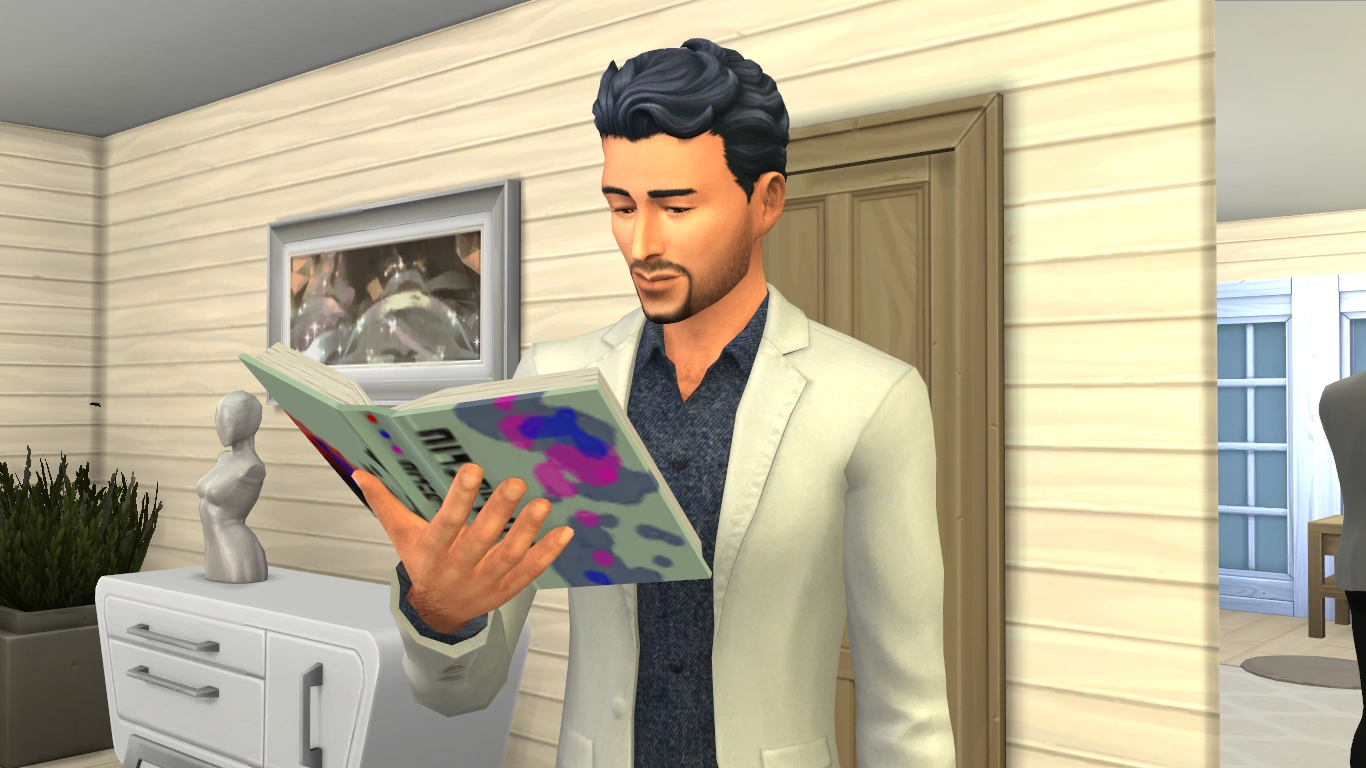 When they both come out of the costume room some time later, they have completely changed. Gabriel’s hair has been impeccably styled, his beard has been shaved down to a smaller area on his face, and his outfit looks like it’s worth a pretty penny. The transformation is even more evident in Harrison, who looks like a completely different person. His brown hair has been darkened to a jet black hue, and exhaustively styled. He’s wearing light makeup, and his beard has been lengthened. His outfit is Latino chic, with a gold chain around his neck to amplify the effect. His whole demeanor seems to have changed, as well, since he’s really taking the physical transformation as his cue to open up some more to the cameras. 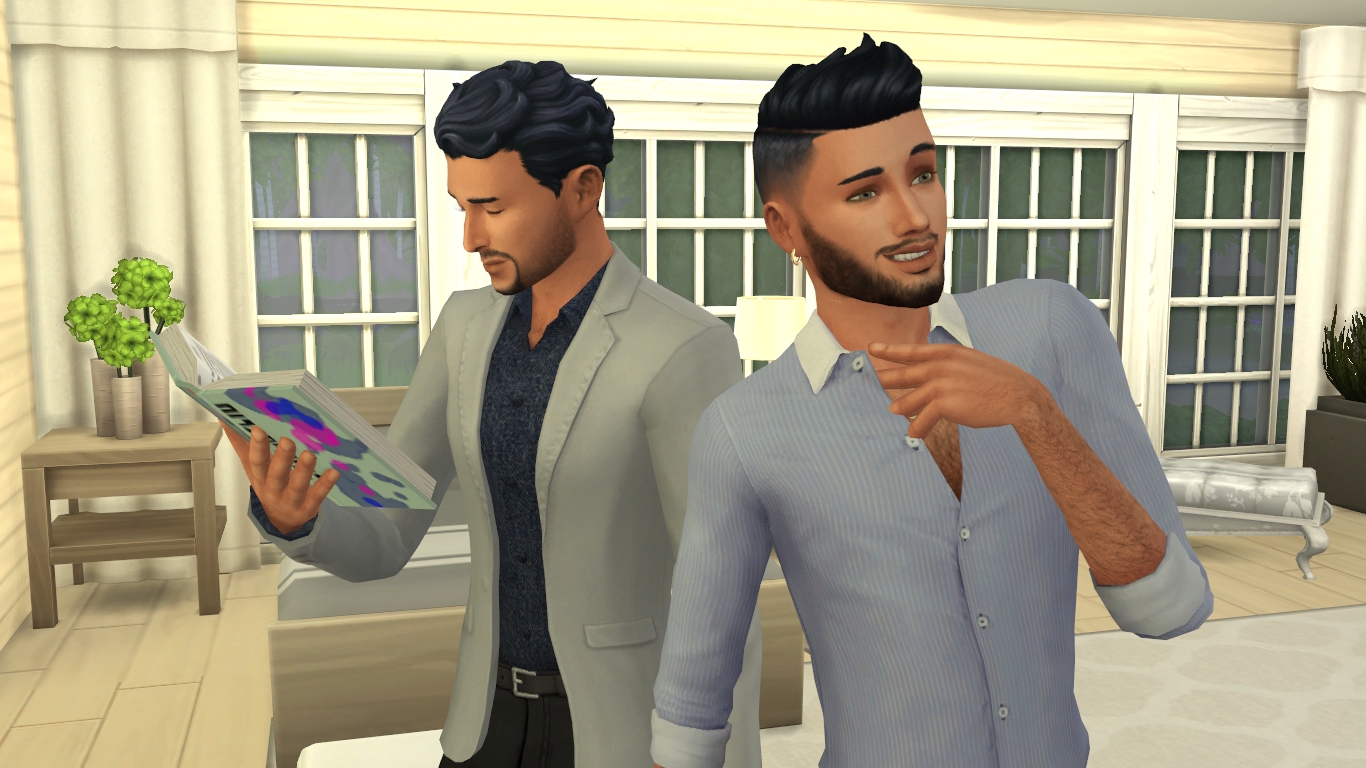 Gabriel and Harrison both look excited about the challenge, and they rehearse before heading out to the set. Harrison especially seems to be loving the change, and he puts a lot of gusto into his performance, even surprising Gabriel out of his moody cloud. Harrison laughs when Gabriel says something funny, and claps him on the back. It’s enough of a change of character for him that Gabriel is perplexed; who knew that a simple makeover could bring out such a new side to this guy?

China takes a long bath before she’s due for hair and makeup. She’s going to be playing the wife of the owner of the company in the TV show and, though she refused to get a full weave for the role, she’s going to be wearing a long lacefront and a cream dress. She’s looking forward to serving telenovela-second-wife realness on the silver screen so she’s pampering herself in preparation, going over her lines in her head as the steam floats over her body. 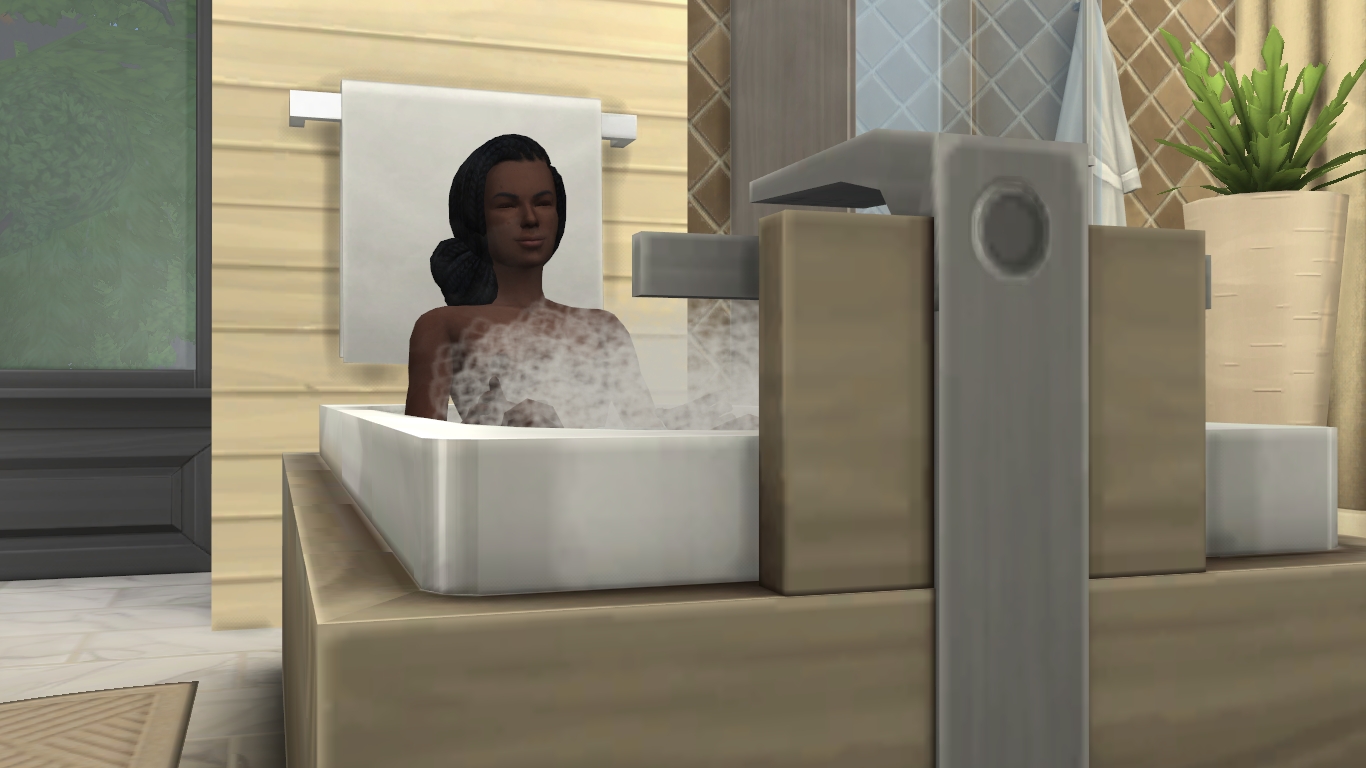 After her bath, she heads over to get ready and she has a little argument with the hair person about what to do with her box braids. She doesn’t want to cut them off quite yet, so she decides to let the hairdresser do her best at hiding them under a long, luxuriant wig. Afterwards, she’s put into a long, creamy pink dress and extravagant jewelry. She’s thrilled about how she turned out, and quite likes her long hair after all. 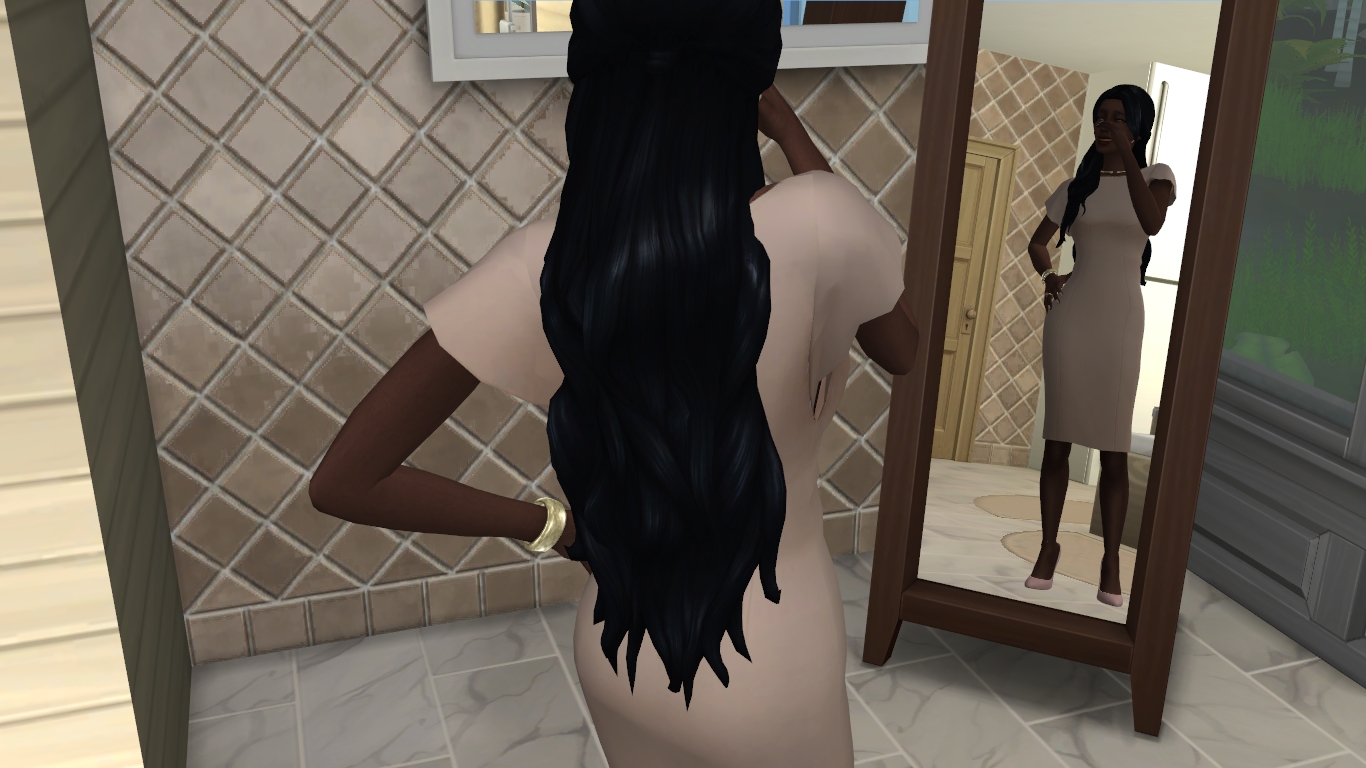 China: *voiceover* Yeah, I’m not much of a second wife kind of person though I guess I kind of came off that way when it seemed like I was going to steal Gabriel from his wife, but whatever… this role is fun! I feel like there’s going to be more to it than I can see, so it’ll be fun playing it. Plus, I look yummy! Honestly, I’m happy I didn’t get the rich daddy’s girl or the frumpy maid because I can identify with those roles even less… poor Kyungri! *laughs*

China then joins the other housemates in a van and they’re all whisked off to the set, which is a gorgeous recreation of a small town in a Mexican valley. There, they’re joined by Hudson, who’s playing the owner of the company and the head of the family. China and Hudson have the first scene to record, and they sit on a couch in one of the office sets. 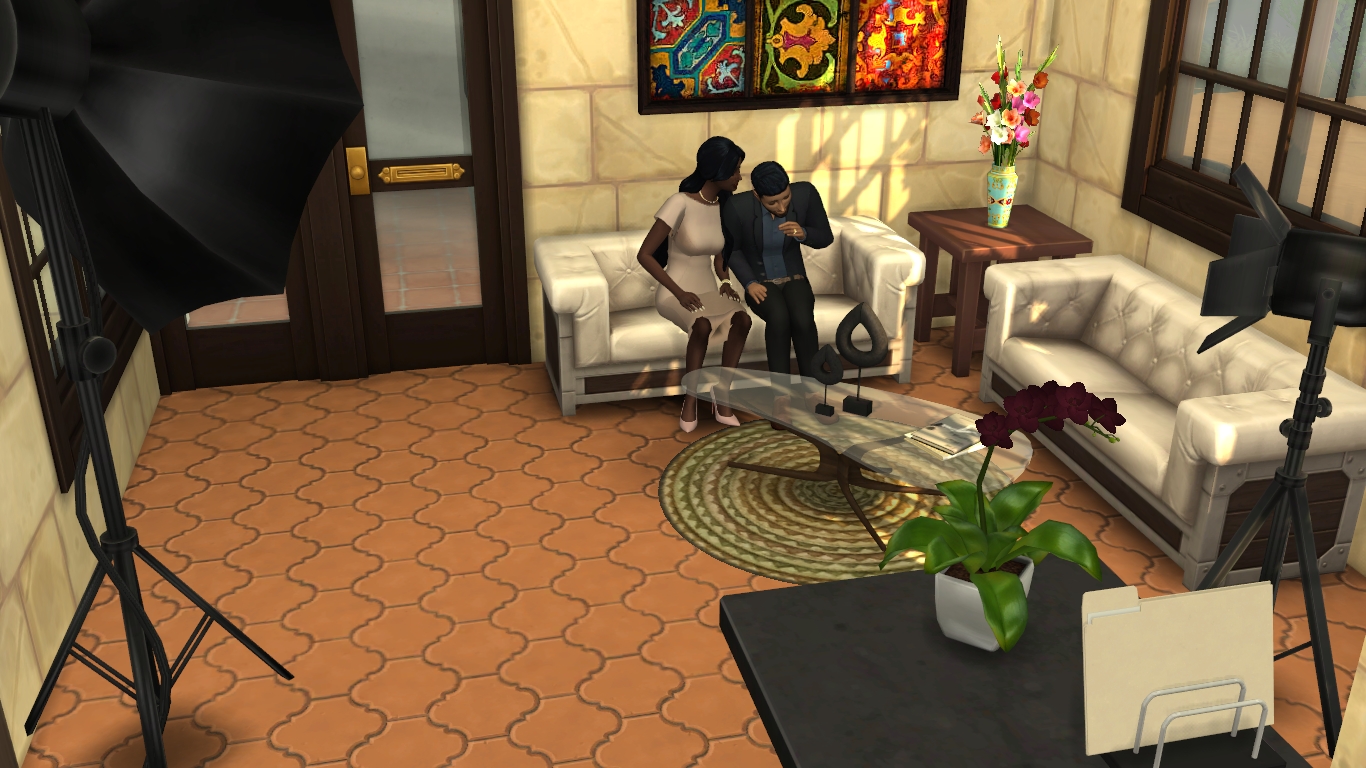 China: *in character* “…but honey… just imagine…” *she giggles* I’m sorry Hudson, is it OK if I squeeze your leg? I don’t want to come off as too forward and the script doesn’t call for it, but I think it would fit well.

Hudson: Go ahead! I like the vibe you’re giving, it’s really accurate!

China: *whispers in his ear* “…but honey…. I know you like it like this” *she squeezes his leg and he chuckles*

Soon after, the director yells “cut!” and the scene is wrapped. China is beaming, happy with her performance. 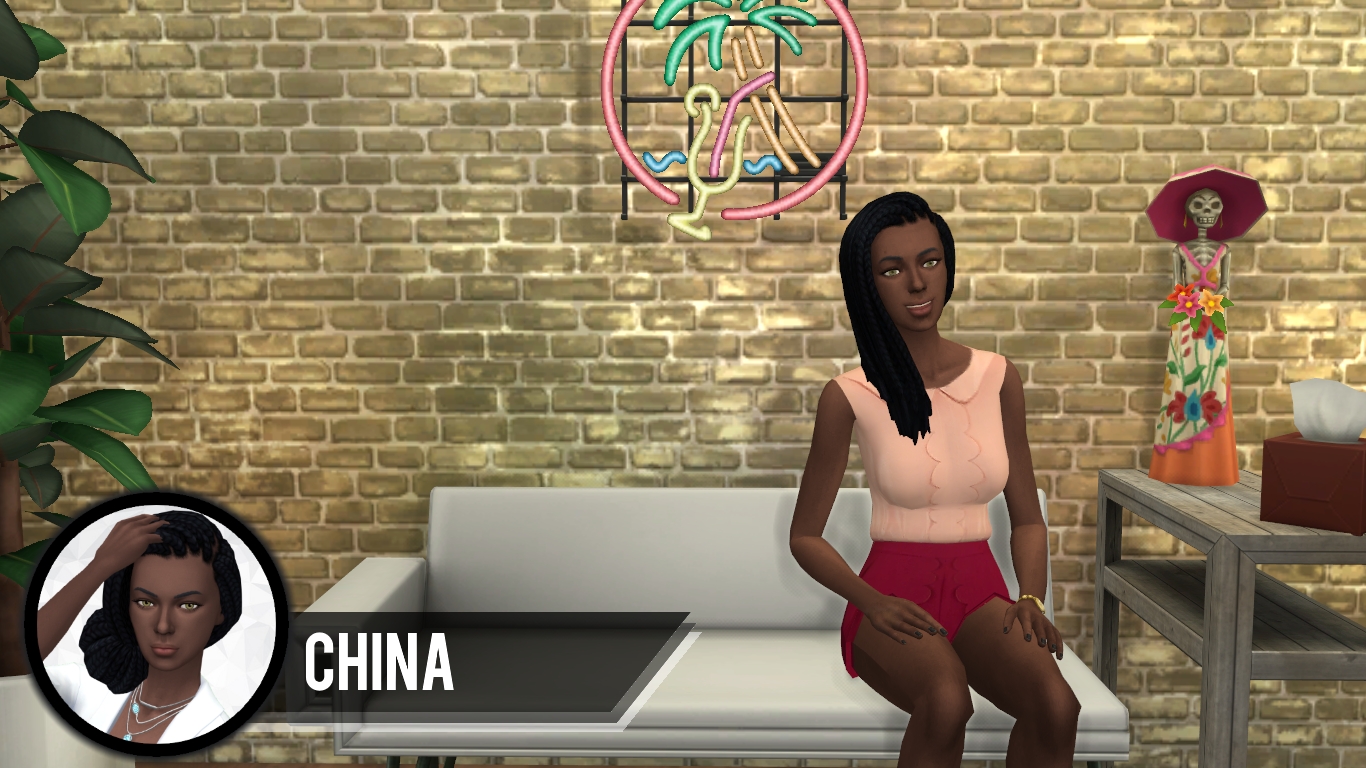 China: I killed it! I only had one other scene, but it wasn’t a problem. I think people will really be convinced about the role I was playing! It was no big deal. I got this!

After China’s done shooting, Gabriel comes in for his first scene. He’s confident in himself and it shows. He actually has to shoot with Louise but his earlier moodiness and doubt has been erased by his sheer delight at seeing Louise in her secretary outfit and hair. He performs his lines perfectly and the director is pleased with his performance. 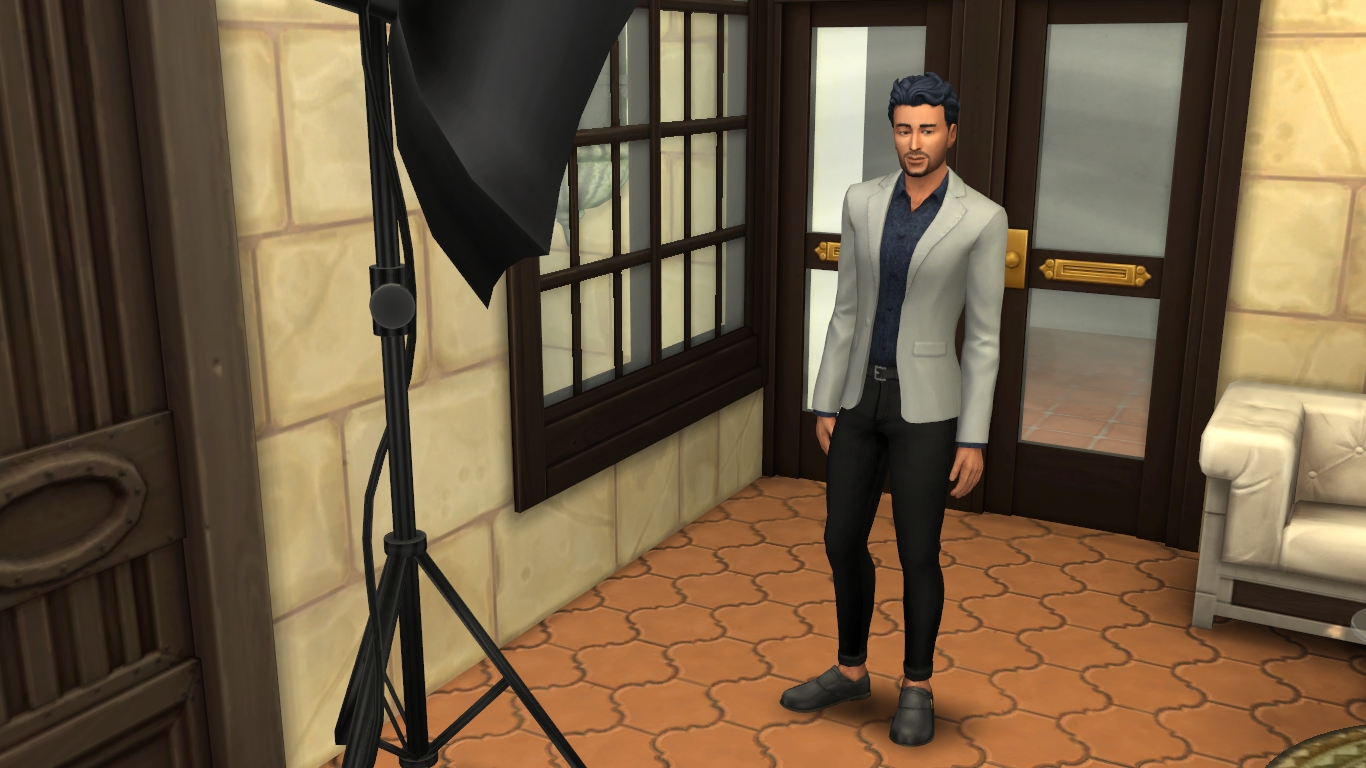 Gabriel: *in character* “I hope you don’t mind me saying this… but you’re one of the biggest… assets… to this company. Please keep up the good work!” 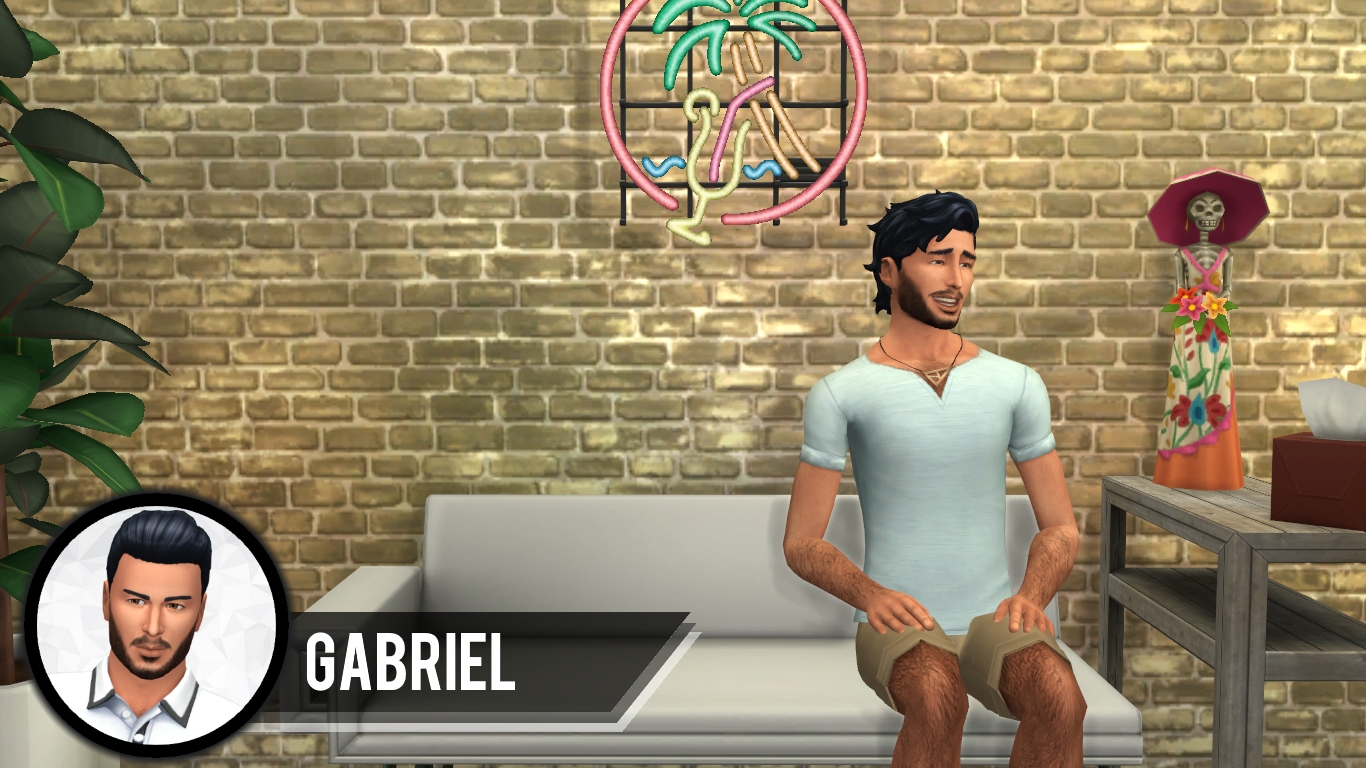 Gabriel: There were no lies there! 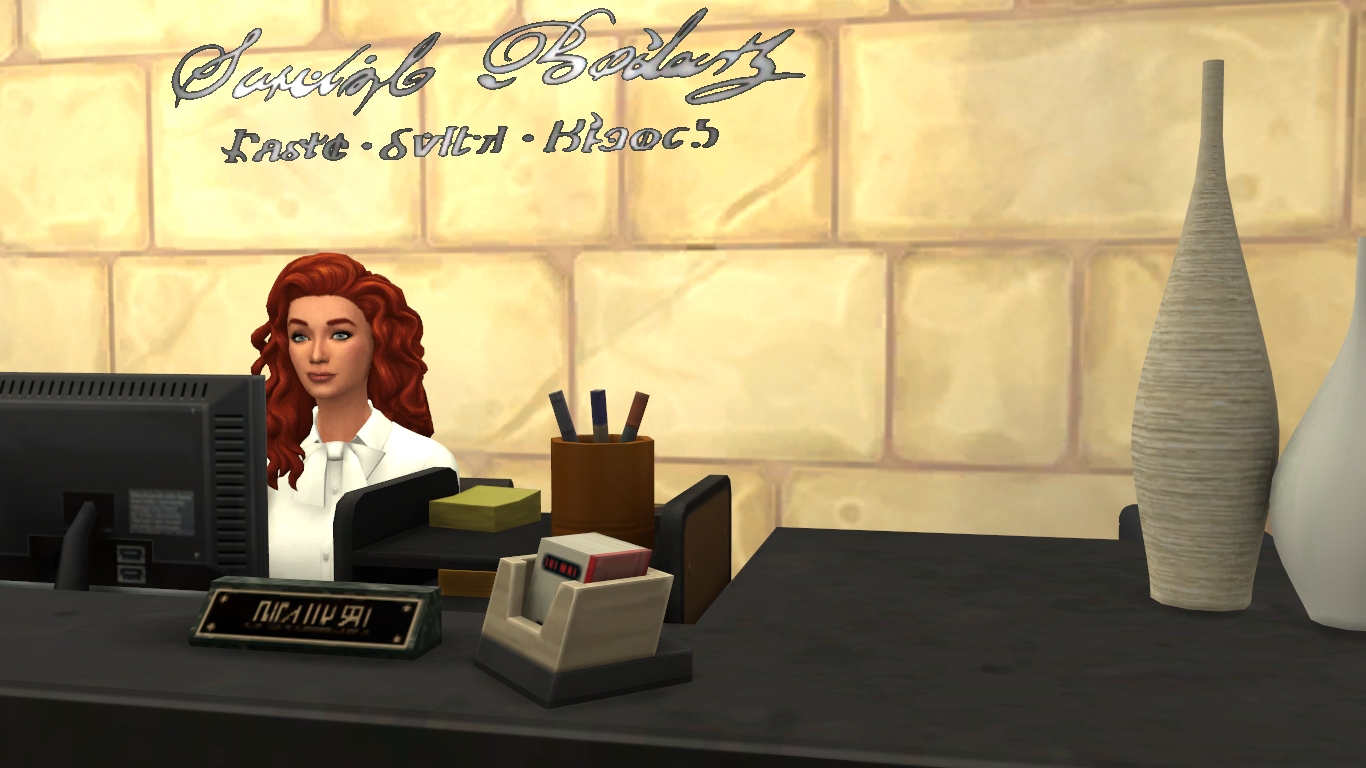 Louise: *in character* “Fired for insubordination?…I’d like to see that happen…” *she puts on her best sexy expression and bats her lashes at Gabriel* “You couldn’t risk losing your… greatest asset… now, could you?”

Their scene wraps soon after, and they both leave the set, giggling at their not-so thinly-veiled flirting. They didn’t have to fake a single moment of flirtation and they feel happy that they did an excellent job at portraying their characters. Louise especially feels like she’s breaking out of the box that she’s always been placed in and she feels happy to be doing things she never expected, such as acting on a TV show. All of the good things in her life have her smiling, and she beams as she goes to the trailer with Gabriel.